Crime dynamics at the Indo-Bangladesh border in West Bengal
14:28 pm

The porosity of the Indo-Bangladesh border permeates several outlawed activities like illegal infiltration, human trafficking, smuggling of gold, illegal cattle trade, circulation of counterfeit currency, narcotics trade and robbery. For almost three decades now, India has spent a significant sum of money on the construction of a barbed-wire fence along the 4,096 kilometre border that it shares with Bangladesh. Each year, the government spends several hundred crores in maintaining and manning this fence. The attempt that was largely intended to curb infiltration, movement of militants, and ensure enhanced management of the Indo-Bangladesh border, hasn’t been very effective. Not being fully demarcated on the ground, the fencing in many places cuts through rivers, agricultural lands, mountains, and public institutions and has resulted in the emergence of many enclaves.

The border-fencing near the districts of West Bengal is largely obstructed by legal hassles of land acquisition and by the fact that almost 30% of the border is riverine. Hence, only 60% of the 2,216.7 kilometre border that runs along the districts of North Dinajpur, South Dinajpur, Malda, Murshidabad, Nadia, North 24 Parganas, and South 24 Parganas of West Bengal has been properly fenced so far.

The latest Census figures of 2011 show that the demography of almost six border districts of West Bengal have dramatically changed because of illegal migration. The average population growth rate of West Bengal after every Census is over 20%, and the figures are abnormally high in the districts bordering Bangladesh namely North Dinajpur (34%), North 24 Parganas (31.69%), South 24 Parganas (30.24%), Nadia (29.95%), and Murshidabad (28.20%).

North Dinajpur remains particularly susceptible to cross-border migration due to its geographical location. Tanmay Chakraborty, Prasar Bharati correspondent, North Dinajpur, says that the border along the district is difficult to monitor as the upper half is riverine. Vigil along the boundary can only be ensured effectively by continuous patrolling and installing flood lights. “In areas like Basirhat, Hingalganj, and Hashnabad of North 24 Parganas, illegal infiltration is assisted by touts locally known as ‘Dhurhs’, who generally charge anything between a few hundreds and a few thousands. A whole lot of people from Bangladesh enter India through these bordering districts for access to better and cheaper health facilities, albeit illegally,” said Niranjan Bandhopadhayay, retired All India Radio correspondent, North 24 Parganas. 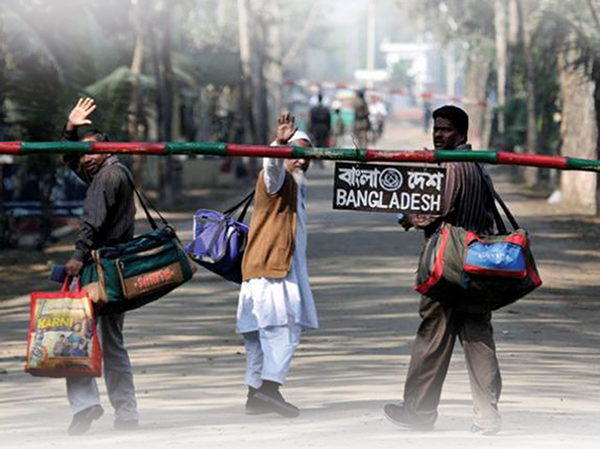 Amidst claims of enhanced vigil, another crime that flourishes in these areas is cattle smuggling. Bangladeshi cattle markets, known as ‘khattals’, are brimming with cows and oxen from West Bengal. Subhendu Bhattacharya, AIR correspondent, Cooch Behar, said, “The cattle trade on the Indo-Bangladesh border is worth millions annually. A major reason for the flourishing trade is that the demand for beef in Bangladesh is quite high but the supply is limited. On the other hand, India as a cattle surplus country has a fairly low demand for beef.” Estimates suggest that about 20,000 to 25,000 cattle heads worth $81,000 from India are smuggled daily into Bangladesh. The primary motivation is of course profit as the demand-supply equation keeps the price of cattle quite high in Bangladesh.

West Bengal is also a hub of cross-border human traffickers. PS Jaiswal, PRO, DIG, South Bengal Frontier, said, “Districts like North Dinajpur, South Dinajpur, Malda, serve as transit points for poor and gullible people, mostly women and children who are promised lucrative jobs in states of India, Pakistan and even the Gulf.” Even though a number of NGOs in West Bengal are working for internally trafficked people, there are only few working for cross-border victims of trafficking. The definition of human trafficking under Section 370 of the Indian Penal Code only deals with trafficking of people for exploitation, it doesn’t adequately address the issue of trafficking for the purpose of labour. Also, once a cross-national victim and trafficker are arrested, they are both charged under the Foreigners Act of 1946, according to which the offender and the trafficked person are both punishable due to their unlawful presence within India.

Apart from these, the district of Malda is the ground zero of the fake currency network in India, with counterfeit notes making their way in from Bangladesh through a porous border. Many residents of the town make their living from this illegal trade, mostly working as couriers. 15 heists involving fake currency notes have been reported from the district this year.  Security officials informed, “From the point of origin of the consignment in Bangladesh to the destination in Kaliachak, there would be almost 20 couriers in each chain. Each person in the chain normally covers a distance of a few 100 meters to hand over the consignment to the next one in the chain. It is an intricate network, difficult to trap.”

South Dinajpur and Cooch Behar have rampant cases of gold smuggling. Earlier in April this year, Directorate Revenue Intelligence (DRI) seized 105 kg of the precious metals that were smuggled from Myanmar and Bangladesh. Clearly the alleged smuggling nexus is deep. In an interview to The Indian Express, the BSF Director General had informed, “In 95% places it (single-row new fence) has come up. Work is ongoing at remaining few locations.”

Speaking about the preventive measures and level of alertness, PSR Anjaneyulu, IPS, Inspector General, BSF, South Bengal Frontier, Kolkata, informed BE, “Analysis of crime pattern is done on a regular basis as per operational exigencies. Sensitive points on the basis of seizure and threat perception are defined, extra manpower is provided to strengthen the sensitive area, additional surveillance equipment is provided in vulnerable areas, joint operations with police and other agencies are conducted and regular meetings with counterparts are held at all levels.” He added, “Due to Rohingya issue we have identified more vulnerable points and have strengthened the points by providing extra manpower and equipment. We are successfully guarding our border and apprehended four Rohingya Muslims in three cases who tried to cross the border.”

However, over the past 10 years Border Security Forces (BSF) of India in its attempt to ensure maximum security has killed almost 1,000 people who were mostly Bangladeshis. No one has been prosecuted for any of these killings, in spite of much evidence of these being cases of human right violations.