Swayangsiddha: The fight against trafficking of women
15:45 pm

Globally, human trafficking and especially trafficking of girls/women remains a major problem. The purpose behind trafficking of girls/women has conventionally been sex slavery, sexual exploitation, and forced labour. The district of South 24 Parganas is one of the largest districts in West Bengal and the sixth most populous district in India. It borders the city of Kolkata on one side and on the other, the Sunderbans. This district is highly heterogeneous and has a sizeable minority (Muslim) population. Parts of the district remains economically backward and large sections of its rural population are dependent on agriculture and pisciculture. Economic marginalisation of a section of its population leads to unaffordability of education for their children. Economic marginalisation has also led to many cases human trafficking in this district. In such circumstances, the Additional Superintendent of Police (West) South 24 Parganas, Chandra Sekhor Bardhan and Nihar Ranjan Raptan of Goranbose Gram Bikash Kendra (GGBK), in association with Srei Foundation, have come forward to save girls and women from the clutches of the traffickers through an innovative initiative- Swayangsiddha.

The Swayangsiddha initiative was designed for a small area but it soon encompassed the whole district. Ajay Mukund Ranade, the Inspector General of Police, Dr. Anirban Dutta, animal rights activist Pronay Dutta and Dr. H.P. Kanoria have all extended their support to this initiative which rescues trafficked women and provides them with rehabilitation and support. Around 1242 girls have been rescued under this initiative and around 1100 girls have been rehabilitated.

The GGBK undertakes a number of projects to rehabilitate the victims of trafficking, including those coming from Bangladesh. The GGBK acts as buffer to gather, process, investigate, and disseminate information that enables law enforcement agencies and decision-makers to enact appropriate laws and guidelines regarding human trafficking. The GGBK’s unique style of advocacy helps parenting education and public awareness, leading to a large network and community resilience against trafficking. It is a well-known truth that many trafficked women become victims of stigma when they are rescued and reinstated in their
families. Many lose their social relations. These women often need support to earn their livihoods. The initiative provides them with such options. 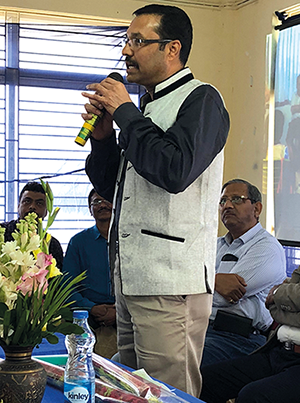 Swayangsiddha is a highly structured initiative. The women are rescued and counselled. Their psychological needs are addressed. After that, they are provided with different types of vocational training. Most of the women rescued under this initiative have been successfully rehabilitated, having jobs and families. The initiative entails encouraging familial support for these victims. According to Ranade, “We can solve any problem and will go ahead, this should be the belief. Awareness should be generated by the victims who have been rescued.” He has proposed to create a fund for this project.