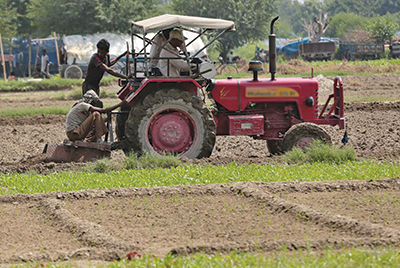 Soon after Prime Minister Narendra Modi took office in 2014, he called for converting challenges faced by farmers into opportunities. He urged Indian states to prioritise the agriculture sector with a target of doubling the income of the farmers by 2022. Agriculture should be made employment-oriented to make it attractive to the new generation cultivators and its growth must keep pace with the manufacturing and service sectors.

India holds the second largest agricultural land in the world. It is the largest producer of spices, pulses, milk, tea, cashew and jute. India is the second largest producer of wheat, rice, sugarcane, cotton and oilseeds. It is second in the global production of fruits and vegetables, and is the largest producer of mango, banana and grapes. Yet, as per the latest FAO estimates in “The State of Food Insecurity in the World, 2015” report, 194.6 million people are undernourished in India. By this measure, India is home to a quarter of the undernourished population in the world. Also 51% of women between 15 and 59 years of age are anaemic and 44% of children under five are underweight.

It would be a simplification of fact to relate the incidence of starvation to the growth of foodgrains production alone. But since the majority of these hungry people live in villages where agriculture is still the primary economic activity, the onus to provide food to these people falls on the sector.

Low yield is behind poor return

The Prime Minister has called for transforming the sector and doubling the income of the farmers by 2022. If the move needs larger investments in the sector and shifting to high value crops, the primary objective must be to raise the crop yield of Indian farms. The negative consequences of low agriculture yields extend from precarious incomes of farmers to large tracts of land locked in low value agriculture, despite growing demands for high value products. According to NSS data, the average annual income of the median farmer net of production costs from cultivation is less than `20,000 in 17 states. This includes produce that farmers did not sell (presumably used for self consumption) valued at local market prices. Given high wedges between retail and farm gate price, this might underestimate income but it is still low. Moreover, the variance in agriculture income between the more and less productive states is also very stark.

An increase in farm productivity will not only raise overall foodgrains production in the country but it will also increase the earnings of the farmers, the precondition for energising the rural economy. As it is, yield rates of major cereals in India are precariously low when compared with the global averages.

Take the case of rice, India’s main cereal. In 2016-17, the country produced 110.15 million tonnes rice from 43.19 million hectares of land at an average yield of 2.5 tonnes per hectare while world yields remained a little varied year-to-year at a robust 4.6 tonnes per hectare in 2016.

China and Brazil had yield rates of 4.7 and 3.6 tonnes per hectare respectively, in 2015. That is, if India’s productivity was equal to that of Brazil, it would have produced 155.48 million tonnes of rice in 2016-17 with the same amount of land. At China’s yield rate the Indian rice production during this period would have been a mind-boggling 203 million tonnes. Egypt leads the world in rice yields currently and at Egypt’s yield rate, India could nearly triple its rice production devoting the same amount of land.

Higher yield rate would increase farm output raising farmers’ income. It would make available larger grains for the Indian masses. But what is probably more important is that it would drastically reduce the amount of land needed to produce the current quantity releasing a vast amount of land for other purposes.

The government’s own Economic Survey has, in fact, pitched strongly for such a transformation. Low productivity has required larger land to put under cereal production and agriculture “has become cereal-centric and as a result, regionally-biased and input-intensive (land, water and fertiliser). Rapid industrialisation and climate change are raising the scarcity value of land and water, respectively”, the Survey observed.

If Indian agriculture has to be globally competitive, it needs investment in infrastructure such as irrigation, watershed development, rural electrification, roads, markets, in close coordination with institutional infrastructure, such as credit institutions, agricultural research and extension. Rural literacy determines the nature and the magnitude of agricultural output in India.

What happened to this rise in production? Farmers were often compelled to sell them at unremunerative prices. The government bought them and staked at FCI warehouses to rot.  The stocks under public distribution system increased three times in the last 10 years from 19.75 mullion tonnes in 2007-18 to 57.80 million tonnes in 2017-18.

The distress sales apart, Indian agriculture needs investment in infrastructure that can promote efficiency by reducing transaction costs and market risks. It has been estimated that loss of primary produce before reaching the market due to lack of proper handling, cleaning, sorting, grading and packaging facilities at the village level is about 30-40% for agricultural produces such as grains, fruits and vegetables indicates the FICCI-KPMG ‘Enhancing Competitiveness of Indian Food Chain’ report.

A stimulus is needed for sectors that support the agricultural and farm sector such as warehousing, logistics, cold chain, and transportation etc. The agriculture sector cannot prosper unless these support sectors prosper.

India has come a long way from being a food-deficit to a food surplus country. With its varied agro-climatic conditions and large production base, the country has become a leading exporter of fresh and processed food products. Indian agricultural/horticultural and processed foods are exported to more than 100 countries/regions; chief among them are the West Asia, Southeast Asia, SAARC countries, the EU, and the US.

But Indian exporters of agricultural products continue to face rejections and bans in key markets and most of these are related to non-compliance with food safety and health standards. Such non-compliance is because of several reasons including pest infestations, presence of chemical residues that are banned by the importing country’s national food law, higher than maximum approved levels of chemical residue and food contamination due to germination of bacteria. Rejection and/or bans have not only led to loss of income for exporters, farmers and processors, but also loss of market to exporters from other developing countries who are able to meet the food safety and health standards of importing countries.

India needs to reverse this trend and this can be done with institutional support and government’s strict vigilance to comply the international food standard.

Jaitley’s latest Budget seems to have shifted focus on rural India with the spotlight on rural infrastructure and the distressed agriculture sector. Very early in his speech, Jaitley declared that the “Government is committed to the welfare of farmers. For decades, the country’s agriculture policy and programme had remained production-centric. We have sought to effect a paradigm shift. … Our emphasis is on generating higher incomes for farmers. We consider agriculture as an enterprise and want to help farmers produce more from the same land parcel at lesser cost and simultaneously realise higher prices for their produce. Our emphasis is also on generating productive and gainful on farm and non-farm employment for the farmers and landless families.”

The Budget announcements for the farm sector come against the backdrop of a protracted period of rural distress, due to consecutive years of drought in 2014 and 2015, followed by a collapse in farm gate prices in 2016 and 2017. India’s agriculture growth rate between 2014-15 and 2017-18 averaged less than 2% a year, leading to near stagnant farm incomes.

The question is: How to double farmers’ income by 2022 or in four years? First, the FM has proposed to raise the MSP by 1.5% of input costs for all crops. This facility is already available for rabi crops which account for about half of the total foodgrains production in the country (rabi crops’ share was 137.2 million tonnes or 49.8% in total foodgrains production of 275.7 million tonnes in 2016-17).

But will an increase in MSP help the farmers? As per the Shanta Kumar Committee, only 6% farmers get the benefit of MSP. If this is true, the raising of the MSP by 1.5% of input costs as proposed in the last Budget will have no meaning for the remaining 94% of the farmers. Modi has to come out with alternative schemes to raise farmers’ returns.

But whatever schemes the government may come out with, they will only help temporarily. A long-term solution to farm sector’s problem lies in developing the infrastructure which will assure higher productivity, better connectivity, larger marketing avenues and up-to-date information base on weather, soil, and market.