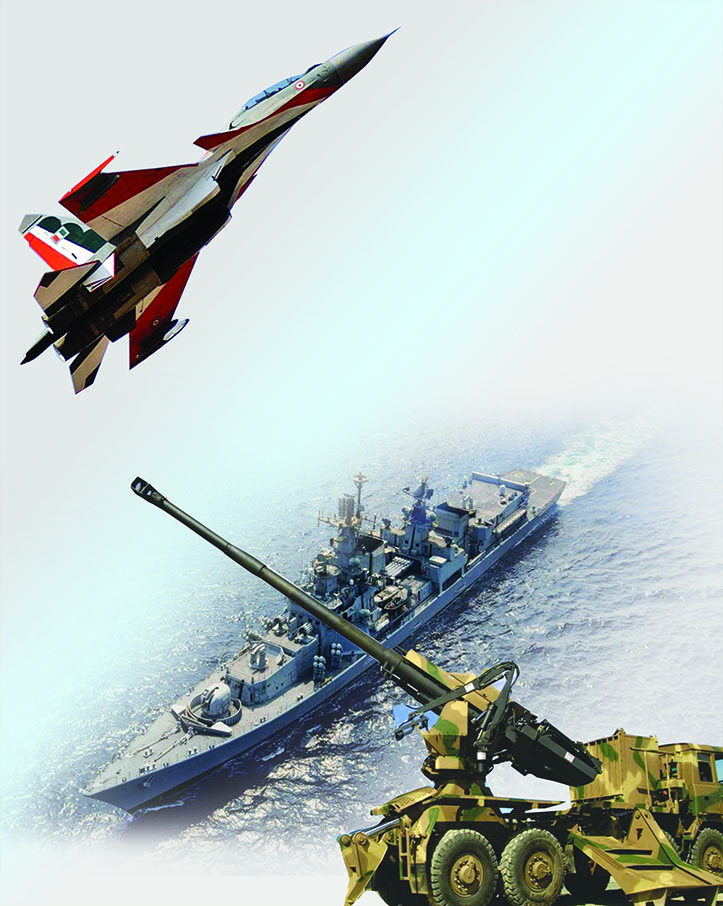 Dependence on imports and buying foreign military hardware without active domestic innovation and possession of core technologies made China suffer a 100-year of humiliation under foreign powers during the 19th century. Then started its journey towards self –sufficiency and presently China has fully developed a home-production base. A painful lesson is a lesson well-learnt.

India has the third largest army, the fourth largest air force, and the seventh largest navy in the world. India, being world’s largest arms importer, allocates about 1.8% of its GDP towards defence spending, of which 40% is allocated to capital acquisitions but only about 30% of India’s defence equipment is manufactured in India. Even when defence products are manufactured domestically, there is a large import component.

All these factors make a compelling case for implementing a ‘Defence Procurement Policy’ for promoting domestic defence industry with 100% FDI.  The large outlay for defence spending should therefore reflect this approach, wherein preferential treatment is given to “Buy (Indian)” or alternatively “Make in India (with FDI)” categories of acquisition over “Buy (Global) – Imports”.

Capital deficiency remains a characteristic feature of developing countries. As the Indian companies lack adequate capital base and capabilities in terms of technology, 100% FDI and resultant capital formation for development of defence capability in India need not be overemphasised. Here comes the role of International investment, which apart from being sizable in quantity can bring about qualitative positives like the associated advantages of technology transfer, and new possibilities for promotion of exports.

ASSOCHAM President Sunil Kanoria has opined that the relaxed FDI norms “will also help in bringing investment and advanced technology into the defence sector thereby leading to inflow of capital and setting up entities of original equipment manufacturers (OEMs) and their suppliers through transfer of technology. Increasing the FDI limit will also facilitate better compliance of offset obligations.”

India is probably the only large democracy without a robust military-industrial complex while it accounted for 15% of the volume of global arms imports in the last five years. Achieving self-reliance and reducing dependence on imports from foreign countries in defence is a necessity today rather than a choice, both for strategic and economic reasons. A 100% FDI in defence may create a win-win situation for the country’s defence forces, local industries and international equipment manufacturers. FDI inflows can have significant positive impact on an investment-starved economy like India. FDI can provide the requisite financial capital while ensuring a stable source of financing the current account deficit from a real-economy perspective.

This push is important for three reasons: a) the regional security environment around the country remains perilous; b) India is in the midst of an ambitious military modernisation programme; and c) the Modi government has sought to undergird India’s expanded international profile on economic diplomacy of which ‘business of defence’ is a critical part. Given its heavy reliance on imports for critical military hardware, it will certainly take some time for India to shed its position of being one of the world’s largest arms importers, but the political willingness to reduce import dependence by creating a domestic defence industrial base is necessary.

As we know there’s no such thing as a free lunch. 100 % FDI has both pros and cons. Let us evaluate the advantages and disadvantages.

Advantages of 100% FDI in Defence

Considering that India imports most of its equipment and weapon systems, there will be a huge savings to the State exchequer as the cost of manufacturing in India will be lower. The best source for large influx of funds, needed urgently for the growth can be the International Investment Funds.

Greenfield FDI inflows can buttress investments by enabling higher productivity and competitiveness. It shall ensure availability of cutting edge technologies for the defence forces, while serving as a catalyst to boost local manufacturing in India. The move will also enhance overall R&D to develop and deploy solutions catering specifically to the country’s security needs like typical weather conditions, terrain and ergonomics.

Greater FDI inflow in defense sector shall lead to more employment opportunities for the local population and boost growth prospects through job creation. Defence manufacturing in India should be able to create couple of million jobs, which in turn will boost up the country’s GDP.

Universally, FDI is looked upon as a way to internationalize and have global presence for many industries and companies. This also provides an excellent tool to the government to check the local production and also trade to be carried on freely without any barriers. The new FDI policy may encourage many foreign companies to set up base in India since they would benefit from the ‘buy Indian’ category in the DPP and enable the country to make substantial savings on foreign exchange.

The new FDI policy, has the potential to create a simplified production environment like better bargaining leverage for government, lesser cost of purchases, reduced influence of international trading factors like fluctuating rate of dollar and above all, lesser hassles of the Rosonborough syndrome (costlier and fluctuating supply of spare parts)

The after sale service of the equipment will be better. Presently, there are many categories of equipment which are lying off road for want of spares and technical support.

Disadvantages of 100% FDI in Defence

Small industries, most of which are suppliers to larger firms, constitute an overwhelming majority of India’s industrial base. A policy that hampers upgradation of their technology skills and goes against their interest may therefore be detrimental to the ‘Make in India’ agenda.

It is reasonable to say that DRDO has not delivered much in the last 60 odd years. However, instead of overhauling and making it productive, 100% FDI in defence may make DRDO irretrievably defunct. In other words, indigenous R&D will get a beating and we will remain heavily dependent on foreign technologies.

Domestic SME manufacturing units may be at a risk of being marginalised. With enhanced foreign fund flow, indigenous manufacturers will face unequal competition. Relaxation of local sourcing norms for state-of-the-art technology based companies may subdue opportunities for suppliers in SME sector.

Further, it will be very unfair if 100% FDI in defence is implemented without giving fair chance to the Indian SME sector. We should incentivise the defence manufacturing for the Indian SME sector, as they cannot really compete with the foreign companies. It has been proven by Indian SMEs that given a chance and encouragement, they can deliver similar technology much cheaper.

With SMEs contributing nearly 20% of the indigenous content for defence equipment, it is imperative for the Government to ensure that large number of indigenous SME industries participate in order to enable granular growth.

Waiver of the minimum local sourcing condition may hurt the opportunities for building higher-end capabilities among Indian industries and entrepreneurs. Rather than allowing foreign companies to bypass domestic suppliers while doing business in India, they must be asked to integrate domestic manufacturers and service providers within their supply chains so that they contribute directly to building India’s economy as well as technological competence. Achieving higher value and creating capability through technology and innovation of the SME sector must be as important a goal for India’s economy as universal employment generation.

The Intellectual Property Rights of the designs developed through FDI by the joint ventures must be retained within the country. India can ensure that companies deliver what they have promised as many a times; there is a mismatch between what is promised and what is delivered.

The Modi government’s flagship campaign, ‘Make in India’ is designed to showcase a number of sectors including defence manufacturing as one of India’s strengths. The ‘Make in India’ policy for the defence sector therefore, needs to aim to reverse the current imbalance between the import of defence equipment and indigenous manufacture without adversely affecting the requirements, capability and preparedness of the armed forces.

While inviting 100% FDI investments is sure to boost the sector, the anxiety that domestic endeavours and enterprise may die out and foreign technology may fully replace Indian systems needs to be reasonably addressed.