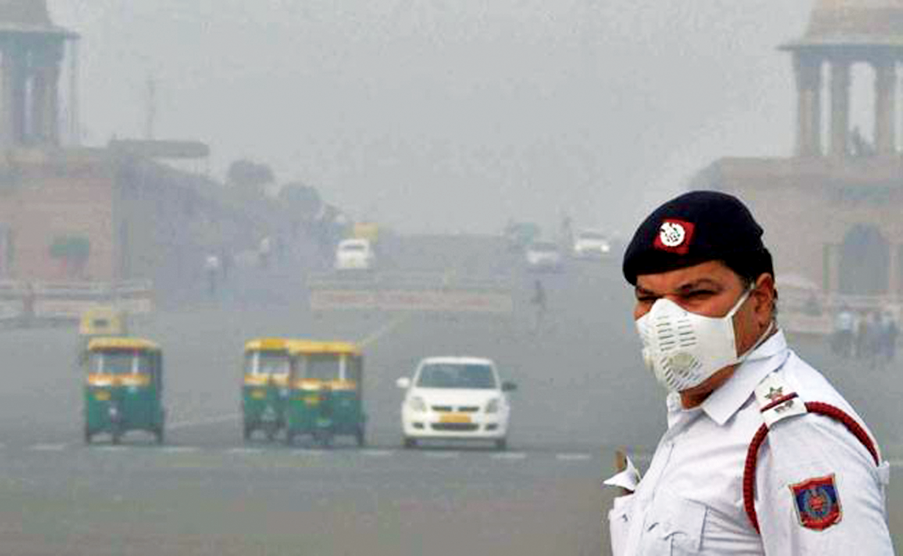 It is expected that the pollution level in New Delhi, the national capital, would be under control. However, the statistics are alarming. Recent data indicate that the number of vehicles in New Delhi has increased by 65% since 2003. Such an alarming increase in the number of vehicles has raised the city’s pollution level. Another reason for Delhi’s alarming level of air pollution is that it is a landlocked city. There is no coastal breeze to blow away the pollutants. The haze that has become a common feature of Delhi is a result of this peculiar locational disadvantage. Environmentalists suggest that the government must focus on decreasing the number of vehicles by improving the public transportation system. The air of Delhi needs to be tamed and it needs to be done at the earliest. The government through the Environmental Pollution (Prevention and Control) Authority (EPCA) is making sincere efforts to improve the environment.  However, there are several factors which need to be looked for improving the pollution levels.

Sucking of dust ― The Delhi Municipal Corporation, the Government of Delhi and the municipal corporations of Ghaziabad, Gurgaon, Faridabad and other important towns of NCR should be directed to use vacuum pumps fitted vehicles to suck road dust. This dust is the main source of air pollution and amounts to around 38% of the total polluting agents. The dust can be disposed of in water. The government should also import dust sucking machines urgently and provide the same to the municipal bodies.

Sprinkling of the water  ―  Sprinkling of water on roads should be made compulsory for the municipal corporations in NCR. Additionally, the governments of Delhi, Uttar Pradesh and Haryana should also involve themselves in this activity. This can control the spread of dust particles. This should be made a normal practice. Some of the corporations already have water tankers and they can be used for this purpose. Additionally, fire service vehicles can also be used.

Checking of overloaded trucks which enter NCR ―  There should be strict checking on overloaded diesel trucks and tractors entering the NCR. Strict checking by mobile magistrates should be enforced immediately and this this will reduce at least 20% of emission. To depend only on traffic police for control will be disastrous. The entry of vehicles from other states is also a matter of concern and needs to be looked into.

Unauthorised industries ―  There are many unauthorised and unregistered industries operating in residential areas within the NCR. There is no check on such industries. Such industries must be controlled as they are a serious cause of air pollution. Registration of such units needs to be initiated.

Non-compliance ― The main problem associated with air pollution also entails the lethargy and the failure of the enforcing system. Various measures suggested and directions issued by the NGT and EPCA are not sincerely implemented. Implementation of such guidelines is of foremost importance.

Industries ― Industries contribute around 11% of the total pollution levels. But by closing industries on the pretext of emission, the government is hampering development of the country. The government should work on compliance and also try to ensure the survival of industries.

Natural Gas as an alternative ― The only alternative to coal or coke is natural gas. Many industries use low quality coal that causes more pollution. They avoid imported coal as it will incur substantial additional expenses. Natural gas can be a viable alternative. The government must support the industrial units that are aiming to convert to natural gas. Even after con-version to gas, there is no guarantee that natural gas will be continuously supplied. Additionally, the cost of natural gas is much higher as compared to coal. It can only be a feasible alternative if it is supplied at a subsidised rate. To save the Taj Mahal, natural gas was supplied to industries in Agra and Firo-zabad at subsidized rates and this had helped in improving the environment. The same model needs to be replicated in Delhi.

Compliance of EPCA directions and NGT orders should be monitored regularly.

No polluting industries should be encouraged within the NCR.

All existing units in the NCR should be converted to CNG and government should facilitate this conversion.

— The author is the Executive Director of the Chamber of Indian Trade & Industry.

[The views expressed by the author in this article is his own.]