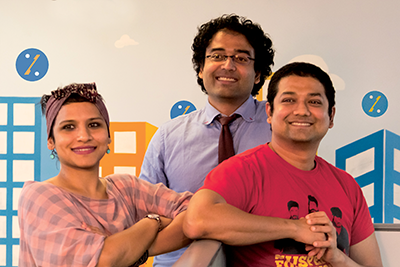 Way back in 2008, when Arjun Shetty and his wife Rati, both working in Seattle, USA, were exploring various options which included re-locating to India, they started looking for financing avenues for setting up their home in Chennai. “We found the system to be laborious. We had to go from pillar to post to get things done and for the simplest of procedures, the paperwork involved was voluminous. This set us thinking. Was it so difficult for the common man to get a housing loan or for that matter, any financial aid to help him achieve his dreams? Maybe that period was the kick-off point when Rati and I said to ourselves that there is an opportunity in this realm to start something which will make life less hard for the common man,” recalls Arjun, who was then working for Amazon. Rati was with Kraft Foods.

Arjun conferred with his brother Adhil who was also in the US with Deloitte; Adhil decided to come over and start the groundwork for a possible venture. The seed was sown and BankBazaar.com germinated on a fertile soil devoid of other effective online facilities in the sphere of banking, insurance, and investment options. Teaming up with them right at the inception stage and continues to be an integral part of the core management team is Iype Isac, formerly with Microsoft, a classmate of Adhil.

Rati says, “At the time of our forming the company, such an online facility was quite unheard of, especially in the realm of seeking for loans, shopping for insurance policies or checking out investment options in products like Mutual Funds. The brick and mortar options through agents and dealers as well as physically going to the institutions and filling out reams of forms, were the norms. When we mooted our idea, even the financial institutions were sceptical. Offline methods were ingrained into the psyche of the common man and largely, the agents’ influence led to decision-making.”

Despite apprehensions, resistances and wariness, the trio went about in a determined manner to kickstart what they felt was the need of the future, way back then. “If we had not started the process in 2008, I am sure, we would have either lost out on the first mover advantage or missed the bus. For, couple of years later, either because we had already launched our services or the proliferation of Internet-based activities were rearing their heads, people were becoming more online-savvy,” recalls Arjun.

Convincing the banks, insurance companies and fund managers was challenging. But, when they realised that they were only aiding the increase of business and that they would only part with commissions normally given to their agents, the institutions slowly came around. “But, the largest player in the business, the State Bank of India took some time to come on board. Similarly, the largest insurance company, LIC has still not signed up with us,” says Arjun.

As with any start-up, BankBazaar.com also depended on funding from VCs and other investors. Adhil Shetty, who relocated to Bombay to be in the financial capital of the country, spoke to us:

Q) Since the beginning, what is the kind of funding that has gone in the company?

A) Our first round of funding in 2008 was from our personal network of friends as angel investors and a well-known Chennai-based business house, AVT Infotech. In 2011, Walden International, the California-headquartered VC firm, believed in BankBazaar.com’s seamless banking marketplace technology and invested $ 6 million in series A funding. In 2014, the company raised $ 13 million from Sequoia Capital with the purpose to educate customers and enabling them to make informed decisions about financial products best suited for them. In 2015, we raised $ 60 million in Round C funding which was led by Amazon, with participation from Fidelity Growth Partners, Mousse Partners, and returning investors Sequoia Capital and Walden International.

This year, BankBazaar raised $ 30 million from Experian in a strategic Series D funding, taking the total funding up to $ 110 million.

Q) What has been the company’s biggest challenge since its inception?

A) At BankBazaar, we strongly believe that consumers are ready to let go of offline processes involving multiple meetings and back and forth physical verifications. However, it was not easy convincing the entire ecosystem, which includes partner financial institutions, online publishers and investors, that our vision of paperless, presence-less finance was the future of personal finance. Remember, we were working on this way back in 2008, a time when the personal finance sector were almost completely dependent on offline agents and call centres.

What kept BankBazaar going was our single-minded focus on our long-term vision of completely paperless financial products accessible to everyone at the click of a button. We believed this would democratise access to finance in India. Today, the old world of paper and physical presence is falling away and a new world of transparency on the mobile phone and PaperLess is gaining great momentum.

Q) Technologically, what are the Nextgen features being implemented?

A) BankBazaar is the world’s first multi-brand marketplace– a platform where customers can get approval on unsecured credit products such as credit cards or personal loans within 30 minutes.

The proprietary BankBazaar Paperless Stack is the world’s first multi-brand, paperless e-KYC platform for instant loan approval. The Bankbazaar Paperless Stack eliminates the need for physical document submission for loan approvals through the company’s online platform, and customers can now opt to retrieve and submit their documentation online for authentication and KYC purposes. This infrastructure stack, developed completely in-house, brings down the processing time substantially from as much as one week to one business day.

Q) How do you view competition in similar field?

A) Our technology and services, have made us a preferred partner of both our partners and customers. We saw 33 million visitors in March. In the last one year, we have seen a 115% increase in the number of visitors, and 176% increase in the number of transactions. With a rank of 160, Bankbazaar is the only marketplace in the top 500 Alexa India Ranks. ComScore’s December 2017 data shows BankBazaar to be 500% larger than any other financial marketplace.