Covid-19 and paradox of digitalisation in the context of Indian education
13:26 pm

While Covid-19 has impacted every aspect of quality life, the education sector, particularly the developing countries like India, is bearing its long-run cost most. The stringency index (figure 1) created by the University of Oxford clearly shows that India had not only reached the stringency level of 100 (which is the highest possible value of the index), the country was able to maintain (stringency value of more than 80) for successive months. That prolonged lockdown created immense challenges in the field of education. 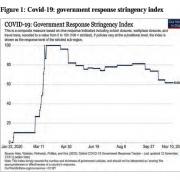 Since the entire country was under lockdown, e-education has been left as the best possibility. University faculties, school teachers set up accounts on online video conferencing platforms to engage with students. The question for a country like India is, therefore, how inclusive is this arrangement? Is it equitable?

In the present pandemic situation, education inequality has not come up due to race, gender, or socioeconomic background. It is about the system which creates a wall and deciding who can access education and who don’t.

The foremost obstacle towards this initiative is access to internet. According to NSSO 2017-18, only 42% of urban and 15% rural households had internet access. The statistic suggests that 2/3 of the children will be left out of the online education process.

Even if private universities/schools cope with the situation, the public schools/universities (where education is treated as a public good and hence provides subsidised education to a greater extent of the society irrespective of affordability or income level) are passing through a tough time. At different levels of education, the distribution of students attending Government institutions and private institutions in India can quantify the problem to a greater extent.

Table 1 shows that more than 60% of students attending government institutions for education in rural areas up to higher secondary levels. The figure is as high as 75.8% for the upper primary. The majority of these students may not have the privilege of having a smartphone with an internet connection, which is a prerequisite for e-learning. In urban areas, the scenario is quite different. More than 60% of students in urban, can afford private institutions across all education levels. 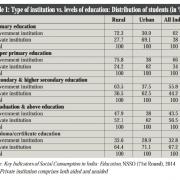 The survey also shows only 13.7% of Indian households possess computers, out of which rural households are 6.2% and 29.2% for urban. In this survey, ‘computer’ includes not only desktop or laptop but also smartphones, notepad, and palmtop. Concerning access to the internet, on average, 26.7% of households have internet facilities. While near 49% of urban households are connected to the internet, the percentage is as low as 16% for rural areas. Therefore, deprivation of the basic right to education for marginalised students (both from rural and urban) is evident.

To promote digital learning, the Ministry of Human Resource Development (MHRD), Government of India, has taken a list of initiatives. Some of these engaging platforms include DIKSHA Portal, ePathshala, SWAYAM Online Courses, e-PG Pathshala, Shodhganga, Vidwan, etc. All these efforts give a solid thrust to the Digital India campaign, no doubt. However, the primary requisite for all these facilities is a sound infrastructure, which India lacks to a greater extent.

So, the present arrangement of e-learning a highly exclusionary. Children from the marginalised sections, rural areas, urban poor, and low-income families are deprived to a greater extent.

The impact is not only short run, but the long-run cost is too high. The male child, who earlier was a school-going, due to this pandemic and inaccessible e-education, may join jobs, mostly in the informal sectors. Hence, if a survey is conducted at present, the drop-out scenario will be visible.

For girls, who are already in a vulnerable situation, their involvement in domestic activities is likely to increase. The human capital formation has halted. The silent exclusion of children belonging to the families in distress is supposed to increase child labour and child marriage.

The recent Union Budget 2021-22 has decreased the budgetary allocation for the Ministry of Education by 6.13%, compared with the percentage in 2020-21. Along with, the announcement of “removal of a few custom duty exemptions on importing parts of mobile chargers and sub-parts of mobile phones” is the final nail in the coffin.

The steps are likely to increase smartphone prices in India. While there was no specific direction to create jobs and increase middle- and lower-income families’ purchasing capacity, access to a smartphone for the learning process will remain unattainable.

On one side, India is heading towards the digitalised economy, but the cost is too high. They are hence creating a paradoxical situation. More emphasis needs to be vested on infrastructure creation-both in terms of Internet connectivity and required devices to make e-learning more inclusive.