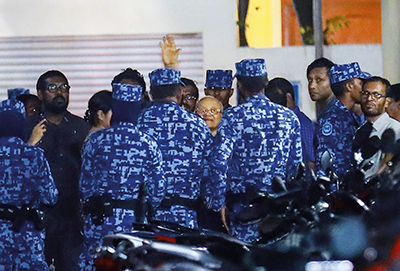 What happened in Maldives?

The latest political crisis in Maldives is a result of a deadlock between President Abdulla Yameen and the Supreme Court of Maldives. The Supreme Court of Maldives has unanimously ruled that nine opponents of Yameen’s regime have been unfairly convicted. Those opponents include exiled former President Mohamed Nasheed. He was sentenced to 13 years of imprisonment in 2015, after a trial which is broadly viewed as being politically motivated. Nasheed was subsequently allowed to move into self-exile and is now in Sri Lanka. Apart from Nasheed, the former Maldivian Defence Minister Mohamed Nazim has also been imprisoned.  Many Maldivians believe that he was framed.

Opposition protests gathered pace as President Yameen refused to obey the Maldivian Supreme Court’s order to free the remaining jailed dissidents. As the opposition intensified their protests, Yameen detained Chief Justice Abdulla Saeed along with another Supreme Court judge Ali Hameed.  Justice Saeed and his jailed compatriot had been instrumental in the above mentioned sentence, which was warmly received by Nasheed and his Maldivian Democratic Party (MDP). Nasheed is Yameen’s half-brother but now allied with the opposition. In late January, he had urged the public to overthrow the Yameen government.

The Maldivian Supreme Court’s ruling possibly precedes a fiercely contested presidential election which is to be organised later this year. Nasheed, who was granted asylum in the UK in 2016 and later moved to Sri Lanka, told reporters last year that he planned to return home and run for the presidential elections. The judgement has gone in his favour.

There might be other reasons for President Yameen’s crackdown. According to the Times, recent investment deals struck with China and Saudi Arabia might have strengthened his confidence. But the emerging crisis in Maldives can impact its tourism industry which is its main foreign exchange earner. Tourism took a hit in 2015 when concerns over terrorism provoked Yameen to declare a state of emergency. This time around China, the US, the UK, and India have already issued travel warnings to their citizens.

India’s relations with Maldives have been frayed for some time. The problem started specifically after the first democratically elected President, Nasheed was deposed by force. Since then, Maldives has cosied up to China at the expense of India. Yameen has enthusiastically taken to the the Maritime Silk Road initiative launched by China in 2013. During Yameen’s tenure, Maldives has leased out several islands to China which could be used for building military bases as part of the “string of pearls” strategy to encircle India.

The latest development in this narrative was the signing of a Free Trade Agreement (FTA) with China. Some suggestions have been made in India regarding repeating “Operation Cactus’’, which had restored President Gayoom to office in 1988, when he was exposed to a coup organised by some disgruntled Maldivians with the support of armed Sri Lankan mercenary invaders. Under the current circumstances, such action is not possible as the situation is different. At that time, the lawful Maldivian President had sought India’s help.

According to Ashok Sajjanhar, President, Institute of Global Studies and a former diplomat, “The strategic significance of Maldives for India has been growing over the last few years. In addition to the growing influence of China in the country, Maldives has been getting increasingly radicalised and coming under the influence of fundamentalist Wahhabi ideology. Islamic State (IS) and Lashkar-e-Taiba are also reported to have established bases in the country. Several hundred young men and women have deserted their homes to fight for the IS in Syria and Iraq. The rapid growth of radical Islam in India’s vicinity is a matter of serious concern for India and for regional security.”

India will need to employ a graduated approach in dealing with the evolving situation. It will also need to be in regular and constant touch with its international partners including the US, EU and other likeminded countries. Yameen appears to have adopted an aggressive attitude, as he feels emboldened by China’s support. India must try to intervene for preserving its own interests in the region.