The deadliest chemical attack in Syria
00:00 am 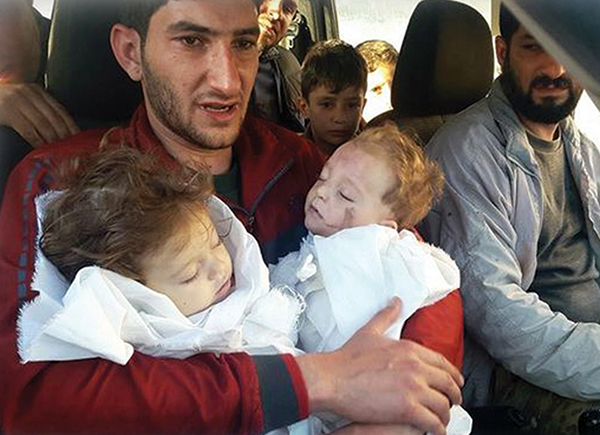 when international commentators were hoping that the crisis in Syria will come to an end, the country faced a new catastrophe. On April 4, a suspected chemical attack on the rebel-held town of Khan Shaykhun in Syria’s Idlib province killed at least 100 people.

According to the Syrian American Medical Society (SAMS) that runs several field hospitals in the area, more than 550 people were injured. SAMS doctors informed that the attack caused people to vomit and foam the mouth. Many lost consciousness and incurred muscle spasms. Other symptoms included constricted pupils and slow heart rates and were indicative of an organo-phosphorus compounds agent, a category of toxic gases, which includes sarin. The Syrian government has made the life of its people miserable in every possible way. When the country’s President Bashar al-Assad is gassing his own population, then this act is known as state terrorism. President Bashar al-Assad probably controls about 1,000 tonnes of chemical weapons, stashed in 50 facilities. A former Pentagon official called the country a chemical weapons “superpower.”

Who is to be blamed?

The attack has drawn global attention and severe criticism. The White House called the attack a “reprehensible” act against innocent people “that cannot be ignored by the civilized world.” The American, French, and British governments blamed the Syrian President Bashar al-Assad’s regime for the attack. The strike is considered to be one of the deadliest in the history of the ongoing Syrian war. Syria denied that it used chemical weapons and blamed terrorist organisations for the attack. Russia asserted that the deaths resulted from a gas released when a regime airstrike hit a “terrorist” chemical weapons factory on the ground. Western countries criticised Russia for taking a stand in favour of the Syrian regime.

An emergency Security Council meeting was held on April 5, a day after the attack. The US, Britain, and France proposed a Security Council resolution which could be put to the vote. The draft text, seen by Reuters, says Syria’s government must provide an international investigation with flight plans and logs for Tuesday, the names of all helicopter squadron commanders and provide access to air bases from where the attacks using chemicals weapons could have been launched. The UK Foreign Secretary Boris Johnson said, “All the evidence I have seen suggests that it was the Assad regime that did it and in full knowledge of using illegal weapons in a barbaric attack on their own people.”

The locals of Khan Shaykhun said that the attack began early on April 4, when the residents heard planes followed by a series of loud explosions. The symptoms followed. They said they could not identify the planes. Both Syrian and Russian jets have bombed the area before. The Russian government considered to be Syria’s most powerful ally has already made it clear that it would not support the resolution put forward by the United States, the UK, and France.

According to a March 2016 report called “A New Normal: Ongoing Chemical Weapons Attacks in Syria” by SAMS, there have been 161 chemical attacks in the ongoing Syrian war.  These have led to at least 1,491 deaths and 14,581 injuries. Out of the 161 attacks, 77% have occurred after the passage of United Nations Security Council (UNSC) Resolution 2118 in September 2013, which created a framework for the destruction of Syria’s declared chemical weapon stockpiles. In 2015, there were 69 chemical weapons attacks, making the year with the most number of chemical attacks in Syria. At least 58 chlorine attacks or 36% of the total chemical weapons attacks occurred after UNSC Resolution 2209, which condemns chlorine gas as a weapon in Syria.

In August 2016, a year-long joint inquiry by the UN and the Organization for the Prohibition of Chemical Weapons (OPCW) reported that in at least two cases, they had found “sufficient information to determine that the Syrian Armed Forces were responsible for the attack which released toxic substances.”

According to a New York Times report, soon after chemical attack in Khan Shaykhun, Syrian warplanes launched another airstrike on one of the medical clinics where victims of the first attack were being treated. There have been several attacks on medical facilities during the Syrian war. There were 382 such strikes between March 2011, when the Syrian civil war began, and June 2016, according to data collected by an organisation called ‘Physicians for Human Rights’. Almost 90% of those attacks were conducted by Syrian government forces or by the Russian forces fighting on behalf of Assad. These forces have also killed more than 700 medical personnel in Syria, according to the group’s statistics.

On the American President Donald Trump’s orders, US warships launched 59 Tomahawk cruise missiles at a Syrian government airbase where the warplanes that carried out the chemical attacks were based. Trump said, “It is in the vital interest of the national security of the United States to prevent and deter the spread and use of deadly chemical weapons. There can be no dispute that Syria used banned chemical weapons, violated its obligations under the Chemical Weapons Convention and ignored the urging of the UN Security Council. Years of previous attempts at changing Assad’s behaviour have all failed and failed very dramatically.”

The missiles were launched at 8:40 p.m. Eastern Standard Time on April 6 when there was  minimal activity at the base, and targeted aircraft, hardened aircraft shelters, petroleum and logistical storage, ammunition supply bunkers, air defence systems, and “the things that make the airfield operate,” Pentagon spokesman Capt. Jeff Davis told reporters. The missiles were launched from warships in the Eastern Mediterranean.

The attacks could have a ripple effect on US- Russiarelationship. The US Secretary of State Rex Tillerson confirmed that the US military contacted their Russian counter- parts about the attack ahead of time, in
accordance with deconfliction policies between the two countries over military activities in Syria. The Russian officials, in a statement said that the strike will undermine the war on terror and warned that they may halt cooperation with the US forces. According to a United Nations estimate released in 2016, the six year civil war in Syria has claimed the lives of at least 400,000 people. More than five million Syrians have fled the country and more than six million more have been displaced internally.

The Chemical Weapons Convention (CWC) is an arms control treaty which outlaws the production, stockpiling, and the use of chemical weapons and their precursors. After the Ghouta chemical attack, Syria acknowledged possessing chemical weapons in September 2013, and agreed to put them under international supervision. On September 14 2013, Syria deposited its instrument of accession to the CWC with the United Nations as the depositary and agreed to its provisional application pending entry into force
effective from October 14. An accelerated destruction schedule was devised by Russia and the United States on September 14, and was endorsed by United Nations Security Council Resolution 2118 and the OPCW Executive Council
Decision EC-M-33/DEC.1. Their deadline for destruction was the first half of 2014. Syria gave the OPCW an inventory of its chemical weapons arsenal and started its destruction in October 2013, two weeks before its formal entry into force, while applying the convention provisionally.

When it comes to chemical weapons the efforts to prevent proliferation to eliminate existing arsenals are focused on the Chemical Weapons Convention of 1993, which bans not only the use but also the possession and production of these weapons. It was especially important that the Convention covered all states equally that the great powers were to eliminate their stocks just as all others. It was also highly significant that a comprehensive system for inspection, including on-site inspection, was set up. While the adherence to the convention is as yet by no means universal – and this is a concern we can register with satisfaction how huge quantities of chemical weapons are being destroyed under international inspection in Russia, the US as elsewhere.

But the attack in Syria needs to be taken seriously by the International law makers so that strict action can be
taken against those found guilty. It shouldn’t be ignored like Saddam Hussein who after repeated attack on Iranian forces with sarin killed more than 20,000. Hussein also attacked the Kurdish minorities and killed 5000 civilians. These actions went unnoticed as Hussein was then a US ally.