DEFINING SPORTS BEYOND CRICKET
00:00 am 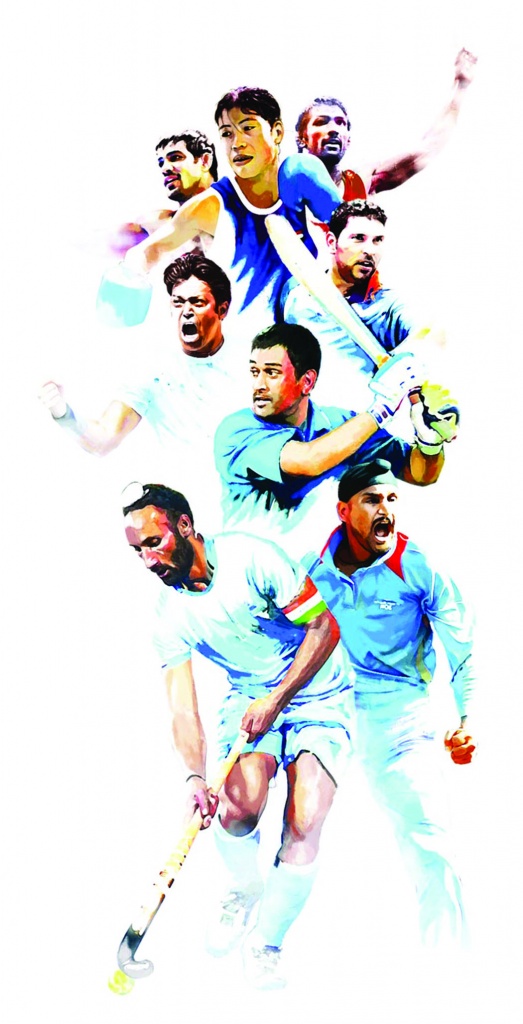 Wankhede stadium, Mumbai, April, 2011: Second ball of the forty-ninth over. M.S. Dhoni hits the ball for a huge six. 42,000 Indians present in the stadium and millions watching it on television, roar. India lifts the World Cup.

This is the story of India. Athletics do not feature in our daily discourses, in our informal discussions. But when there is a sporting extravaganza like the Olympics or the Commonwealth Games, we expect our sportspersons to bring us medals. The daily struggle of an Indian athlete or a gymnast eludes us as we follow them in the glittering stage of th Olympics or such events but not when they are deprived of basic practice facilities at home.

We hardly know their story. It took us a Priyanka Chopra-starring film to lay bare the struggle behind boxer Mary Kom’s success. The glorious stories of Sakshi or Dipa or Sindhu may become tales for future generations to cherish. Why should every Indian child aspire to become another Sourav Ganguly or Sachin Tendulkar?

Mindsets need to change for India to shine in other sports. Why should sponsorship be integrally related to the popularity of any sport? Why shouldn’t the sheer effort put in by an athlete be enough to win her appreciation and recognition?

The government needs to see sports in India as a composite entity of excellence and not reduce it to just cricket. Cricket is commercialized. Cricket has stars and stardom. It has the capability to ensure profits. Does that undermine the effort and dedication with which other Indian sportspersons pursue their sport of choice?

Cricket’s emergence as a prime entertainment component of Indian television is a relatively new phenomenon. This has been enabled by the flexibility shown by the cricket organizers in India. The game has been attractively packaged to combine entertainment with sports. It is now being telecasted even by non-sports, non-news entertainment channels.

The transformation of cricket has been initiated by broadcasters who have  intervened at the right time with clever strategies to continue the interest in this sport. Cricket spectatorship has continuously widened and more women have increasingly taken to the sport. Government authorities have continuously encouraged the game and it is well attended by the media who promote the game and analyze it in detail. The media seems uncannily silent when it comes to raising issues about poor infrastructure prevailing in almost all other sports in the country.

The record for an Indian athlete in 100 metres was set at 10.3 seconds, attained in 2005. That timing was achieved by the Canadian Percy Williams in 1930.

There is a popular belief in India that our climate is not favourable for sports. Fallacious and blanket statements are made about our athletes lacking mental grit, physical strength and sometimes, even talent to compete with their counterparts from other countries. So, after denying our athletes proper training, provisions, and infrastructure, the only thing we offer is destructive criticism. Add to this the rampant corruption in sports bodies peopled by those indifferent to the plight of our athletes.

O.P. Jaisha who finished the women’s marathon in this Olympics and had fainted thereafter reportedly told the media, “It was very hot there. I ran in scorching heat. There was no water for us, neither recovery drinks nor food. Only once in 8 km did we get water (from Rio organisers) which did not help at all. All the countries had their stalls at every 2 km but our country’s stall was empty.”

However, the Athletics Federation of India (AFI) refuted the claim. If the claim of the sportswoman is true, which is really hard to doubt, do we even deserve to send a contingent to Olympics? What sort of mindset do we reflect when such claims are made? Many athletes do not speak up due to fear of being targeted by the sports federation and being victimized. One hopes Jaisha is spared this as the power rests with sports bodies helmed by people having political clout, not sportspersons having merit.

Each and every sport is being given importance in developed countries.  Infrastructure and satisfactory training facilities are provided and are supported by sharp financial planning. But in India do we treat our sports equally?

Few of us are familiar with the names of the Indian hockey team. They are not as highlighted as the cricket players.  We do not know how they practise or how well tended they are? When they fail, the media criticizes them and creates public opinion against the players and the game. The nation compares them with the cricketing stars (an unjust comparison) and concludes that the sport has no future in India.

Badminton is now a popular sport in India and probably the second most played sport in India. India has achieved global recognition in the past with the help of star players like Prakash Padukone, Madhumita Bist, and Pullela Gopichand. Both Prakash Padukone and Pullela Gopichand won the All England Championship in the year 1980 and 2001, respectively. But has badminton received the share of governmental attention that has been given to cricket?

The remarkable feat of P.V. Sindhu has also exposed the story of Gopichand’s struggle to start a badminton academy. The Government of Andhra Pradesh awarded him five acres of land in 2003 in Hyderabad at a nominal rate for 45 years. He managed to get sponsorship from Yonex and sought good foreign coaches for his academy. He managed to raise $10,00,000 for training 60 players per year. The academy still needs funding to run at an optimum level with more coaches, and the target amount is $30,00,000 a year. Despite his efforts, reaching that target remains a far cry.

Such initiatives cannot be expected to come only from former players. The government needs to step in and replicate such initiatives across the country to promote various sports.

Players who have given everything for their sports need to be respected by the authorities and provided for. There are numerous tales of promising sportspersons abandoning their sporting careers to pursue other professions for financial security. Unpleasant tales of former sportspersons wanting to sell their medals to sustain themselves should shame us. Authorities must understand that a sportsperson needs to be nurtured. Past their prime, sports persons are often left to fend for themselves. Even if they are provided employment, there is no effort to use their expertise for the benefit of that sport.

The importance of ground level competition cannot be denied in promoting a sport. Under Rajiv Gandhi Khel Abhiyan scheme, annual sports competitions were conducted in 29 states/UTs in the year 2014-15 and a sum of  `83.84 crore was released for holding such competitions.  A total number of 29.08 lakh athletes participated at various levels.

National Sports Talent Search Scheme is used to find sporting talent among students in the age group of 8–12 years without any anatomical infirmities and involves nurturing them.

Target Olympic Podium scheme was set up under NSDF to identify and support medal prospects for Olympic 2016 and 2020. The focused disciplines were athletics, archery, badminton, boxing, wrestling, weightlifting, and shooting. The selected athletes were provided with financial assistance for their training.

The Ministry of Youth Affairs and Sports has decided to consider granting recognition to sports federations of certain indigenous sports disciplines as Regional Sports Federations (RSFs). The government has intimated that such RSFs which want to be recognised must hold competitions of various levels of their concerned sport. Such policies need to be multiplied and increased.

In spite of this, at the local level, sports is not viewed as a viable profession. Right from the local level, families, schools, and local sports organisations have to be cooped to promote sports culture where merit is nurtured and rewarded. But what one finds instead is politicization of sports, rampant corruption and nepotism. But if sports become important events in villages, towns, and cities, which ensures public participation and enthusiasm, then investors and advertisers will enter the scene and the sector will grow. Local sporting talents will thus get the opportunities for growth and development.

Coach for the Indian athletics teams, Dr. Nikolai Snesarev has sent his resignation to the Athletics Federation of India (AFI). He has cited poor infrastructure and lack of facilities as the reason for his premature departure. According to Sensarev, “How long do you expect me to get results with this kind of infrastructure? I will not work with these existent facilities, I wrote to them 5-6 days back. I will be ending my association with them by the end of this month.” He also added, “The problem lies in how the athletics is being run in the country, it is not the dearth of talent.”

According to Abhinav Bindra, the only gold medal winner from India in any individual event said, “Each medal costs the £5.5 million. That’s the sort of investment needed. Let’s not expect much until we put systems in place at home.”

While talking to BE, national level shooter Soumojit Chakraborty said, “It cannot be said that there is no infrastructure at all but yes there is a lack of maintainence.  We really have good things but the problem lies in sustaining good things.” He added, “Keeping Olympic results of this year in mind the main problem with the Indian athletes is the excessive expectation they have to answer to. The whole country starts worshiping them before the game but the moment they miss medals they are surrounded by criticism.”

Our performance in the Olympics has little to do with genetics or nutrition or body structure or muscle fibre. We will be a country of winners only when we invest in sports- emotionally, financially, and through our actions. The administration needs to invest without expecting immediate results. This is a long-term process. Even the players need to focus on their game and not be satisfied with the perks and employment associated with representing the country in premier events.