Demonetisation : The Myth and the Reality
13:01 pm 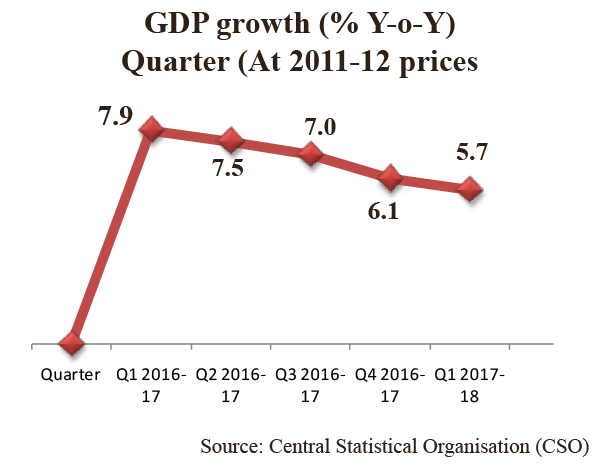 Opposition political parties and economists across the world blamed last year’s demonetisation and the uncertainties before the introduction of Goods and Services Tax (GST) as the two immediate reasons for the deceleration of economic growth.

The de-stocking of goods in the run-up to the July 1 launch of the GST and the underlying uncertainties during this period hit industrial production. As a result, the industrial growth has ‘bottomed out’. Index of industrial production declined 0.2% in June 2017 compared to an increase of 8% in the same month a year ago. During the first three months of the current year, between April and June, industrial output has grown 2% against 7.1% in the corresponding period of the previous year. Manufacturing sector was hit harder with a decline of 0.4% in June.

How much of this deceleration in GDP growth was due to demonetisation and how much due to the GST is anybody’s guess. But almost everyone feels that these twin demons have halted India’s economic growth. The union finance minister, Arun Jaitley, has admitted the slowdown and has said that the GDP growth rate at 5.7% is a “matter of concern”. He has agreed that demonetisation was one of the reasons for this slowdown. However, this is a temporary phenomenon and the economy will bounce back in the long run, he argued. But then it has generally been agreed that the impact of demonetisation will be neutralised in the long run.

But the question is: Was the slowdown in GDP growth caused by demonetisation? If the GDP figures are scratched a little deeper one finds that the economy in fact, had begun slowing down much before demonetisation came into effect. The GDP growth had fallen from 7.9% in the first quarter of 2016-17 to 7.5% in the second quarter and further to 7% in the third quarter. Admitted, that the decline was sharper in the post-demonetisation period, but the process of slowing down had already begun.

The primary constituents of this fall in GDP growth rate in the first quarter of the current year were manufacturing and the financial sector including insurance and real estate. The growth rate of gross value added (GVA) of the manufacturing sector declined to 1.2% during April-June 2017 from 10.7% in the same period in the previous year. Manufacturing’s share in India’s total GVA declined from 18.4% in the first quarter of 2016-17 to 17.7% now.

A fall in manufacturing GVA’s growth from 10.7% to 1.2% had serious impact on the total GVA or the GDP growth but was it due to demonetisation alone? The answer is: No. Like GDP? the decline in the growth of manufacturing GVA too had begun much before the demonetisation came into effect in November 2016. The growth rate of manufacturing GVA had fallen by three percentage points to 7.7% in the second quarter of last year from 10.7% in the first quarter. This decline was largely caused by demand constraints. This was reflected in the falling inflation rate, which, economists argue, was primarily the result of a falling demand. And a part of this demand squeeze was caused by lack of cash in the system.

In fact, as details come in, it is increasingly argued by economists that uncertainties over the GST had affected the first quarter GDP figure more than demonetisation. The Nikkei India Manufacturing Purchasing Managers Index (PMI) data indicate that the uncertainties over the introduction of GST weighed heavily on the manufacturing industry. Weak demand from clients at companies and concerns related to GST, slowed India’s manufacturing activity to a four-month low in June.

PMI dropped to 50.9 in June from 51.6 in the previous month, as a softer rise in new orders resulted in weaker growth in production. The downturn was widespread across the three broad areas of manufacturing with intermediate goods producers the worst affected.

At 47.9 in July, down from 50.9* in June, the PMI was at its lowest since February 2009 and highlighted the first deterioration in business conditions in 2017 so far. This would mean that the manufacturing sector may not see a better result in the second quarter too.

As for agriculture, the sector that is supposed to have suffered most because of its dependence on cash transactions, the end result seems to be indifferent to demonetisation impact. In an interview to a national newspaper, the former RBI governor, Raghuram Rajan, said “that if you are taking 87% of the currency out of circulation, there will be a tremendous impact on the areas that use cash”. Rural India, the small and medium farmers particularly, experienced tremendous hardship when the government withdrew the high currency notes from the system last November. Agricultural activities suffered due to non-availability of enough cash. The growth of agriculture GVA was down from 5.2% in the last quarter of 2016-17 to 2.5% in the first quarter of the current year. However, when compared with the corresponding quarter of the previous year the sector does not seem to have lost much.

That is, whether it is GDP, manufacturing or agriculture, demonetisation had hastened the decelerating growth trend further as they were experiencing a slowing down before scrapping of the high value notes last November. As such, it appears that the impact of uncertainties before the implementation of GST probably has caused bigger damage to growth figures.

And this brings one back to the basic question: How has demonetisation benefited the economy? Has it succeeded in identifying black money?

The other potential benefit thought of demonetisation was that electronic transaction would go up. And what has been the result? In Rajan’s words “… if you look at electronics transactions, you see that there was a blip-up when demonetisation happened but it has come back to broadly the trend growth line”.

That is, demonetisation has hastened the deceleration in growth parameters but has failed to make any headway to its stated objectives of either identifying black money or dramatically expanding digital transactions.