Does Kerala lead the way in offering social security to migrant labourers?
13:52 pm

The present LDF government of Kerala is proactive about providing social securities to its migrant labourers. As many as 15 lakh migrant workers, mainly from Odisha, Bengal and Assam, work in the state. The estimate of workers made by the Gulati Institute of Finance and Taxation, Trivandrum, is much higher, close to 25 lakh. The difference in number is due to the difference in the definition of migrant labourer and the method of calculation. But it is also true that the number varies with time. In 2013, the number of migrant labourers in Kerala was the highest there has been a special role of migrant labour in Kerala as it has been famous for out migration of workers to different countries of West Asia for the last 30 years or more. At the same time, it is a receiver of huge migrant labour force from different states of India. The other state is Punjab from where a large number of people have migrated to countries like Australia, Canada, the UK and the US.

Emigration is not a new phenomenon in India. Emigration of Indians is centuries-old. The origin of present day out-migration goes back to the colonial period, with the dispatch of indentured labourers from India to the British colonies in 1824, under a government-controlled system. The British did this with a view to replacing black slave labour with indentured labourers from India, after the abolition of slavery.

At present, it is worring that there has been little social protection of the migrant labourers in India. The biggest receiver of migrant labour force is the construction sector. This has been more intensive in the period of globalisation after 1990 where all the metropolitan cities and other urban areas attracted millions of unskilled and semi-skilled migrant labourers for their expansion and development. But there has been almost no systematic social protection for them in any state. In India, there have been special legal provisions for migrant labourers from 1974. The states have not implemented these seriously. As a result, a lot of workers have to suffer huge financial and other losses in migrating states. 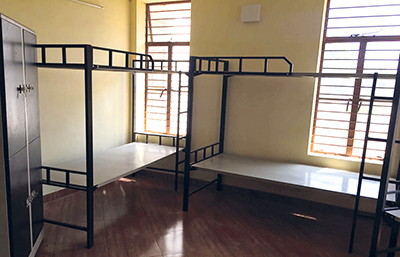 Housing and health facilities of migrant workers are unique in Kerala

After a long period of time Kerala has been the pioneer in providing decent accommodation to its workers including guest workers, that is, migrant workers. The government has brought in a housing scheme, APNA GHAR, exclusively for migrant workers. The scheme was first initiated about four years ago but the present government has added flesh and blood to it. The first project has been completed in Palakkad district. As many as 640 workers can reside here. There is a demand for housing for migrant labour. Even many employers are interested in such projects. Government is going to advertise providing accommodation. What will be the method of distribution of such housing schemes? M. K. Rama Krishnan, District Labour Officer, Palakkad, told this reporter that the matter was yet to be decided. But they must be careful to distribute them in such a way that as many employers get the benefit of this. He also told that accommodation was also available on individual first come first serve basis. How many workers would benefit from it if more and more accommodation centres are built in different places of the state? Rama Krishna said, “This is our first project. Many will be built in different parts of the state in the coming few years depending on several factors like demand for residence, availability of suitable land etc.”

Cost of accommodation is not at all high. It is Rs800 per month for one worker. There are a number of kitchens on every floor that may be distributed among groups of persons with similar food habits. A very specious area on each floor is dedicated for toiletry, bathing and washing of clothes. It is known that the Palakkad project costs Rs10 crore. This has been a totally government funded project, as part of its social welfare scheme. The cost of accommodation has not been set as a cost plus formula as recurring cost, said a government official, will be very high.

India’s first health welfare scheme, AAWAS, for migrant labourers has been a welcome mmstep. A Kerala government booklet on the state’s welfare model mentions that the scheme has drawn the attention of some of the international media and they have praised it. The AAWAS scheme provides complete Health Insurance coverage to the migrant workers for Rs15,000 a year and accident death insurance for Rs2 lakh.

Under the AAWAS scheme, the state government has allocated Rs10 crore and another Rs10 crore will be allocated next year. Many centres are being set up at different places of the state for registering under this scheme. The registration centre will provide a special identity card to each of the workers for the purpose of verification of individual identity.

Economics of out-migration and in-migration of Kerala

Kerala is famous for remittances of money. About 2 million semi-skilled and skilled Keralites are working in foreign countries, mainly, in West Asia. A similar number of workers, unskilled or semi-skilled, from different states of India also work here. The reporter had talks on this topic with T. M. Thomas Isaac, Finance Minister of the state in  late December 2017. Isaac said that the out-migrant Keralites earn very good salary in foreign countries. At the same time, there is a huge demand for unskilled jobs in the state. These are filled by the workers of the other states. Most Keralite youths do not like to do manual work. But they can do machine-based work. Their aspiration is to go abroad and get a good salary. Thomas also said, “We can afford unskilled workers from outside. They get Rs600 to Rs 800 per day on a regular basis, which they could not get in their home state. They also earn more money by working overtime”.