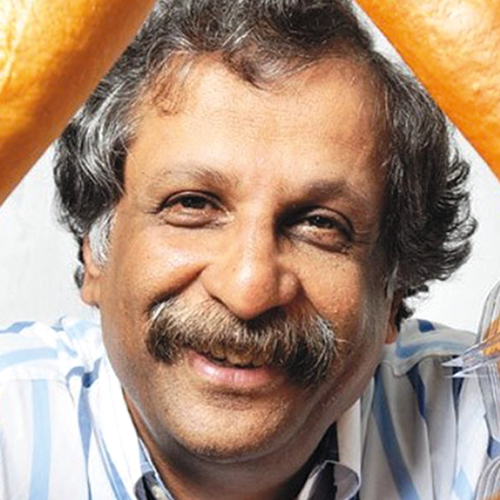 According to a popular adage, ‘to carry coals to Newcastle’ is foolish. But, M. Mahadevan proved that phrase wrong when, way back in the early 1980s, he launched Hot Breads and took the lowly baked bread to a totallydifferent dimension.

But, let’s go back a bit, to the late 1970s when, a night manager in a hotel and a day lecturer in a college discovered his love for food and partnered with a friend to open one of Chennai’s first takeaway Chinese food outlets, and thereby set off a trend. “When we tasted success in this, someone offered me a place in his new commercial building, to start a restaurant. This became one of Chennai’s best fine-dining Chinese restaurants – The Cascade,” says Mahadevan. Thirty years and counting, The Cascade is still considered as one of the best fine dining Chinese restaurants in Chennai.

While this venture became a rage in Chennai, Mahadevan did not rest on his laurels. He wanted to do something path breaking in the food industry. A chef he may not be, nor a restaurateur by lineage or tradition. But, a foodie, he definitely was and more importantly, Mahadevan had a keen sense of business which helped him to identify business opportunitiesin the world of food. At a time when many had not heard of food plazas and food courts, Mahadevan launched his popular PlanetYumm, inviting other popular restaurants and food brands to have individual counters. Simultaneously, he launched a slew of his ownbrands in several food verticals – Wang’s Kitchen and China Town (Chinese), Benjarong (Thai), Hot Breads and French Loaf, Le Chocolatier, Cream Centre, Sera (pub), Ente Keralam (Kerala cuisine), Teppan, and brought in North Indian brands like Marina, Bombay Brasserie, Copper Chimney to offer a wide variety of food experiences to the discerning public.

Not content with what was happening in limited locations within India, Mahadevan set his sights on international markets. Tying up with famousSouth Indian brands like Saravana Bhavan and Anjappar, and taking his own Hot Breads, heset up 42 bakeries and restaurants in the USA,
West Asia, Africa, Canada, France and London. “It was in 1994 that I opened my first international outlet in Dubai, which became my stepping stone for all further expansions outside of India,” says Mahadevan who is an NRI holding a resident Visafor the Emirates.

Mahadevan started with a modest investment of`60000, way back in 1982 and quickly went into a novel method of expansion, establishing his own as well as other franchised brands. Operating under three distinct companies, today he has partnered with 252 business entities across 18 countriesand has a finger in the pie of 476 eateries.  In India, Mahadevan operates 268outlets and internationally he operates 145. His range of restaurants cover the three unique areas catering – Bakery & Café, QSR, Fine Dining and Casual Dining. Additionally, he operates 16 foodcourts. His total turnover of the Indian operations isaround`195 crore, with the international setup being on a partnership basis. Currently, his companies collectively employ over 4000 personnel.

Withall this success, which does not seem to have gone to his head, Mahadevan is a socially responsible person and a charitable one at that. For instance, his bakery operations for Hot Breads especially, trains people in baking and he encourages them to set up their own bakeries.

One such venture is Higginbothams Writer’s Cafe which has many firsts. The non-profit cafe was started by Mahadevan, in collaboration with Higginbothams, as the legendary bookstore re-invents itself. According to him, “All the profits go back to the International Foundation for Crime Prevention  and Victim Care (PCVC) and to support burn victims. We hope that these women will find a way back into meaningful employment. And, we try our bestto do that through our training and state-of-the-art facilities.”