ON GERIATRICS AND GERONTOLOGY
00:00 am 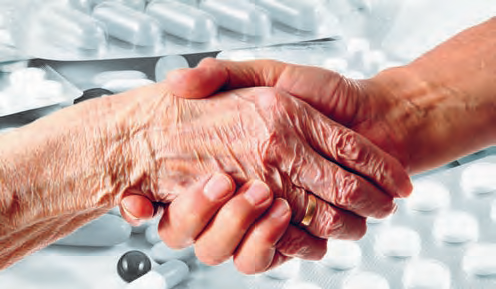 Geriatrics is one of the most exciting and challenging areas in medical science that provides medicinal and supportive treatment, especially to the elderly. Senior citizens in frail health with chronic or degenerative diseases require continuing support because of their illness that prevents them from leading an independent life. Geriatric are is designed to support them.

There is no set age at which patients may be under the care of a Geriatrician or Geriatric Physician. Rather, this decision is determined by the individual patient’s needs, and the availability of a pecialist.Geriatrics differs from Gerontology, which is the study of the aging process itself. Geriatrics is sometimes called Medical Gerontology.

Ayurveda the ancient Indian system of medicine has mentioned about the eight branches of Ayurveda (Ashtanga yurveda), namely, Kayachikitsa (General Medicine), Balaroga (Paediatrics), Graha chikitsa (treatment of diseases related to Psychology), Urdhvanga chikitsa (treatment of the diseases of the Head and neck, ENT), Shalya tantra (Surgery), Damshtra (treatment of poisonous stings and bites), Jara/Rasayana (Geriatrics) and Vajikarana (Andrology). The term ‘Geria’ is very close to the Sanskrit word “Jara”. Rasayana is defined as “Rasayanam cha tat jneyam yat jara vyadhi nashanam” means Rasayana is a branch of medicine which deals with the prevention of premature ageing, management of diseases and especially the management of diseases related to aging.

The Canon of Medicine, written by Avicenna in 1025 AD, was the first book to offer instruction in the care of the aged, foreshadowing modern Gerontology and Geriatrics.

The famous Arabic physician, Algizar (circa 898-980), also wrote a special book on the medicine and health of the elderly. Another Arabic physician in the 9th century, Ishaq ibn Hunayn (died 910 AD), the son of Nestorian Christian scholar Hunayn Ibn Ishaq, wrote a Treatise on Drugs for Forgetfulness.

George Day published the Diseases of Advanced Life in 1849, one of the first publications on the subject of Geriatric Medicine. The first modern Geriatric Hospital was founded in Belgrade, Serbia in 1881 by Doctor Laza Lazarević.

The term Geriatrics was proposed in 1909 by Dr. Ignatz Leo Nascher (1863-1944), born in Vienna, Austria who later mi-grated to New York City, former Chief of Clinic in the Hos-pital Outpatient Department (New York City) and a “Father” of Geriatrics in the United States. Dr. Nascher argued that the disease and medical care of the aged should be consid-ered a separate specialty. His published research included the first U.S. textbook on geriatric medicine. Nascher founded the New York Geriatrics Society in 1915. He was named the American Geriatrics Society’s Honorary President at their first meeting in June 1942.

Initially, Nascher encountered resistance from his colleagues.He had difficulty finding a publisher for his 1914 book, Geriatrics: The Diseases of Old Age and Their Treatment (Philadelphia: P. Blakiston’s Son & Co). Nascher con-cluded, as do most geriatricians today, “Senescence is not due to any one cause”. “Disease is not (always) a causative or even an essential factor.” Nascher observed a fundamental antipathy towards the elderly in society: “The idea of economic worthlessness instills a spirit of irritability if not positive enmity against the helplessness of the aged.”Though geriatrics was first conceived and named in the US, it was in the UK that geriatric medicine was born over 30 years later.One of the first publications on the subject of Geriatric Med-icine was by George Day, whose Diseases of Advanced Life was published in 1849. Day documented some of the mod-ern day “Geriatric Giants”, including incontinence and de-mentia. In 1881 Charcot was the first physician to advocate a specialty of geriatric medicine, based on his observations of a poorhouse-like institution in Paris. French physicians had previously used the phrase “Gerocomie”— a term used to describe the need for a separate facility for elderly people, where they could be adequately cared for and treated. They recognized that segregation of elderly people could help in im-proving their health and wellbeing.

Modern Geriatrics in the United Kingdom really began with the “Mother” of Geriatrics, Dr. Marjorie Warren (1897-1960).

Warren emphasized that rehabilitation was essential to the care of older people. She believed that merely keeping older people fed until they died was not enough. They needed diagnosis, treatment, care, and support. She found that patients, some of whom had previously been bedridden, were able to gain some degree of independence with the correct assessment and treatment. She was instrumental in bringing changes like holistic ap-proach, multidisciplinary rehabili-tation and many other in approach of medicine for older people. The practice of geriatrics in the UK is also one with a rich multi-disci-plinary history.Joseph Sheldon (1893-1972) was the Father of Community Geriat-ric Medicine. Sheldon observed many of the problems elderly peo-ple face at home. He realized the importance of good self-care, con-tinence, hearing, and footwear. Of particular importance was his rec-ognition of mobility problems. He documented that 11% of elderly people were housebound. Sheldon recommended home physiothera-py. He advocated falls prevention strategies, such as adequate light-ing at home and the benefits of stair rails.Both Lord Amulree (1900-1983)and Norman Exton-Smith (1920-1990) were proponents of continuing (that is, long term) care of older people and of home assessment visits (not requested by a General Practi-tioner, undertaken by the Geriatrician before hospital admis-sion, and without remuneration). Amulree was present at the inaugural meeting of the British Geriatrics Society and was the first president, a post he held with merit for 25 years.

In 1947 Trevor Howell called a meeting to bring together phy-sicians and an orthopedic surgeon (Lionel Cosin), who all had a special interest in older people. The meeting was the first of

the Medical Society for the Care of the Elderly. Nascher’s term “Geri-atrics” was revived in 1959, when the society was renamed the Brit-ish Geriatrics Society to empha-size the scientific basis of elderly medicine. These pioneers persuad-ed the Minister of Health to ap-point more geriatricians as part of the hospital consultant expansion of the new NHS in UK.

Lionel Cosin was the originator of the Geriatric Day Hospital, and also a pioneer of Orthogeriatrics and Rehabilitation. Cosin rec-ognised the need to get older peo-ple back to their own homes. The objectives of Geriatric Day Hospi-tals were later defined by Brockle-hurst and Tucker. These included medical and nursing care, reha-bilitation, social and recreational activities, and relief of caregivers.Old Age Psychiatry began in the early 1950s. Psychogeriatric As-sessment wards were initially in asylums. Later, ancillary ser-vices were introduced, including day hospitals, nursing and residential homes.