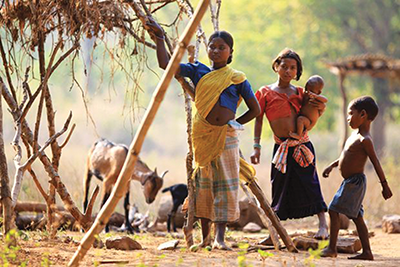 The Ministry of Tribal Affairs, Government of India, is responsible for the planning and coordination of programmes aimed at the development of tribal communities. Their main objective is to provide a more focused approach on the integrated socio-economic development of the  Scheduled Tribes (STs).

Q. Is the government assessing the living conditions of scheduled tribes in order to ensure their actual development?

Several steps are being taken by our department to improve the socio-economic conditions of our targeted communities. the Mechanism of Project Appraisal Committee (PAC) has been introduced in 2014 for the appraisal and approval of projects of the state governments under the Special
Central Assistance to Tribal Sub-Scheme (SCA to TSS) Grants under Article 275(1) of the Constitution and Scheme for Development of Particularly Vulnerable Tribal Groups (PVTGs). The committee is headed by Secretary (Tribal Affairs) with representatives from the state governments, the Financial Advisor and representatives from NITI Aayog among others. Through the process of PAC, detailed discussions are made with the state government representatives of tribal development departments at the time of appraisal and approval of the proposals that are received from the states.

Further, Allocation of Business Rules (ABR) has now been amended in January, 2017, whereby Ministry of Tribal
Affairs (MoTA) has been given the mandate for monitoring the ‘Scheduled Tribe Component’ funds of central ministries based on the framework and mechanism designed by NITI Aayog. An online monitoring system has also been put in place. The framework envisages monitoring of allocations for welfare of STs under the schemes, monitoring of expenditure vis-a-vis allocations, monitoring of physical performance and outcome monitoring for the effective implementation of the schemes. Utilisation certificates are insisted upon as a prerequisite for further release of funds as per the norms of GFR. Additionally, progress reports regarding the status of implementation of schemes are obtained. Departmental officers also ascertain the progress of implementation of various schemes of the department while visiting states. Meetings are also convened regularly at the central level with state officials for ensuring timely submission of proposals, speeding up of implementation of the schemes and reviewing the physical and financial progress.

Q. Is there any scheme to accelerate the development of the tribal communities? And what are the steps taken to create awareness of such schemes?

A. Funds are provided to the state governments under Special Central Assistance (SCA) to Tribal Sub Scheme (TSS) which ensures access to education and health services, providing basic amenities including housing, reduction in poverty and unemployment, enhanced capacity to avail opportunities and protection against exploitation and oppression. The major part of infrastructural development activities and provision of basic amenities is carried out through various schemes and programmes of the concerned central ministries and the state governments.

Our department has taken several steps to spread awareness. Guidelines of the schemes implemented by the ministry as well as the annual reports have been uploaded on the department’s website. Sanction orders mentioning therein the name of the project to be implemented in the states under a particular scheme are uploaded regularly on the website as well. Scholarships are being provided directly in the accounts of the students. With regard to implementation of the Forest Rights Act, 2006, training and awareness programmes are being organised at the village level. State governments are also advised to ensure that concerned Panchayati Raj Institutions (PRIs) should be duly informed about the projects relating to tribal development that are to be implemented in their respective jurisdictions.

Over the years, the central and state governments have been taking various initiatives for socio-economic upliftment of the tribal communities. The efforts have brought out some improvement in terms of various indices relating to housing, sanitation, literacy, health, livelihood, clean drinking water etc. However, there is still a gap in the facilities available to STs vis-a-vis other groups as reflected in census of 2011.

Q; Is there any specific initiative to promote and
preserve the art and culture of tribes?

A. Different tribes in the country have their own distinct art and culture. With a view to preserving tribal art and culture, our department is implementing a scheme ‘Support to Tribal Research Institutes (TRIs)’ under which financial assistance is provided to TRIs set up by different state governments for carrying out various activities to preserve and promote tribal culture across the country through research and documentation, maintenance and preservation of art and artefacts, setting up of tribal museums, exchange visits, organising tribal festivals, etc. The budgetary allocation of this scheme has been enhanced to `80 crore in 2017-18.

Further, Indira Gandhi Rashtriya Manav Sangrahalaya  (IGRMS) Bhopal, under the Ministry of Culture, has also
taken up several initiatives for promotion and preservation of tribal culture. It organises workshops for live demonstration of art and crafts of tribal communities, programmes of live performances of tribal music and also carry out field documentation of various regional fairs and festivals in
different tribal areas of the country.

Q. Have the overall social and economic conditions of the tribal communities improved in the country?

Many schemes and programmes are being implemented by our department for the social and economic development of Scheduled Tribes (STs). It is worth mentioning that we are implementing the scheme of ‘Institutional support for Development and Marketing of Tribal Products and
Mechanism’ for marketing of Minor Forest Produce (MFP) through Minimum support Price (MSP) and development of Value Chain for MFP.

Programmes implemented by our department are gap  filling in nature and not confined to any specific kind of quantifiable measures. Priority for the activities to be taken up is decided by respective state governments as per their
evaluations.