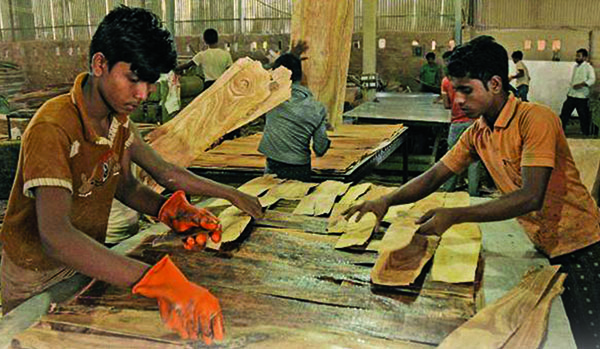 When the Egyptian craftsmen in 1500 BC bonded slender portions of dark ebony wood to the exterior of a cedar casket found in the tomb of King Tut-Ankh-Amon, it led to an impressive construction. Thereafter, this skill was applied by the Greeks and the Romans to produce fine furniture and decorative pieces. Gradually, this art of decorating furniture with sleek wood pieces became termed as veneering. Initially, the pieces of veneer were manually cut until the Englishman Sir Samuel Bentham forged plywood by laminating several layers of veneer with glue to form a thicker piece.

The Indian plywood industry amalgamates the organised as well as the unorganized sectors and features a large list of branded as well as non-branded players. Plywood manufacturers in the organised sector were eagerly awaiting the Goods and Services Tax (GST) to boost their sales in a market dominated by the unorganised sector. With the government rolling out the GST in April this year, the uniform taxation regime is likely to favour these players. Players in the organised segment include Greenply, Century Plywood, Kitply, National Plywood, Uniply Industries, Globe Ply, and others.

Sanjay Agarwal, CEO and Managing Director, Century Plywood, said, “The Goods and Services Tax (GST) will do away with the complexities and inefficiencies of the indirect tax framework, double taxation as well as the cascading effects of regional disparities in tax rates. It will render state-based transactions tax-neutral and sound the death knell for clandestine businesses. This will reduce taxes, enhance ease of business and improve tax collections.”

However, the price advantage enjoyed by unorganised manufacturers may diminish gradually, making high-quality plywood competitive. Existing manufacturers pay 16% excise duty and 4% sales tax on their products. According to the Federation of Indian Plywood & Panel Industry, lowering of excise duty to less than 10% would force the unorganised plywood units to make excise payments regularly.

The demand of plywood witnessed a jump owing to the rise in the real estate sector. The surge in commercial space and rise in number of households will propel the Indian plywood industry to reach $479.7 billion by 2019.

Nilanjan Saha, Marketing Manager, Globe Ply, told BE, “Plywood sector is related to the construction industry. The upswing in the plywood industry started with the boom in the infrastructural sector. Globe Ply has witnessed more than 70% rise in the last 10 ten years.”

According to a Research Associate of Ken Research, “The industry has a lot of potential to grow as the demand for housing has consistently grown and is likely to continue in the future. Plywood is expected to face a stiff competition from its substitute MDF board but the government support in plywood wouldkeep it in the safe zone.”

Sajjan Bhajanka, Chairman, CenturyPly,told BE, “Century Ply has been capable to capitalise on the resource-rich Myanmar and Laos. When some of the largest Asian timber producing countries selected to ban the export of raw materials, CenturyPly commissioned units in the timber rich Myanmar and Laos. The company is also contemplating on entering Indonesia.”

CenturyPly is also looking to invest `380 crore to set up a medium density fibreboard plant in Hoshiarpur, Punjab which is expected to be commissioned by March 2017. The project will have an annual capacity to produce around 200000 CBM of MDF.

Globe Ply, however, has not yet tapped the foreign market but has invested in India with high returns. Nilanjan Saha informed, “Our product has also gone to Bangladesh, Australia, and Dubai but the market has not grown much. Our main market caters to Bengal, Bihar, and Odisha.”

Uniply is also planning a large leap in its turnover in the next five years. At present, Green Ply Industries is also expanding its Rajasthan laminates factory plant and is considering new investments in its plywood factories located at Kolkata and Nagaland.

The plywood industry has gone through several challenges. In 2000, the Supreme Court had stopped the Union government from granting fresh licences to wood processing industries. Also, there is a domestic ban on logging and most of the raw material is being procured from Africa, Vietnam, Laos, and New Guinea.

Earlier we were importing timber from Myanmar, Laos, Asia and Indonesia which is not available now. But the good thing is that most of the Indian companies have gone to Laos and Myanmar and are producing there, bringing it back to the country and compensating the loss. Plywood industry also faces challenges from other categories of products like the wooden panel, MDF, and other products like wood-plastic, wood-cement and others”, added Bhajanka.

Despite such odds, Bhajanka said that plywood would maintain its place and it will grow at least by 5-10% every year. However, according to industry insiders, there are no governmental initiatives to boost this sector.

Saikat Saha, Founder and Director, Woodgeek, an online venture selling wooden customized items, told BE, “A lot of people see timber harvesting as an evil practice but it is not. Any company that uses timber as raw material should be extremely careful and protect these raw materials as it may affect our own supply chain in future. The trick is to harvest the raw materials in a renewable way.” He added, “The small companies don’t follow regulated course to harness raw materials. The governmentshould impose laws equally for all companies in every state and reduce bureaucratic hurdle. The government should also set up an independent body to regulate timber harvesting and should not be biased towards states in terms of timber harvest. Nationwise regulatory bodies should be set up.

For example, state like Kerala is extremely strict in harvesting timber and manufacturing ply but in case of Tripura, it is not the same. 1000 metric tonnes of rubber, wood is wasted which they claim to use it for interior and exterior ply every year.

But the government won’t allow us to get those to work. The government should issue new licenses to companies but after a thorough check.”

There is a considerable shift in consumer choices from non-branded to branded plywood. Since plywood is a onetime buy, customers generally prefer the branded ones as the low price offerings by the non-branded players may have quality issues.

The introduction of GST will further facilitate the organised sector. The government must promote this employment rich sector and put such policies in place which will ensure the growth of this sector.