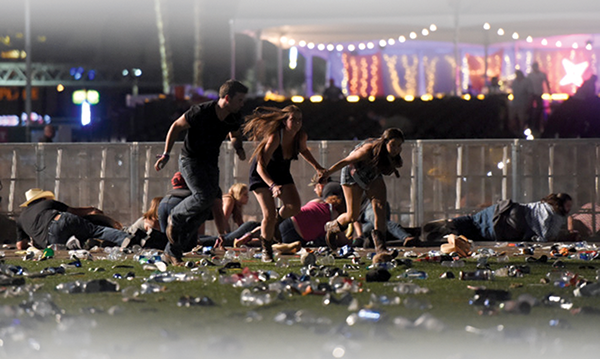 The recent shooting in Las Vegas killed at least 59 people and left 527 injured. Subsequent investigations revealed an arsenal of 42 explosives, firearms and thousands of ammunitions from the suspect’s home and hotel room. The shooting has again spurred public debate on gun control laws in the US. The US President Donald J. Trump has been reported as saying, “We will talk about gun laws as time goes by.”

The US’ firearm homicide rate is over six times higher than neighbouring Canada’s and 45 times higher than England’s. With the highest rates of gun homicide, suicide and accidental death in the industrialised world, it is not surprising that many Americans feel scared. The percentage of Americans who fear walking alone at night has increased from four in 2004 to ten in 2017 and yet, national authorities have consistently refused introducing measures to curb gun violence. Strangely, the American Congress has opted to undermine gun control legislation, curb gun safety awareness and abandon violence prevention programmes. Meanwhile in many states laws intended to promote the responsible use of guns are being repealed. Instead, legislation that reproduces irresponsible firearms use – including so-called “stands your ground” laws are being pursued. So what explains America’s reversal on gun control?

The reluctance of politicians to tackle gun violence can be ascribed principally to the relentless lobbying efforts of the National Rifle Association (NRA). Simply put, governors, senators and congressmen fear incurring the wrath of the NRA and the firearms industry representatives. It is for good reason that the NRA is consistently named one of the most influential lobby groups in Washington. It is no secret that the NRA is heavily supported by contributions from an extant rejuvenated gun industry. With around 300 manufacturers representing $6 billion in revenue, America’s gun-makers have had every reason to contribute liberally to the lobby group’s coffers – over $76 million in 2009 alone. And they garner support from small and medium-sized gun sellers as well. There are some 54,000 licensed dealers and the industry as whole may employ as many as 100,000 Americans. The NRA has also successfully consolidated its base. It is imperative to note that the United States is the largest supplier of arms which gets distributed to different parts of the world followed by Russia and China. According to the Stockholm International Peace Research Institute (SIPRI) the global arms trade has grown by 16% from 2005-2009 to 2010-2014.

These countries have customers around the world. Most recently, from 2014 to 2017, the US and Russia have dominated the arms market in the developing world with both nations either ranking first or second for all four years in terms of the value of arms transfer agreements. From 2014 to 2017, the US made nearly $113 billion of these agreements, or 54.5%. During the same period, Russia made $31.1 billion or 15% of all such agreements, expressed in current dollars. Collectively, the United States and Russia made 69.5% of all arms transfer agreements with developing nations during this four-year period. The total value of US arms transfer agreements with developing nations comprises primarily of major orders from clients in the Near East and Asia. The US arms agreements with Saudi Arabia were extraordinary and represent the largest share of US agreements with the world or the developing world since 2011. According to the Research Director of the Igarapé Institute and Director of Research and Policy at the SecDev Foundation, Dr. Robert Muggah, “Terrorism is on the rise – but there’s a bigger threat we’re not talking about like homicide and death by gun violence.” Professor Tanwir Arshed of Presidency University, told BE, “Weapon culture is nothing new in America and nor is it unique to the Americans. From the assassination of Lincoln to the recent mayhem of Las Vegas it’s clear that gun culture runs restriction free in Washington. He further added that the reports of Gunpolicy.org and survey done by Guardian and The Washington Post validates my point. But my main concern is about gun politics that moves in US in the name of electoral funding from agencies like NRA and others.” He added, “Gun politics must be stopped and there must be strong and stringent laws made by the Congress for the acquisition and ownership
of weapons”.