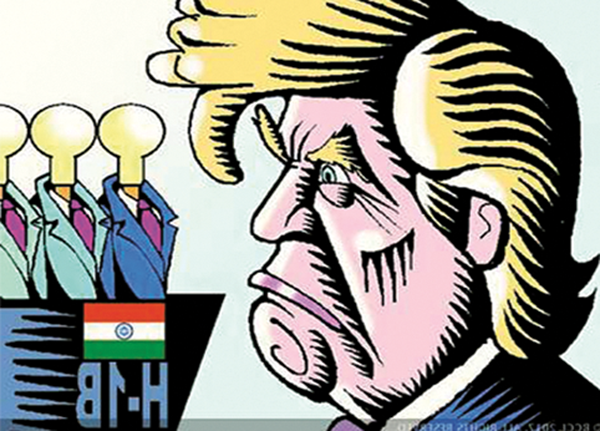 The year 2017 began with a speculation regarding the Trump regime curbing the H-1B visas. But to everyone’s relief, the US Citizenship and Immigration Services (USCIS) has announced that they will receive applications for H-1B visas for the 2018 fiscal year and it will start from April 3. The USCIS did not mention the time period for accepting the  H-1B visa applications. In the past, the agency normally accepted applications for the first five business days. Fiscal year, 2018 begins on October 1, 2017.

Sushma Swaraj said that the government conveyed to the US that IT professionals did not steal jobs but contributed to the US economy and made it stronger. She also said that Indian authorities are taking up this matter with the highest levels in the US administration. US Labour Secretary nominee Alexander Acosta, during the hearing for his confirmation as Labour Secretary, told the US Senate that “Some Americans have seen jobs go overseas. Some Americans have seen jobs filled by foreign workers. Indeed, I've read reports that some Americans have been asked to train their foreign replacements. And some Americans see that jobs are available, but these available jobs require skills that they do not have.” He also assured that H1-B visas were given for these jobs, where there was a lack of skilled personnel. While explaining he said that, when he first came across with the Members of this committee, he repeatedly heard that in some states the jobs are there, but the skills are not. In one of the states, a community college was teaching welding techniques that employers no longer used.

This announcement will give relief to the Indian IT companies. USCIS said H-1B programme allows companies in the US to temporarily employ foreign workers in occupations that require the application of a body of highly specia-

lised knowledge and a bachelor’s degree or higher in the specific specialty, or its equivalent. H-1B specialty occupations may include fields such as science, engineering and information technology.