He believes when a company is sold or liquidated by the government, it kills entrepreneurship
11:33 am 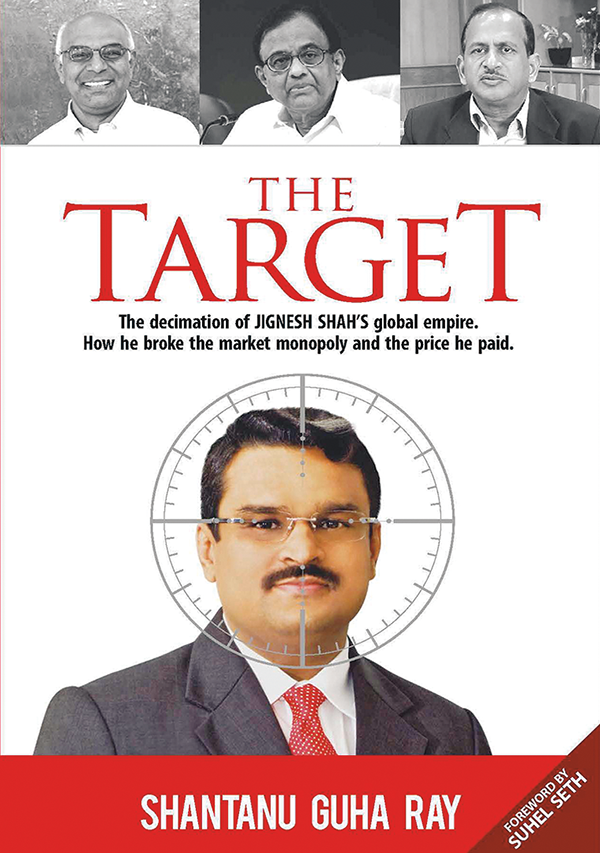 Senior journalist Shantanu Guha Ray’s latest book ‘The Target’ is gaining momentum in sales and
has been promoted to the first position on Amazon India, for the second time in a row. The book is a result of the author’s research regarding challen-ges to entrepreneurship and technology-led innovations from quarters that are responsible for facilitating their growth.

The book takes a deep dive at the NSEL payment crisis. It explains what went wrong in the payment crisis and how the crisis was perpetuated. More importantly, it invokes certain pertinent questions. In this book, the author meticulously probes the motives of those who shunted Jignesh Shah out of the exchange business and what it meant for India’s political-economic climate. In the foreward of the book Suhel Seth pens that “…However, all concentrated actions were directed only at
Shah and the FTIL Group subse-quently to eliminate them out of Exchange space.”

The 233-page book looks into Jignesh Shah’s global empire and how he had to pay the price for breaking the market monopoly.
The chairman of Financial technologies India Ltd. (FTIL), Shah created ten world-class exchanges across a variety of asset classes, such as commodities, equity, currency bond and electricity in a period of ten years in India and abroad. According to
the author, “… Jignesh Shah… whose two vibrant com- panies, MCX and NSEL, were the finest platforms for trading in agricultural commodities with an ultimate aim to benefit the farmer. Shah had worked on the thoughts of the then Prime Minister, Dr Manmohan Singh, who wanted a single market for both manufactured and agricultural produce.” Jignesh’s companies were original IP-based innovations. Interestingly, these companies did not involve any subsidy from the government or the banks for any land, labour or taxes for which Indian state-run companies and corporates are known to compete eagerly. Shah was
harassed because of vested political and business interests and was interrogated thrice. According to the author, Shah was framed. He was proven guilty but as the author opines that if there is a crisis in the ICICI bank then K.V. Kamath can’t be held responsible.

The author admits that the book is about Jignesh Shah. He believes when a company is sold or liquidated by the government, it kills entrepreneurship. Sugata Ghosh wrote in The Economic Times on May 9, 2014, that “Jignesh had ruffled many feathers and made powerful enemies, including a senior bureaucrat. In the past six months, these men have worked overtime to make sure Jignesh faced arrest… While Jignesh was waiting in the EOW (on May 7, 2014), a senior officer of the Mumbai Police was having a meeting in a suburb with a Finance Ministry official who had landed up unscheduled. When the EOW officer returned a little after 5 p.m, Jignesh was told that he was being taken in.” Shantanu believes that Shah will not be able to return to the market again after the prolonged legal battle. He believes that the government is trying to promote a monopoly market, facili-tating certain companies. Whenever there is a Jignesh in the market with new path-breaking ideas, it becomes an obstacle in the path of the government. The irony, according to the author, is that Jignesh had to go to jail thrice but the government is unable to bring people like Vijay Mallya under its books.

Shantanu Guha Ray is a Jaipur-born Bengali, who was brought up in Delhi. Kolkata has also been an integral part of his life. He is a Wharton-trained journalist with over three decades of experience, specializing in investigative, business and human interest stories. He has won the Laadly Award and bagged the Wash Award for working on water related issues. He has also won the Ramnath Goenka Award and the Washington Press Club Award. He scooped the billion-dollar coal scam in 2011, followed by the airport scandal in Delhi the following year.

In an informal chat session with BE, Guha Ray recalls the beginning of his journey. During the beginning of the 1980s, there were news gatherers but over the years, journalists have become news writers. He believes that there is a serious lack of investigative work being pursued by journalists. He feels that the corporate ownership of media houses is altering journalism.

The Central Bureau of investigation (CBI) has charged 20 entities and some of their officials for cheating state-owned commodities trading firms PEC Ltd and MMTC Ltd in connection with the `5600 crore payments fraud. NSEL, its parent Financial Technologies India Ltd (FTIL), PD Agro Processors Ltd, Dunar Foods Ltd and Mohan India ltd are among the entities.

The chargesheet filed by the CBI in December with the special court in Mumbai, accused Jignesh Shah, former Chairman, FTIL, of cheating and criminal conspiracy. This chargesheet made CBI the third agency to file a chargesheet in the case. The 150 page chargesheet found a fund trail due to which PEC and MMTC had a loss of ` 120 crore and ` 105 crore respectively. CBI alleged at the beginning that Shah had devised a conspiracy to cheat PEC and siphon by floating “accommodative and fraudulent paired contracts”.

The chargesheet writes that the FTIL was the major beneficiary of the revenue earned by NSEL. It is also alleged that paired contracts were the main source of income for the commodities bourse. The lawyers representing FTIL has sharply denied the allegation on the ground of inadequate factual base. They are also confident about their client’s walking free. However CBI says that the minutes of the board meetings of NSEL were vetted and approved by FTIL before issuance. The chargesheet also noted that FTIL received ` 90.69 crore from NSEL as software maintenance charge during 2011-13, which again has been denied by the accused. FTIL claimed that it did not receive any benefit as NSEL never declared any dividends.  A spokesperson said that they were ready to refund the investors by selling the assets that were not linked by the enforcement agencies.