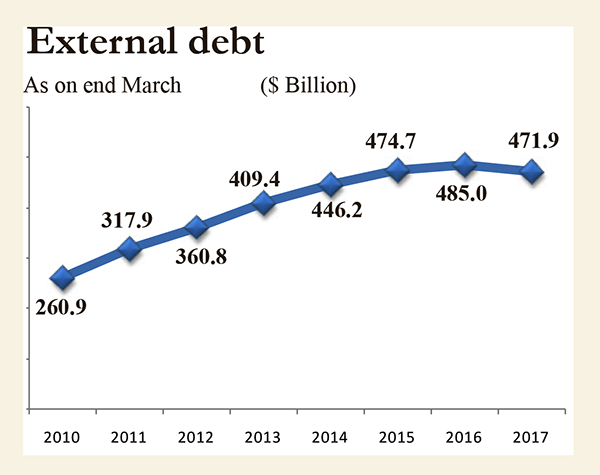 Accumulation in debt stock has been the prime problem faced by both developed and developing countries. The developing countries face this problem more often as they need to borrow to facilitate their growth process and to accelerate the pace of growth. High and unsustainable levels of debt have serious impact for the economy in terms of heavy debt servicing resulting in shortages of funds back home to carry out the growth process.

According to the World Bank and the IMF,  “a country can be said to achieve external debt sustainability if it can meet its current and future external debt service obligations in full, without recourse to debt rescheduling or the accumulation of arrears and without compromising growth”.

The extent of external debt is generally determined by the kind of policy mix that the government has in place for  borrowing funds for private and public purposes. This also  depends on the interest rate prevailing in the economy.

On whether India’s external debt meets the World Bank’s yardstick, financial analysts argue that within the emerging market peer group of the BRICS nations, India is doing fairly well. China has the most comfortable position followed by India. It is important to note that despite the economic liberalisation of the 1990s, the domestic economy has not fallen into an external debt trap, defined as borrowing to make interest payments. Given the growth outlook and scope for further reform, India seems to be in a somewhat comfortable position with regard to external debt.

Prior to liberalisation, India’s external debt comprised mostly of institutional and multilateral loans as the loans were often taken to meet other purposes than to accelerate growth. But things changed after the liberalisation move and external debt became an important catalyst of the country’s growth mechanism. In 15 years, between 2001 and 2016, the aggregate  external debt increased nearly five times from $ 101 billion to $ 485 billion.

The increase in external debt has largely been accounted for by ECB. Its share in total foreign debt increased by more than 12% points from 24.1% in 2001 to 36.7% in 2017. Between 2010 and 2017, the share went up by about nine
percentage points. The escalation in ECBs was primarily caused by interest rate differential. Interest rates at home climbed during this period with the central bank raising its key policy rates to tame

inflation. ECB is an instrument used in India to facilitate the access to foreign money by Indian corporations and PSUs. ECBs

provide an additional source of funds to the companies allowing them to supplement domestically available resources and take advantage of lower interest rate prevailing in the international financial markets. ECBs have become very popular in India due to the limitations of India’s debt market in the form of high interest rate and short maturity period.

To facilitate the flow of foreign funds, the RBI in 2015 released a comprehensive framework for ECBs for making it easier for Indian corporates. The new framework reduces the restrictions on the end-use of funds borrowed overseas and expands the set of overseas lenders from whom funds can be borrowed. Most of these relaxations are likely to apply to long-term borrowings even as RBI continues to keep a check on the quality and quantum of short-term borrowings.

The overreaching principles of the revised framework include “a more liberal approach, with fewer restrictions on end uses, higher all-in-cost ceiling etc., for long-term foreign currency borrowings as the extended term makes repayments more sustainable and minimises roll-over risks for the borrower,” RBI said in a press release.

The ECBs have their own risks, but India seems to have done well to keep vulnerability under control. A study by global ratings major Moody’s Investors Service in 2015 found that at 23.9%, India had one of the lowest foreign debts to GDP ratios among the 83 emerging market countries. Also among the Asian countries covered in this survey, compared to average debts to GDP ratio of 47% India’s was less than half that number.

With higher GDP growth, India has succeeded further to bring down its external debt to GDP ratio. The ratio was estimated a 20.2% -- the lowest in five years.