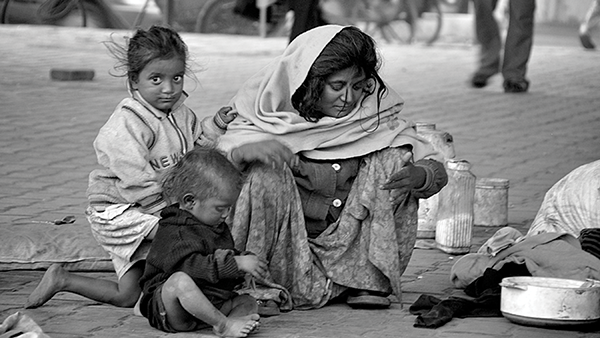 Riding high on Indian Prime Minister Narendra Modi’s electoral promise of ‘good times’- a record 90 Indians with a combined net worth of $295 billion featured in Forbes billionaires list of 2015. As many as 28 of them made their appearance for the first time in 2015.

The number of billionaires has increased as also their net worth but in the hind side of this phenomenal achievement of the country’s upper strata, the world’s highest growing economy until recently, has turned out to be the home of the largest number of empty stomachs.

GHI is a multidimensional measure that describes state of hunger situation on regional, national, and global levels. It is published annually by IPRI since 2006. It ranks countries on 0 to 100 point scale calculated by taking into account four socio-economic parameters – undernourishment, child wasting, child stunting and child mortality. Zero indicates best score and 100 is worst. Stunting means deficiency in height in relation to age, reflects under nutrition and wasting means low weight in relation to a child’s height and reflects acute under nutrition

The GHI report comes after the latest National Family Health Survey (2015-16) had already warned of three major concerns of child nutrition in the country. First, the availability of solid food with breast milk for young children declined from 52% to 42%. Second, the proportion of children between six and 23 months who received an adequate diet came down to 9.6% and the third, no more than 48.4% of households had access to improved sanitation facilities according to this report. Sanitation is an important factor in improving nutrition.

“Even with the massive scale of national nutrition-focused programs in India, drought and structural deficiencies have left a large number of poor in India at risk of malnourishment in 2017,” said P.K. Joshi, IFPRI’s South Asia director.

With 21% of under-5 children suffering from wasting, the report notes that India is one of the very few countries that have made no strides over the last 25 years in checking the prevalence of this indicator. Only three other countries in GHI 2017, Djibouti, Sri Lanka and South Sudan – have child-wasting score over 20%.

With a GHI score of 31.4, India is at the high end of the ‘serious’ category, the report said, adding that “given that three quarters of South Asia’s population reside in India, the situation in that country strongly influences South Asia’s regional score”.

India’s poor performance brings home the disturbing reality of the country’s stubbornly high proportions of malnourished children – more than one-fifth of Indian children under-5 weigh too little for their height and over a third are too short in height for their age.

India’s pathetic performance would look further glaring when compared with its neighbours. Data from the GHI report show that India’s rank (100) was lower than that of all its neighbours – China (29) Nepal (72), Myanmar (77), Bangladesh (88), Sri Lanka (84). Only Pakistan had a lower rank than India at 106. Even North Korea (93) and Iraq 978) fared better than India in GHI rankings.

And when the comparison is done with the BRICS countries (Brazil, Russia, India, China and South Africa) India’s position looks pathetically poor. It was the last among them. Interestingly, BRICS members are all leading developing or newly industrialized countries and are distinguished by their fast-growing economies. India’s GDP has grown significantly over the years but it has failed to improve the life of its poor.

GHI survey corroborates World Bank’s earlier findings that say that India accounted for the largest number of people living below international poverty line in 2013, with 30% of its population under the $1.90-a- day poverty measure. One in three of the poor population worldwide lives in India the world body said in its inaugural edition of the report ‘Poverty and Shared Prosperity.

India accounts for one in three of the poor population worldwide, the world body said in its inaugural edition of the report ‘Poverty and Shared Prosperity’.

As for child under-nutrition, a study by the World Bank Group and UNICEF ‘Ending Extreme Poverty: A focus on Children’ finds that India is home to over 30% of almost 385 million children living in extreme poverty, the highest in South Asia.

That is, despite high GDP growth the fate of the poor and their children has not improved much. May be Amartya Sen was right in cautioning Indian policy makers’ obsession with GDP growth figures without looking at its distribution aspects.