India’s healthcare not in a good health
19:41 pm

The second wave of the Covid-19 pandemic is receding. Rules and regulations are being relaxed and the country’s economy is again coming back to pace. But healthcare experts have cautioned that India should be prepared for the third wave. Additionally, the new delta plus variant of the virus has emerged as a new delinquent which is being identified as a ‘Variant of Concern’ (VOC). This variant is spreading faster.

India presently has 1.4 beds per 1000 people, 1 doctor per 1445 people and 1.7 nurses per 1000 people. World Health Organization (WHO) identified the aggregate density of health workers in India to be well beyond its set standards. An additional three million beds will be needed for India to achieve the target of three beds per 1,000 people by 2025. Along with those 1.54 million doctors and 2.4 million nurses will also be required to meet the growing demand for healthcare in India.

Non-communicable diseases (NCDs) constitute 65% of deaths in India that is partially related to lifestyle choices. Strengthening primary healthcare facilities with adequate human resource and equipment is necessary to mitigate this challenge.

In budget 2020-21, India spent 1.8% of its Gross Domestic Product (GDP) on healthcare. But in Budget 2021-22, the government has committed approximately 2.5-3% of its GDP to the healthcare sector. Investment for health infrastructure also expanded by 137% on YoY basis. Total health sector allocation for FY22 has been `223,846 crore. It was certainly up from the earlier budgetary allocation of `94,452 crore.

However, the US spends over 16% of its total GDP on healthcare. On the other hand, Japan, Canada and Germany spend over 10% of their GDP for the same. This indicates that the Indian government should spend more on the sector to provide better, improved and affordable healthcare services to all.

India has one of the highest levels of ‘Out of Pocket Expenditure’ (OOPE) in the world. Currently, OOPE constitutes above 60% of all health expenses. It is a huge burden for the country as a large segment of India’s population is poor. It is estimated that around 63 million people fall into poverty every year due to lack of financial protection for their healthcare needs. To address this challenge, the PM-JAY - the government-sponsored health insurance scheme was launched under the Ayushman Bharat initiative.

Additionally, the Union government’s Economic Survey of 2020-21 states that India ranks 179th out of 189 countries in prioritisation accorded to health in its government budgets (consolidated Union and state government). The report also states, “Prioritisation of health in India is similar to donor-dependent countries such as Haiti and Sudan, and well short of its peers in development.”

The health index for states is developed by Niti Aayog in consultation with the Union health ministry. The World Bank has also their rankings that are based on 23 health parameters ranging from mortality rate and sex ratio to functioning cardiac care units. In 2019, Kerala was at the top followed by Andhra Pradesh and Maharashtra. Incremental changes were seen in Haryana, Rajasthan, Jharkhand, Andhra Pradesh and Assam.

According to Economic Survey of 2020-21, Kerala and the former state of Jammu and Kashmir have high density of doctors. But states like Punjab, Himachal Pradesh and Chhattisgarh have a very low density of doctors. Andhra Pradesh, Delhi and Tamil Nadu reflect better balance of doctors, nurses and midwives. 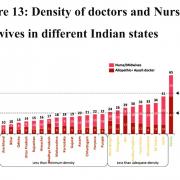 On the other hand, around 65% of hospital beds now cater to almost 50% of the population in Kerala, Uttar Pradesh, Maharashtra, Karnataka, Tamil Nadu, Telangana and West Bengal. The other 50% is in the remaining 21 States and 8 UTs have only 35% of hospital beds.

Around 74% of outpatient care and 65% of hospitalisation care is provided through the private sector in urban India.”

But Lalit Mistry, Director - Healthcare, KPMG in India on February, 2021 in a paper titled ‘India’s healthcare sector transformation in the post Covid-19 period’ stated, “Hospitals and labs witnessed a sharp decline in revenue due to delayed medical tourism and reduced elective processes. The outpatient departments (OPDs) had also been closed almost throughout the year as per the government advisory.”

The Indian Ministry of Health and Family Welfare is concerned about the challenges in the sector. To further strengthen health infrastructure, ambitious programmes have been taken up in a phased manner. Improving tertiary health infrastructure through construction of super speciality blocks or trauma care centres in existing government medical college institutes are some of those. 75 government medical college up-gradation projects have been approved so far. Construction work of super speciality block or trauma care centre has been completed in 11 government medical colleges during this year. 44 projects were already completed in the previous years.

The Union government also approved `37,130 crore for continuation of ‘National Health Mission’ in the last budget. The Ministry of AYUSH was also allocated `2,970 crore - up from `2,122 crore showing the Union government’s concern for the sector.

As of May, 2021 nearly 11.9 lakh health ID cards were generated under the National Digital Health Mission (NDHM). A total of 3,106 doctors and 1,490 facilities has registered on the platform, according to government data. This is an achievement for the health ministry and may lead to significant advancements in the Indian healthcare sector.