Submitted by TusharK.Mahanti on Wed, 2017-05-03 15:14
Most studies on the Indian banking industry nowadays begin with the dismal consequences of the rising non-performing assets (NPAs) of the sector. The slowdown in the economy in the last few years has led to a rise in bad loans that have negatively affected the asset quality of the banks.

Despite the rise in the NPAs, India’s banking sector is set to become the fifth largest banking industry in the world by 2020 and the third largest by 2025 according to a recent KPMG-CII report. India’s banking sector has been expanding rapidly over the past years followed by the emergence of universal banking, higher economic growth, and globalisation.

The banking industry is considered to be the lifeline of an economy. It activates and sustains economic growth. “If we look at the statistics, India being one of the top ten economies of the world and with relatively lower domestic credit to GDP percentage provides great opportunity for the banking sector to grow”, the KPMG-CII report on the banking sector has observed. 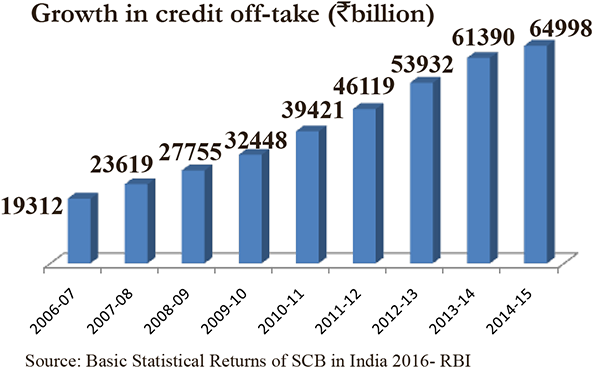 The economic liberalisation in the early 1990s that prompted huge private sector investment led to a steady increase in the business of the banking sector. The credit off-take surged aided by a strong economic growth, rising disposable incomes, increasing consumerism and easier access to credit. Total credit extended by India’s scheduled commercial banks (SCB) went up to Rs. 64,998 billion by 2014-15 from Rs.19,312 billion in 2006-07. Demand has grown for both corporate and retail loans; particularly for the services, real estate and consumer durables.

Aggregate deposits have grown nearly three and a half times during the same period from Rs. 26,119 billion in 2006-07 to Rs. 88,989 billion in 2014-15. Deposit growth has been mainly driven by strong growth in savings amid rising disposable income levels. Access to the banking system has also improved over the years due to persistent government efforts to promote banking-technology, and expansion in un-banked and non-metropolitan regions 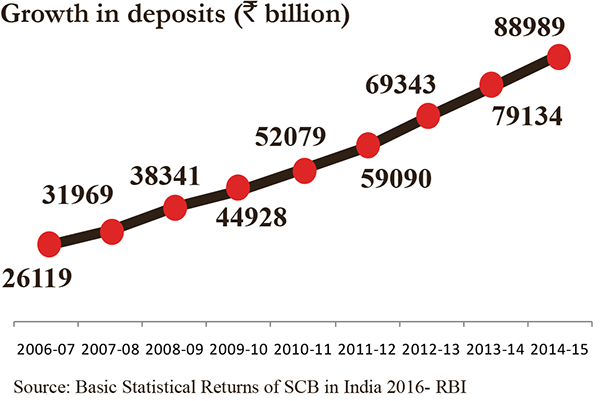 But not only in terms of business, the sector has grown significantly geographically, too. The Financial Inclusion Plan (FIP) of the government has provided a structured and planned approach to financial inclusion with a commitment at the highest echelons within the banks. Out of 2,259 rural bank branches opened during April 2015-March 2016 as many as 1,670 branches were opened in un-banked rural sector. Around 71 million basic savings bank accounts were added taking the total to 469 million by March 2016.

Amid higher business growth and the extension of services to un-banked rural areas, the woes of bad loans have, however, continued. The aggregate net non-performing assets of the commercial banks have almost doubled in 2015-16. Not only did banks suffer huge losses due to problem loans, just a handful of stressed accounts were restructured despite new ammunition provided by the regulator.

Look at some of the findings of the RBI’s recent report. The asset quality of the banks has deteriorated further with gross non-performing advances ratios (GNPAs) increasing to 9.1% from 7.8% between March and September, 2016 pushing the overall stressed advances ratio to 12.3% from 11.5% during the same period.

The credit quality of large borrowers (with exposures of  Rs.50 million and above) has deteriorated considerably in 2016. The system level credit risk of the banking sector against macroeconomic stress revealed that the GNPA may increase to 9.8% in 2017 and further to 10.1% by 2018, the report has observed.

The macro stress test also revealed that the provisioning of capital adequacy for the banks, particularly of the public sector banks, need to be further enhanced from the present level of 5.8%. While there has been a persistence of subdued business growth at the system level, the public sector banks have lagged behind their private sector peers, the report has observed.

There has been a contraction of system level net profit of the banks due to higher growth of risk provisions. The sectoral credit risk as evident from the macro test has revealed that the iron and steel industry is expected to record the highest GNPAs. The report said that the banks in general may, however, withstand liquidity shocks with their high quality liquidity assets and SLR investments.

To counter the slow pace of the judicial system, the RBI has introduced a number of schemes where banks could take control of the defaulting company without knocking on the doors of the courts or can restructure the loans with an upside if the company turns around in due course. Bankers, however, feel that unless the business sentiment improves, no package could work.

The government’s focus on resolution of stressed legacy accounts of banks at the other end has continued. The legal framework has been strengthened to facilitate resolution through the enactment of the Insolvency and Bankruptcy Code and the amendments to SARFAESI and Debt Recovery Tribunal Act. The finance minister in his 2017-18 Budget has provided Rs. 10, 000 crore for recaptalisation of banks.

In order to give a boost to banking sector the finance minister has also proposed to increase allowable provision for Non-Performing Asset from 7.5% to 8.5%. This will reduce the tax liability of banks. “I also propose to tax interest receivable on actual receipt instead of accrual basis in respect of NPA accounts of all non-scheduled cooperative banks also at par with scheduled banks. This will remove hardship of having to pay tax even when interest income is not realised”.

These are good moves but as BE’s  editorials have repeatedly  suggested that “criminal investigation for funding decisions is not warranted. It dispirits the entrepreneurial spirit and kills the aptitude for investment. This is a major reason why India Inc. has been shy to and slow in investing in fresh funds. Corporate India’s borrowing is down by 31% in the 11 months of this fiscal year”.

The financial sector probably has been influenced most by the innovations in information technology. The age of digitalization and move towards adoption of new technology have transformed the way banks do business today. Information technology has played a vital role in shaping India’s new-age banking activities. Banking technology today directly influenced by the spread of smart-phones and extensive availability of 3G and 4G networks. Advances in technology have also created newer customer expectations, multi-channel structure and progressive product offerings in the banking industry.

Indian banks today have the onus of being proactive in technology making them available to customers anytime and anywhere. To note, these factors also serve as the basis for emerging trends in the banking industry of 2016. Banking technology is emerging as synonymous with the concept of everyday banking. This becomes a credible reality only when there is complete digitization of banking operations, as well as a strong ecosystem of cross-industry partners and providers.

Away from the immediate concerns on growth and currency management in the light of the recent demonetization drive, the country’s central bank has pointed out some deeper concerns. On the one hand, India’s macroeconomic conditions broadly remain stable and resilient with considerable moderation in consumer price inflation. But developments in the financial sector tell a different story. The banking stability indicators as set out in the recently released Financial Stability Report of the RBI depict some serious concerns. The report highlights the elevated risks in the banking sector emanating from “continuous deterioration in asset quality, low profitability and liquidity”. That’s a triple whammy made worse by the upheaval caused by demonetisation, and adds new complexity to a situation that was already spiralling out of control.

Amid constraints and problems the future of banking in India, however, looks positive and transformative. Despite the somewhat difficult current operating environment, banks remain the largest financial sector intermediary in India. In future, technology will make the engagement with banks more multi-dimensional even as other entities, markets and instruments for credit and financial services continue to develop and expand.