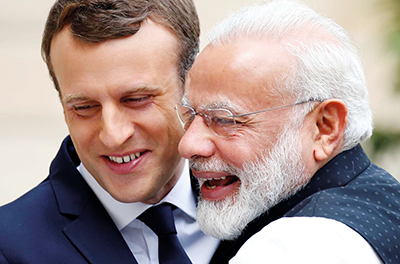 The French President Emmanuel Macron will be accompanied by a team of businessmen and French officials during his trip to India. According to the Indian Ministry of External Affairs (MEA), the goal of this visit is to strengthen the bilateral economic, political and strategic ties. The relationship between the countries is one of the most important and comprehensive global bilateral engagements. The emphasis of the meeting will be on military and nuclear deals. Indian Prime Minister Narendra Modi and Macron are to co-chair the founding conference of the International Solar Alliance (ISA).

Maritime alliance to take the lead

There are significant prospects for Delhi’s bilateral maritime security cooperation with Paris in the Indian Ocean. Over the time consultations between foreign and defence ministers as well as the national security advisers have focused on finding ways for India and France to work together. These discussions are likely to be turned into concrete decisions by the time French President Emmanuel Macron visits Delhi.

Maritime security and nuclear cooperation will be the important items on the table when French President Emmanuel Macron holds discussions with Prime Minister Narendra Modi. It may be simplified as France feels that they have shared interest in the Indian Ocean region with India. The French feel that maritime and nuclear cooperation will enhance the bilateral relationship between the two countries.

While the quadrangle comprising India, Japan, Australia and the US is pitched as the new political counterweight to China in the India-Pacific space, India and France have common interests in the Indian Ocean. The two countries have realised that the way forward is closer bilateral cooperation rather than rushing into a multilateral format. During this visit, both the countries are expected to sign agreements that will allow  India, logistical access to French military bases in the Indian Ocean. By itself, this could become a force multiplier for India, especially since New Delhi, despite clear interests in the Indian Ocean, has been a laggard in securing its interests. President Marcron in an interview said that, “I want India to be one of the key partners in the region, and a credible partner, in terms of security, in order to have what I’d call liberty of sovereignty.  I think you have a big challenge, which is to preserve your sovereignty in the Indian Ocean/ Pacific Ocean region. We are part of this region through our geography. And a lot of people ignore that. But we are not just a European power. We are part of the Indian Ocean/ Pacific Ocean powers through the Reunion Island and an island in the Pacific and it’s very important to me to be part of this partnership in terms of collective security.” This is significant as France is the largest resident power in the Indian Ocean with the largest amount of real estate, including about 11 million square kilometre of exclusive economic zone particularly in the Mozambique Channel with over 10 islands as part of French overseas territories. India will also be placed well to regard France as its strategic partner for the French military bases in Djibouti, Abu Dhabi and Reunion Islands. According to C. Rajamohan, Director of Carnegie India, “Although India and France have long shared the Indian Ocean maritime neighbourhood, they have not put it at the heart of their partnership until now. The new regional framing will help develop the much needed depth to the India-France strategic partnership through maritime burden-sharing and reinforcement of each other’s positions in the Indo-Pacific.”

France is not the first to sign a logistical pact with India. Washington concluded a Logistics Exchange Memorandum of Agreement (Lemoa) with New Delhi in August, 2016. Singapore has already allowed Indian naval ships extended access to its port facilities. Muscat recently entered into a pact with India, granting Indian warships access to the strategically important base of Duqm on Oman’s southern coast. French facilities are likely to add to India’s network of nautical outposts in the Indian Ocean Region, including the Andaman and Nicobar Islands, and Seychelles, where New Delhi plans to build and operate a military base. On the other hand strengthening India’s alliance with France will shift India away from the legacy of nonalignment and military isolationism, and will progress towards coalition building with other powers.