INSECT STEALING CAN HARM OUR ECOSYSTEM
00:00 am 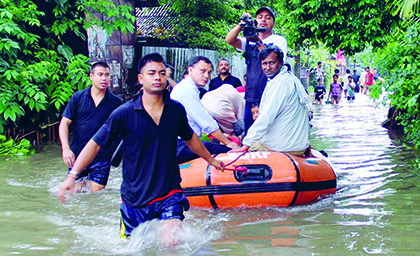 The state of Assam has been experiencing a disastrous flood, which has brought the state to a standstill. 21of the 32 districts are severely affected. According to Assam State Disaster Management Authority (ASDMA), the worst hit districts are Lakhimpur, Bongaigaon,Dhemaji, Barpeta, Goalpara, Dhubri, Darrang, Morigaon, Sonitpur, Kokrajhar, Dibrugarh, Biswanath, Golaghat, Jorhat, Kamrup Metropolitan, Nalbari, Chirang, Sivasagar, Nagaon, and Karbi Anglong.

Heavy rainfall has led to floods affecting the lives of more than 11 lakh people residing in nearly 2266 villages. As per the available ASDMA data, presently Barpeta, Morigaon, and Goalpara are the three most affected districts where locals have been forced to evacuate and move to neighbouring highland areas. In Barpeta, which is situated in lower Assam, more than three lakh people are to be delivered with relief materials. The first wave of the flood was reported around late April and since then, a large portion of the Assamese population is living in distressed conditions. The Brahmaputra River is still overflowing near the regions of Jorhat and Dhubri. Even its tributaries, Dhansiri and Beki are reported to be above the danger level at Numaligarh in Golaghat and at Rd. Bridge in Barpeta respectively.

In Morigaon, nearly 2.7 lakh people have been displaced and are in dire need of help. Schools are mostly serving as relief shelters. According to government sources, authorities have opened 273 relief camps and 52 relief distribution centres where people are being provided with food, drinking water, and tarpaulin. About 125,000 flood victims are sheltered in these relief camps. Despite these responses, incidents of death are increasing with 34 deaths reported.

The Kaziranga National Park (KNP) has been severely devastated by this flood. Home to nearly two-thirds of the world’s one-horned rhino population, the park is nearly submerged. The flood has taken its toll on the wildlife. As per information obtained from the forest department, 311 animals are dead, which include 22 one-horn rhinos. 221 hog deer have been found dead. Forest officials have claimed that they have successfully rescued 106 animals.

The state government along with the army, the National Disaster Response Force (NDRF), and the State Disaster Response Force (SDRF), has been carrying out operations even in the remotest of the flood-hit areas. Several NGOs and organisations have also set up rescue camps. Helicopters are being extensively used to drop supplies where people have taken refuge.

According to government sources, the major cause of this disaster was the lack of maintenance of river embankments. About 5000 km of river embankments were not repaired, which is suspected to have led to this crisis. The Union Home Minister Rajnath Singh has done an aerial review of the flood-affected districts of Nagaon, Morigaon, and the Kaziranga National Park. After which, he announced a compensation of ` 4 lakh to be given to each of the flood victims.

The Assam State Government under Chief Minister Sarbananda Sonowal has decided to build new embankments with latest technologies and scientific expertise to combat future erosion. The state government is planning to approach the Asian Development Bank and World Bank for financial and scientific assistance.

A natural disaster of this scale will impact livelihoods. It has been reported that above 20000 hectares of crop area is under water. This will surely impact farm produce and agro-based industries. According to trade analysts, this flood will have a long-term effect on the agricultural sector as the soil texture will alter.

In terms of connectivity, Assam forms the link between the north eastern (NE) part of India and the remaining part of the country. But due to floods, bridges and roads are either submerged or have been completely washed away. Even the railway tracks are under water. As a result, the entire NE is getting partially cut off from the rest of the country. This disaster has affected the social as well as economic infrastructure of the state. Properties worth crores have been damaged.

From the reports of ASDMA, it appears that the primary initiative to prevent future floods of this magnitude should be premised around the strengthening of embankments. Sediment deposition is also a problem as it congests the natural outlay of the Brahmaputra River. Measures related to drainage should be enhanced and regular dredging should be ensured. Special plantation drives should be undertaken in the upper catchment area where deforestation has been a matter of concern. The government should also curb illegal encroachments alongside the river banks.

While natural calamities cannot be prevented, a comprehensive disaster management plan should be in place to reduce their impact. The situation in Assam may improve in future with coordinated actions of both the central and state governments.