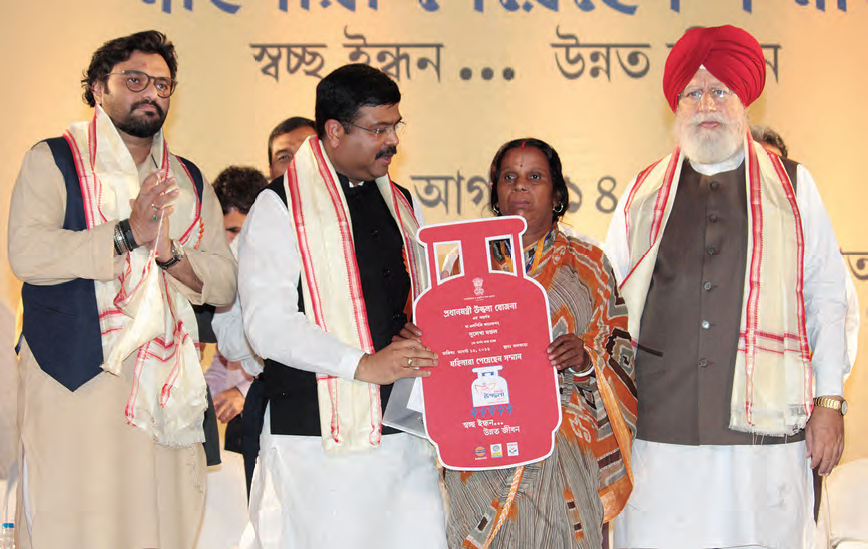 The NDA government has initiated an ambitious scheme to provide LPG connections to the families living Below the Poverty Line (BPL). The scheme, Pradhan Mantri Ujjwala Yojana (PMUY) can make a considerable difference to rural India.

The Budget 2016-17 is aimed to address rural distress by creating fresh investments and generate demand. While introducing this scheme during his budget speech, the Finance Minister, Arun Jaitley said that using an open fire for cooking was akin to smoking 400 cigarettes. He said, “We have decided to embark upon a massive mission to provide LPG connection in the name of women members of poor households. I have set aside a sum of `2000 crore to meet the initial cost of providing these LPG connections. This will benefit about 1.50 crore households below the poverty line in 2016-17. The scheme will be continued for at least two more years to cover five crore BPL households. This will ensure universal reach of cooking gas.” Prime Minister Narendra Modi initiated the PMUY at Ballia in Uttar Pradesh in May this year. Subsequently, several regional launches have also taken place in the states of Gujarat, Rajasthan, Madhya Pradesh, Uttrakhand, Odisha, Bihar, Haryana, and Chhattisgarh. Within three months, more than 33 lakh beneficiaries have been addressed. The Ministry of Petroleum and Natural Gas is set to extend the benefit of the scheme to 1.5 crore beneficiaries during the current financial year.

PMUY focuses on the welfare of women belonging to the BPL category. Under this scheme, five crore LPG connections will be provided to BPL households with a governmental support of `1600 per connection in the next three years.

The identification of BPL families will be made on Social Economic Caste Census (SECC) – 2011 data. Providing LPG connections to BPL households will ensure universal coverage of cooking gas in the country. The scheme will not only reduce drudgery and cooking time but will also provide employment in the supply chain of cooking gas. The government will also provide EMI facilities for meeting the cost of stoves and refills.

Shri Dharmendra Pradhan, Minister of State (I/C), Petroleum & Natural Gas said in his speech while implementing the scheme in Kolkata, “The Government of India is going to invest around `3000 crore in various projects in the state of West Bengal to augment the LPG supply system and enhance the employment availability by adding close to 10000 new jobs.” He also said that they are going to release 60 lakh new LPG connections in the coming two years.

Main objectives of the scheme

l Reducing the serious health hazards associated with cooking based on fossil fuel and fire wood.

l Reducing the number of deaths in India due to unclean cooking fuel.

As stated earlier, the government has allocated `2000 crore for the Ujjwala Yojana for 2016-17 and has planned to distribute LPG connections to about 1.5 crore BPL families within the current financial year.

The government has also made a budgetary allocation of `8000 crore for the implementation of the scheme over three years. The scheme will be implemented using the money saved in LPG subsidy through the  “Give-it-Up” campaign.