People lack awareness regarding the danger posed by e-waste. It is becoming the fastest growing solid waste stream in India. There are informal sectors that use unscientific methods that cause harm to human health and environment. But there are other companies that see e-waste management as a matter of concern and are working to create awareness about it.

Namo- eWaste Management Ltd. is a start-up by Akshay Jain who was inspired by the waste management system in the UK while he was studying there. He says, “All kinds of wastes are segregated, identified, and disposed as per the specified norms in all the cities of UK and recycling mechanism is at place. I was inspired by their waste management system and started thinking about implementing some of the techniques in our country countering the local challenges that are present. India definitely lacks the kind of infrastructure required for hazardous waste management and that became an inspiration for me.”

In 2015-16, the company started operations in the last two quarters and generated a modest revenue of `35 lakhs. In 2016-17, their revenue has grown to `4.35 crores and they are targeting to achieve `40 crore in the current financial year. Their staff includes 25 professionals and technicians along with 40 skilled and semi-skilled workers. 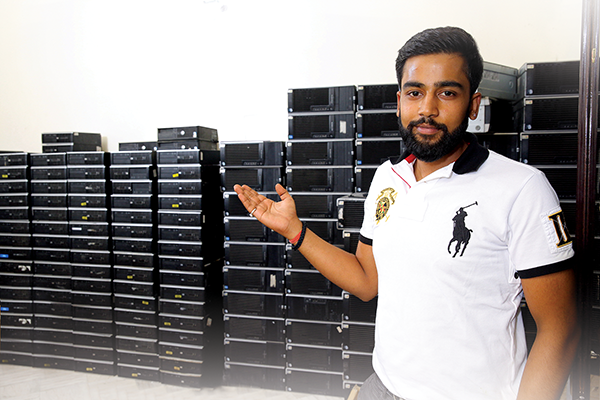 How do they do it?

This start-up is offering a complete model for collection, storage, transport and disposal of e-waste. They collect e-waste from industries, offices, and institutes in a B2B model, transport it to their plant at Faridabad, and recycle the waste as per global standards. For B2C, they collect e-waste from housing societies and Residents Welfare Associations (RWAs) by organising awareness and collection drives and are paying the best value to the consumers. They have also come up with an online model (app-based) for buying and selling second hand electronic products. This is an online marketplace with modern tools to make it user-friendly. Their recycling plant is R2 certified, which is a top accreditation.

The services that Namo-eWaste Management offer include-

Data security - Protection of confidential data is an important concern for many organisations. They provide transparent 3 X data destruction services which include data destruction through software, hard disk degaussing and hard disk shredding.

Asset recovery/refurbishment - They give a new lease of life to the discarded electronic devices by repairing them at the lowest cost. The refurbished products are available at less than 30% of the price of a new product with the same brand value and customer satisfaction. They are also giving standard warranties on these products.

Responsible recycling - The scrap items are put through dismantling and recycling operations for metal and non-metal valuables recovery from them. The entire process is done in a controlled system that ensures that there is no harmful emission. The recovered valuables are sold as commodities to the respective recyclers. The hazardous material is disposed as per the norms.

“We look forward to expand to all the 35 states and UT’s in India with at least one collection facility in each. At our recycling facility, we are looking forward to install a precious metal recovery plant from e-waste to extract gold, silver etc. This will make us one of the most prominent facilities in the world. This will come at an investment of about `20 crores,” says Akshay Jain.

The biggest problem that the country faces when it comes to e-waste management is the lack of awareness. E-waste is still not seen at par with solid or liquid waste and people still don’t understand that it is equally harmful to the environment and can cause hazardous diseases and affect air and water. “India is a developing country and hence our environment has to suffer for this development. We rank high in the most polluting counties in the world and worst is our cities and towns. But unlike China, the growth story of India should be more sustainable for the environment,” says Jain.

His start-up organises various e-waste collection and awareness drives at schools, institutes, RWAs, housing societies etc. Through these events they spread awareness at consumer level about hazards of improper e-waste recycling. Namo also delivers door step services for collection of e-waste. “The focus is prima facie on awareness about segregating e-waste from other forms of waste so that it doesn’t end up in dustbins. We have also placed some e-waste drop bins for the consumers for their low value wastes. We are also doing social media campaigns as well as other media campaigns for awareness. This is a way to reach out to masses and also present a solution at the same time,” adds Jain.

The government has come up with various initiatives for environment’s protection and a new set of rules were laid out in 2016 for e-waste management. Jain added, “The intent of the government is very positive but the implementation of these rules at the grass root level is a matter of concern. The government should also organize mass level awareness campaigns to make the people aware about the hazards of e-waste. This includes setting up e-waste bins in the cities, a dedicated e-waste collection facility for the users to dump their e-waste there and providing right solution for the end to life disposal of e-waste.”