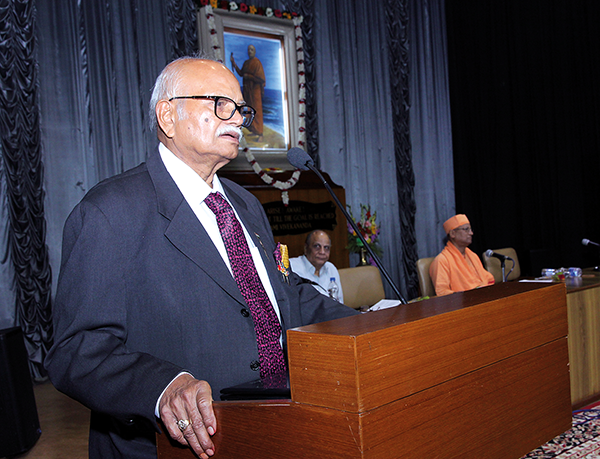 The Abahon magazine in collaboration with the Ramakrishna Mission Institute of Culture (RMIC), Golpark, Kolkata, and the SREI Foundation recently organised a day-long programme to commemorate the 125th year of the Chicago Speech by Swami Vivekananda and 150th birth anniversary of Sister Nivedita. The pro-gramme titled “Shraddhanjali – A Tribute to Divine Trinity and Sister Nivedita & Awaken Youth,” was organised in the Vivekananda Hall of RMIC, Golpark, Kolkata.

Dr. H.P. Kanoria, who is the Chairman of SREI Foundation & Universal Spirituality and Humanity Foundation and an eminent industrialist, philanthropist and social awakener, was the Programme Chair. The event was also attended by Swami Suparnananda, Secretary, RMIC, Kolkata. An issue of ‘Abahon’ magazine was also released on the occasion.

The event was initiated by devotional songs sung by Sushanta Dutta. This was followed by a talk by Shakti Prasad Mishra, an eminent educationist. He explained the relevance of Swami Vivekananda’s Chicago speech and Sister Nivedita’s ideology in the present context. Anup Gupta, a prominent social activist was the convenor of this event.

He added, “Life is adventurous. It is a journey full of joys and sorrows. For this reason, Swami Vivekananda said, ‘Awake, Arise, Fear Not, take an idea, work on it till the goal is not reached’. We have to work, work hard.

We have to have a balanced life. Health is of prime importance. For balanced life we have to have a disciplined life. I am not talking of the haywire ways of the youth. They have to struggle in life to be happy and for that they need to study good books, spiritual books and scriptures. These books will keep the youth inspiring and aspired.

Faith in self, in all, in Guru and in God will keep the spirit of courage and work. Depression will never come. One has to say, ‘I am youth, I am young, full of vitality. In Vedas, it is said ‘AhamBrahmasmi – I am He’. Being the children of God how can we be depressed?

Never close eyes to the reasons. Be like the frog of the ocean, not frog of the well. You also know the story of the lion and the sheep. A lioness gave birth to a cub, and she died. The cub was nurtured by the sheep. The cub started eating the grass and bleating like the sheep. One day a lion came to hunt the sheep and saw the cub just like himself. He roared but the cub did not roar. He wondered what happened. He reached near the cub and took him to the pond. The lion explained in own language to see the face and he roared loudly. The cub realised that he is also a lion and roared.

God has given oceanic power within us so that we can achieve and move mountains with our constant efforts and with faith in self and in God. Fear not as told by Swami Vivekananda. We fear about success in exam, about health, achievement in life, health of our parents and dear ones.

So we have to realise that we are the children of God and we have to affirm ourselves that we are young, healthy and we can achieve. We have the power and ability to achieve.

Fear not poverty. Poverty is also a trial to achieve. There are many people who were extremely poor but they have achieved. Fear not criticism. Work with faith and righteousness. Fear not ill health. Think and affirm that you are quite healthy.

Once Rishi Aurobindo was in Tokyo. There was an epidemic disease. People were leaving from there. He said, I am well, nothing can affect me and the epidemic disease did not affect him.

Hindu Dharma has taught the world universal tolerance and acceptance. Vedanta theory tells us the universal soul is in all. So there is no difference and we are all children of God. We are brothers and sisters. So, let there be no hate, no criticism.

Thakur said, own dharma, own religion is mother. Other religions are Mother’s sisters. Rituals are the first steps. Through concentration, meditation and love one can realise God, talk to God and see God.”

The young students of Disha Foundation performed an excellent piece on Swami Vivekananda. The young students of Knowledge Prabhat of the Birati Globe Vision Society showed the audience what could be done with “power of mind”. The entire auditorium was impressed with their power of medi-tation. The interactive session with Swami Tadvratananda, Shakti Prasad Mishra, and Bandita Bhattacharya was stimu-lating. Amit Kumar Chatterjee, a renowned police officer, and Anindita Ray who has researched on addictions, presented their experiences while working to prevent fatal addictions.