OVER-FISHING BEHIND SPIRALLING PRICES OF HILSA
00:00 am 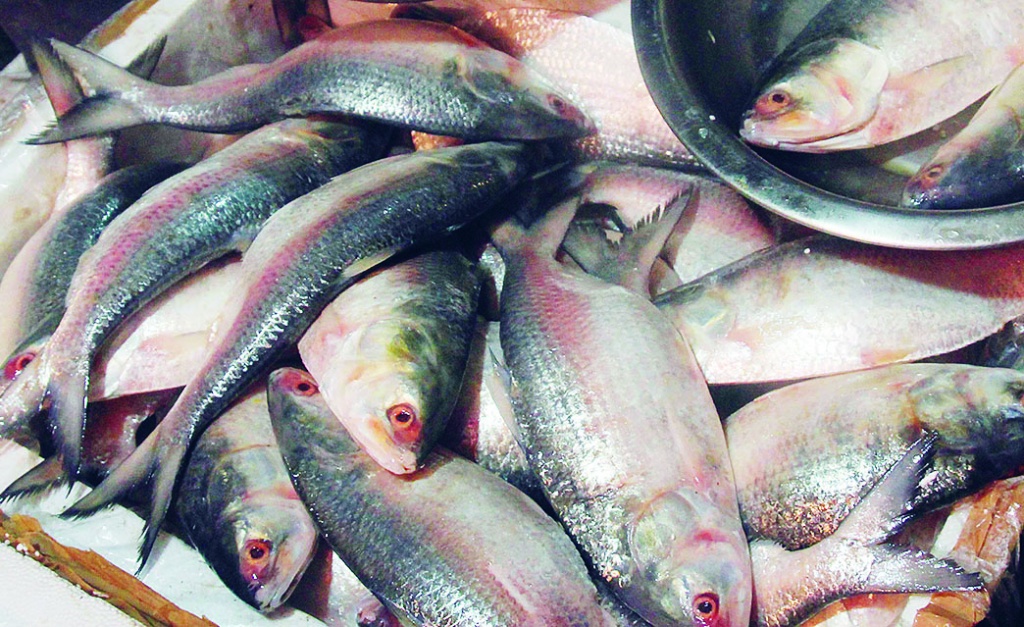 The rainy season is eagerly awaited by most Indians. However, for the quintessential Bengali, the rainy season is synonymous with the hilsa fish (illish mach). The much sought after fish, has transcended culinary boundaries and has ascended to a position of an established cultural symbol.  A pair of this fish (joda illish) is considered auspicious in Bengal. Apart from Bengalis, this fish is savoured by Telegu, Assamese and Odia people and also by those in the Sindh province of Pakistan.

This marine fish belongs to the herring family (Clupeidae) and is found extensively in South Asia. The basic habitat of the fish is the depths of the Pacific Ocean. However, prior to every rainy season, shoals of this fish make their annual journey towards the sweet water rivers of Bangladesh, India, Pakistan, and Myanmar in order to spawn. Food connoisseurs inform, the hilsa fished in the sweet water rivers of India and Bangladesh are superior in taste compared to the ones fished in the brackish high seas of Bay of Bengal.

The Manicktala fish market in north Kolkata is buzzing with activity on a soggy Saturday morning in July. The much-awaited rain clouds have finally arrived over coastal Bengal, bringing rain and relief. Retired college lecturer Shymal Das has braved the morning drizzle and mucky Kolkata streets to shop for his favourite hilsa. He scourges the market for the fish but remains dejected at the end of his quest. The market has a fair share of the fish. But all the fish on display are undersized and weigh less than a kilogram. This probably sums up this year’s despairing situation for the fish loving people of Bengal.

The present crisis concerned with the availability of hilsa which are of a certain size (1 kg and more) can be traced back to a political quagmire involving India and neighbouring Bangladesh. The fish contributes about 12% of the total fish production and about 1% of GDP in Bangladesh. Yearly, around 5,000,000 tonnes of the fish are caught globally. Among them, 50%-60% are caught by Bangladesh, 15%-20% are caught by India, Pakistan and rest 5%-10% are caught by Malaysia, Thailand, China, Vietnam, and Sri Lanka.

The crisis generated in 2011, when Bangladesh stopped exporting this fish to India when the deal to share the water of the Teesta River fell through, mainly due to the opposition of the West Bengal government, which feared sharing the water with Bangladesh would push the northern regions of the state towards an acute water crisis during the drier months. Bangladesh, which depends substantially on the Teesta water, reacted by stopping the export of hilsa to India.

Atul Das, President of Fish Importers Association, informed BE, “This political decision is behind the spiralling prices of hilsa prices year on year. Previously, large amounts of hilsa were imported from Bangladesh, which stopped after 2011. The year 1998 had seen an import value of `1500 crore of hilsa.” A major fish importer himself, he had imported hilsa worth `140 crore that year. He continued, “The following years had also seen large imports and till 2011 the import value never fell below ` 200 crore.”

The present situation is starkly different. With the import from Bangladesh gone, the domestic demand has to be solely catered by the domestic market. This has cause a hike in prices and also certain ecological problems.

The Indian fishermen now are forced to fish smaller fish which, if given the opportunity, would have grown to be fully grown. This spells an ecological catastrophe as catching large amounts of such small fish may force the species into extinction. Fishermen at the fishing port of Kakdwip informed BE that the nets used to catch hilsa have been replaced by nets with smaller gaps, which are designed to retain even the small fishes, including smaller hilsa, which were earlier allowed to swim away through the large gaps. Das also informed, “Due to the massive demand, fishermen are not allowing the fish to swim into the sweet water rivers of India. Instead they are sailing deep into the Bay of Bengal to catch the fish, which at that point are small and of inferior taste.” He attributed the huge price of the fish in markets to the zero imports from Bangladesh, which comprised a significant amount of the fish available in Indian markets. Additionally, there are about five stages of repeated transactions before the fish reaches the consumer. Heavy percentage of profiteering in all the stages also contributes to the rising prices of hilsa.

The West Bengal government had passed a regulation in 2013 that stated hilsa below 500 grams and less than nine inches will not be caught or sold. This was done to preserve the fish. However, according to industry insiders such rules are not considered seriously and the government remains in denial.