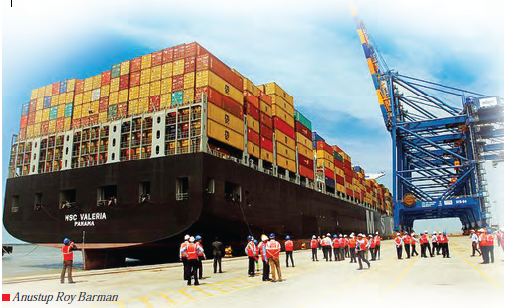 India had only five major ports, namely, Calcutta, Bombay, Madras, Cochin, and Visakhapatnam, when it became independent in 1947. Today, 11 major ports and 139 operable intermediate and minor ports serve its 6000 km coastline. While the increase in traffic at the major ports has been 9.9% last year, minor ports have accounted for a higher growth at 10.3%. However, the latter’s contribution to total cargo traffic is marginal.

The intermediate and minor ports fall under the concurrent list and are administratively under the control of the respective state governments with the central government providing technical assistance. It may be noted that the major ports have been handling around 90 % of the sea-borne traffic in India. It is interesting to note that the share of minor ports has been on the rise over the last few years. Containerization has brought about revolutionary changes in the concept of general cargo handling. India joined the container era rather late, in 1973 with the provision of interim container handling facilities at Cochin and Bombay ports.

Containers and their uses

The idea of shipping boxes that could be loaded onto trucks, moved to trains or ships and then loaded back onto trucks was conceived by Malcolm McLean, a small time truck hauler from Maxton, North Carolina, U.S.A. On a trip to deliver cargo to the Port of Hoboken, he had to wait for half a day while the trucks ahead of him were unloaded slowly and then loaded back on to the ships. It struck him that if the cargo could remain in the trucks and the containers could be placed on the ships, it would save a lot of time. It took him another 15 years to realize his dream.

The first container shipment left Newark on April, 1956. It carried 58 containers and travelled to Houston. It took another decade and the help of the U.S Navy for the container to evolve into an international standard verified commodity.

The 20-foot container, referred to as a Twenty-foot Equivalent Unit (TEU) became the industry standard reference and now cargo volume and vessel capacity are commonly measured in TEU. The 40-foot length container – literally 2 TEU became known as the Forty-foot Equivalent Unit (FEU) and is the most frequently used container today.  The container size needs to be standardized for their full and easy utilization. The containers need to be of same size, so that they can be arranged efficiently in various transportation modes.

The country’s 12 major ports handled a combined volume of 2.12 million 20-foot-equivalent units from April to June which is roughly 70% of India’s overall container trade as compared to the 1.99 million TEUs a year earlier. The JNPT accounted for 1.14 million TEUs, up by 3.28% from 1.11 million TEUs in April to June 2015. Port-operated Jawaharlal Nehru Container Terminal increased cargo volume by about 23% on a year-over-year basis to 399,304 TEUs.

Major and non-major ports do not have a strict association with traffic volumes. The classification has more of an administrative significance.

The world’s largest manufacturer of shipping containers saw profits in the first nine months of the last year soar by 66% on the back of renewed demand for both dry and reefer units.  Sales of dry containers topped a million TEU with a rise of 23%, while sales of reefer units were up by 29%.

This demand is largely dependent on the economy and industry of the specific country. A research paper compiled by Drewry Maritime Equity Research said, “We forecast growth of 11% /5% /9% in the annual global box deliveries for the industry in 2014/15/16, driven by favourable demand-supply dynamics in the container shipping industry. In addition, we expect the box replacement demand to grow, albeit slowly during 2014-16, primarily because of the opening of new re-sale outlets in regions outside the more established markets of Europe, North America and Australia, and in developed Asia.”

Maersk’s statement that the new vessels would allow the carrier to keep pace with container demand that is set to grow by 5% to 8% every year has become obsolete. In last August, Maersk trimmed its forecast for global container demand to be around 2% to 4%, down from 3% to 5% previously.