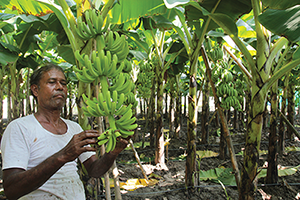 Practices in banana farming and its health benefits
13:32 pm

In Hindu religious texts, God Vishnu said this about the banana fruit- “As the bark and leaves of the kadali tree are to be seen in its stem, so thou art the stem of the universe and all things visible to thee.” For thousands of years, bananas have thrived in the Asian subcontinent and are hugely popular as a tropical fruit. It was popular among Europe’s aristocracy. The US too celebrated its 100th anniversary of the declaration of independence by featuring a banana as its exotic focus of attraction.

The mention of bananas in the ancient Hindu religious texts signifies that bananas are an integral part of t Indian culture. Apart from the religious significance, bananas nutritional value and health benefits are wide. Besides, bananas have long been the cheapest fruit at the grocery store and are quite affordable for the poor sections as well. One banana is said to be about 126 grams and contains 110 calories, 30 grams of carbohydrate and 1 gram of protein. Bananas are naturally free of fat, cholesterol, and sodium. The nutritional value of bananas is proteins, carbohydrates, dietary fibers, micronutrients, and minerals.

According to an article published by The University of California, bananas first appeared in India around 6,000 BC. The same article stated that the Kuk valley of Papua New Guinea witnessed the first site of banana domestication.

Banana grows all round the year and is regarded as the nation’s seventh largest crop. At present, 26 out of 29 Indian states grow bananas. As per research by Researchgate, “The maximum positive trend in area was observed in Andhra Pradesh (8.42%) followed by Gujarat, West Bengal, Karnataka, Tamil Nadu, Madhya Pradesh, Bihar, and Maharashtra. Likewise in production, maximum positive growth was noticed in Gujarat (13.37%) followed by Andhra Pradesh, West Bengal, Bihar, Karnataka, Tamil Nadu, Madhya Pradesh and Maharashtra. In case of productivity, maximum growth rate was observed in Bihar (8.20%) followed by Gujarat, Andhra Pradesh, West Bengal, Tamil Nadu, Madhya Pradesh, Karnataka, and Maharashtra. The lowest-yielding state is Rajasthan, growing just one tonne of the fruit per year.”

According to Union Agriculture and Farmer’s Welfare Minister, Radha Mohan Singh, “The total production of banana in the country is around 14.2 million tonnes. India holds number one position in the world in the area of banana production and stands at number three in acreage which is 13% of the entire acreage and 33% of the total production.”

Sunil Kajaria, CEO, Keventer Foods told BE, “Banana has got very interesting statistics. India is the largest producer of banana in the world, but export is almost zero or may be half a percent and is mainly dominated by western India and is exported to West Asia. From eastern India nothing is exported, because the variety that we grow here is traditional.”

India’s soils support banana varieties. However, farmers only cultivate roughly 12 local and 30 exotic varieties commercially, each of which varies subtly in their taste, appearance and aroma. According to the book, “Fruit Crops,” India mostly exports Dwarf Cavendish and Robusta varieties, and locals consume Poovan, Rasthali, Virupakshi, and Chakkarakeli varieties.  Banana cultivation is the most widespread agricultural practice in the fruit segment in India and has seen a robust growth with the implementation of new agri-business practices and technologies.

Recently, Keventer Agro Limited (KAL), India’s only integrated banana cultivator (producing, ripening and distributing) in the organised sector has secured around 100 acres of agricultural land for growing bananas and is likely to cover around 2000 acres within the next two years and will involve over 5000 farmers.

KAL has instituted Keventer Assisted Farming (KAF) programme under which Grand-9 (G-9) tissue culture plantlets will be provided to the farmers to ensure a significant higher yield and enhanced fruit quality. The G-9 yields are significantly higher than the traditional variety and therefore increase yield from the current 26.83 MT per hectare to 50 MT per hectare (which is at present being achieved in Tamil Nadu under G-9 cultivation). It will also yield more in a shorter period which is three crops in 27 months. Furthermore, G-9 bananas are more consistent in size and quality. This ensures higher consumer acceptance.

Sunil Kajaria said, “Keventers has been the largest seller of bananas in West Bengal for the last 5-6 years. But recently, we have undertaken a programme to start farming or rather to help farmers of West Bengal to help improve their practices. And this eventually leads to doubling of yields and consequently their incomes. So we have taken a number of initiatives to double yield involving modern cultivation practices and by involving technology.” The bananas which are produced by Keventer Agro are ripened using ethylene, which is an advised method by The Food Safety and Standards Authority of India (FSSAI) to ripen fruits.

Kajaria added, “Keventer however always has been a West Bengal focused company and West Bengal is ideally suited for banana cultivation. It has the right soil, it has the right amount of water and it has the right temperature. But yields are still very poor as compared to other stated because farmers have always done traditional farming. With the G-9 farming, we are hoping that yield will increase by two folds. In future we will go to Bihar, Jharkhand and the north eastern states.  We have grown about seven times in the last five years.”

Farming bananas could not only diminish vast barren lands but also curb poverty and malnutrition.

lPotassium protects the body against strokes and heart diseases.

lBananas are a natural antacid.