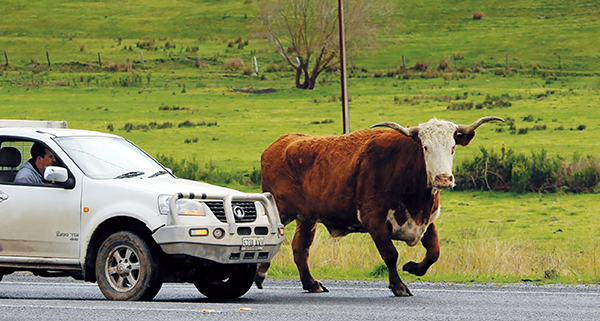 I feel sorry for the magnificent animal that is the bull. I was at a banking mela organised by the local administration in Alwar. A bull wandered in and walked about harmlessly. Almost every stall keeper hit him. Bystanders hit him. Security guards attacked him. His only reaction was to try and dodge them, which given his size, was impossible. Finally, he left, bruised and sore.

Bulls go to vegetable mandis to eat the discarded vegetables and fruits. So many bulls are attacked with acid to the extent that it is difficult to find a bull that doesn’t have acid burns. In Gorakhpur, the city named after Gau Raksha, the municipal administration catches them regularly, puts them into pounds and refuses to feed them. They die within the first week, spending most of their time lying down, as they have no energy left. No gaushalas take bulls, so they roam the streets and are beaten and abused. Many are rounded up at night and sold to illegal butchers. Some are taken by fake mendicants, branded with trishul images, painted and paraded for alms. Some are grown for fighting, as in Jallikattu, where they are starved and blinded, made mad with alcohol and then let loose to be jumped on.

The word Nandi means joyous. In real life the bull leads a life as a victim of beating, torture, starvation which leads to early death. Our great passion for Nandi the bull, exists – as it does for Hanuman and for Ganesha – in temples only. In fact, the three animals – the rhesus monkey, the elephant and the bull are all violently treated in India. No one feeds them as they would cows. No one wants them. And now, as they grow rarer, your children will never see them in all their glory and might.

Nandi is the Mount and gatekeeper of Shiva and Parvati. He is the Chief Guru of 18 spiritual masters, including Patanjali and Thirumular. He is the controller of 18 siddhis or spiritual attainments. Not only is he the being that meets you first in a Shiva temple but there are many temples devoted to Nandi alone. In Sanskrit the name of the bull is Vrishabha, which means righteousness or Dharma. He is the protector of Dharma and the chief of the team of Ganas, or attendants of Shiva. It is important to seek the blessings of Nandi before proceeding to worship Lord Shiva. He symbolizes purity as well as justice, faith, wisdom, virility, and honour. He provides the music to which Lord Shiva performs the Tandava or the cosmic dance. In the Brahaddharma Purana, Nandi is the commander of Lord Shiva's army. Spiritually, Nandi represents the individual soul focused on the Atman.

In the Saura Purana, Nandi the bull is described in all his splendour, with ornaments that glow with the fire of thousand suns, three eyes, and a trident held in his hand. The most common depiction of Nandi is a sitting bull with folded limbs. He is either black or white and wears a necklace with a bell. Other depictions of Nandi show him as half human and half bull. His body resembles that of Shiva in proportion and aspect, although with four hands — two hands holding the Parasu (the axe) and Mruga (the antelope) and the other two hands joined together in the Anjali (obeisance).

the form of a bull as no one else can bear Shiva. According to the Vayu Purana, Nandi was the son of Kashyapa and Surabhi.

Some Vedic texts give the story of Nandi. The great sage, Shilada performed penances and prayed for an immortal child. The child that emerged from the fire of the yagna was named Nandi by Shilada and, by the age of seven, was well-versed in all the sacred scriptures. But Shilada was told the child would die in a year. Grief-stricken, he shared this with Nandi who prayed to Lord Shiva. The god responded by giving him a necklace with the bell, transforming him into half man, half bull and gifting him immortality while making him head of the Ganas and his own Vahana. Shilada and Nandi went to Lord Shiva's abode, Mount Kailash and dwell there for eternity.

Another story speaks of how during Sagar Manthan,or the churning of the ocean, the snake king Vasuki was used as a rope. The churning brought out such deadly poison that none of the devas or asuras wanted to go near it. Lord Shiva drank the poison. Some of it spilled out. To save his master and all life, Nandi drank the spilled venom. Lord Siva calmed their fears saying, “Nandi has surrendered into me so completely that he has all my powers and my protection.” Nandi survived the poison and even the Devas and the Asuras were awestruck at his massive power.

He is said to have taught Kartik, the son of Shiva and a great warrior, the art of warfare. Many people whisper their prayers into the ears of the Nandi. This comes from another story. Shiva decided to meditate and Nandi decided to do so as well and sat in front of his lord. During this meditation, the asura Jalandhara abducted Goddess Parvati. The gods asked Lord Ganesha to inform Shiva, but he could not bring his father out of his meditation. Then Ganesha whispered the details into the ears of Nandi the bull and Shiva heard and awakened. From there comes the belief that anything told to Nandi reaches Shiva.

Once Ravana mocked Nandi. Nandi retaliated with a curse that Ravana’s kingdom would be burnt by a monkey. This came true when Hanuman went in search of Sita. The largest Nandi in India is in Aimury in Kerala. The largest numbers of bulls are killed in Kerala. Andhra Pradesh, Karnataka and Tamil Nadu have large Nandi temples. But I would the readers to see if they can find any bulls either on the road or in Gaushalas of these states. All over India, the little male calves are killed even before they can mature into bulls. Those that are fortunate enough to reach adulthood, rarely make it past four years of torture.

In the new temples devoted to Shiva, the scrotum of Nandi is not sculpted any more in case it embarrasses the same women who come to worship Nandi and ask for fertility. And truly, no one wants the uncastrated bull any more. Either he should be a bullock, with his testicles crushed to a pulp with stones and then made to work. Or he should be a cow – milked and then eaten. But a wild natural creature that roams free is not held in high esteem. It is beaten up and starved or injured and packed to the slaughter house. Instead of using his virility to impregnate cows, we can do it with semen collected from bound creatures who deliver semen artificially which is induced into the cow by vets.

Shiva is Nandi. He refuses to be domesticated. He refuses to behave as society wants him to. He is sometimes the progenitor of his Goddess’ children but never their father. He will not be fettered. And just as we are scared of the goddesses who will not be married and depict them as ugly, wild and drinking blood – as against the tamed, beautiful consorts, Shiva is shown as wild and angry. This, unfortunately, is our opinion of the bull – a dangerous, wild creature that should be eliminated. Feed the bulls in your area. Stop them from being killed.