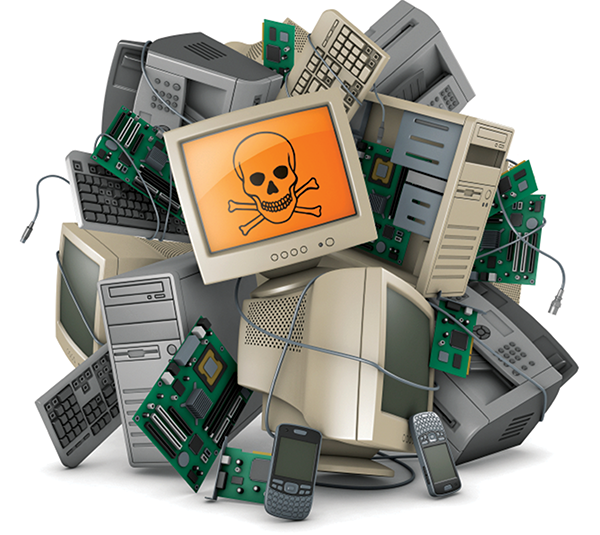 According to a report published by the Environmental Protection Agency of United States (UNEP) in 2015, 75% of the defunct electronic items are not disposed due to lack of knowledge regarding its disposal globally. Electronic products that have become futile contain hazardous components, depending on their condition and density. This is detrimental to human health and the environment.

According to the study of “The Ministry of Environment, Forest and Climate Change, Government of India” in 2016, India has emerged as the second largest mobile market with 1.03 billion subscribers, but has also emerged as the fifth largest producer of e-waste in the world, discarding roughly 18.5 lakh metric tonnes of electronic waste each year.
Telecom equipment alone accounts for around 12 % of the e-waste.

The most effective solution to tackle the discarded e-waste products is to recycle the raw materials from the abandoned electronic items. A variety of materials, including metals that can be reused, constitute most electronic devices.

A huge variety of products can come under the possibility of recycling, such as monitors, keyboards, laptops, hard drives, floppy drives, modems, telephone boards, compact disks, mobiles, fax machines, printers, CPUs, memory chips, connecting wires and cables. Different parts comprising of hazardous substances are dismantled at the start of the recycling process. Toxic substances like cadmium, palladium, rhodium and lead solder present in electronic equipment need to be disposed scientifically to avoid contamination. Strong acids are used to remove valuable metals like lead, copper and gold. The e-waste composition can be quite varied across different categories of electrical equipment and can contain more than a thousand different elements.  In India, the situation demands strong steps to recycle electronic and electrical equipment. It is important to choose the right kind of recycler that performs according to the guidelines and adopts eco-friendly tools to handle the e-wastes.

In order to minimize the volume of waste generation, reusing equipment after certain modifications, can be a useful method. It is effective for computers and mobile phones.  It is also advantageous for the users, as they get paid in the process.

Landfill is another principal method of controlling e-wastes disposal. Soil is gouged and trenches are made for burying the e-waste. However, landfill is not a safe solution as venomous substances like cadmium, lead and mercury are discharged in the groundwater and soil.

Incineration, which is a controlled combustion process, is a useful method in which the waste material is burned in specially designed incinerators at a very high temperature. It reduces the waste volume and a few of the environmentally hazardous substances are metamorphosed into less hazardous ones. This process can also pose a threat as it emits harmful gases.

The E-waste Management Rules 2015 were presented by the Government of India on June 10, 2015. The rules came into force from October 1, 2016, in which the producers were, for the first time, included under extended producers’ responsibility.

The environment ministry has enforced strict rules on manufacturers, dealers, retailers and refurbishers of electronic goods to ensure that electronic or e-waste goods are collected and scientifically recycled. The new norms included fines, states involvement in policing and collection and bringing exhausted compact fluorescent lamp (CFL) and other mercury-containing lamps under the purview of electronic waste.

The rules addressing e-waste have been in place since 2011. The new rules notified that producers will have to ensure 30% e-waste collection, based on their projected sales by 2018 and 70 % by 2023. This can be done by regulating a series of solutions such as deposit refund scheme and an e-waste exchange policy. The companies are required to pay for publicity and awareness programmes.

The New Management Rules, 2016 prescribes stringent financial penalties for non-compliance. However, the unorganised sector in India is estimated to handle around 95 % of the e-waste produced in the country. The challenge lies in bringing awareness and training to half-a-million unorganized workforce countrywide who collect e-waste.  Presently, according to industry sources it is troublesome and expensive for the handset manufacturers to achieve the targets prescribed in the rules. There are suggestions that state e-waste collection targets are better implemented in a phased manner with lower and practically achievable target limits.

State governments need to organize e-waste dismantling and recycling units in industrial parks and register workers involved with the e-waste disposal and focus on the safety of these workers. Though states are involved, equipment manufacturers need to take a single-point clearance from the Central Pollution Control Board to get their collection centres approved. On the other hand, many experts opined that the rules are extremely stringent and difficult to implement. Channelization of E-Waste to Authorized Recycler-A Viable Business Model.

Experience of DISHA in Kolkata

DISHA, a local partner of the project tried to motivate some dismantlers and traders to set up processing units to ensure responsible recycling. The project intended to organize the informal sector for people in e-waste recycling.

So far two groups have agreed to set up dismantling units. It should be noted that setting up of a proper recycling unit involves a huge amount of investment. Some fund can be mobilised by the unorganized workers (around `10 – `20 lakh) towards setting up of authorised dismantling unit so that after dismantling the segregated dismantled waste can be sent to authorised recyclers. First group formed P U Steel & Electro Processing Pvt. Ltd and the second group formed Seikh Tiwari Electronics Pvt Ltd. Both of them are registered companies under Company’s Act.

In the recent period informal collectors were the main target group. DISHA had worked with them earlier. The basic objective was to divert the travel route of e-waste from informal to responsible authorised formal sector.

DISHA took another effort to organize the primary collectors so that they form Self-help groups, sort and store e-waste on their own. They themselves tried to sell those direct to the authorised recyclers. Their rate of profit would be very high as they could get a price of `15 to `18 from the authorised collectors. This could not happen as they cannot store or hold their item for a period. Their livelihood depends on daily earning and spending. They cannot continue transaction with bank though support and handholding were provided towards bank linking.

DISHA’s experience indicates that if little support is available from the producers of electric and electronic equipment under Extended Producer Responsibility (EPR) or Corporate Social Responsibility (CSR), authorised collection centres can run with economic viability. The middle level collectors can be motivated and supported to channelise their collection of e-waste to the authorised recyclers.