SBI MERGER WITH ASSOCIATE BANKS SIGNALS MORE SUCH MOVES TO BOOST THE SECTOR
00:00 am 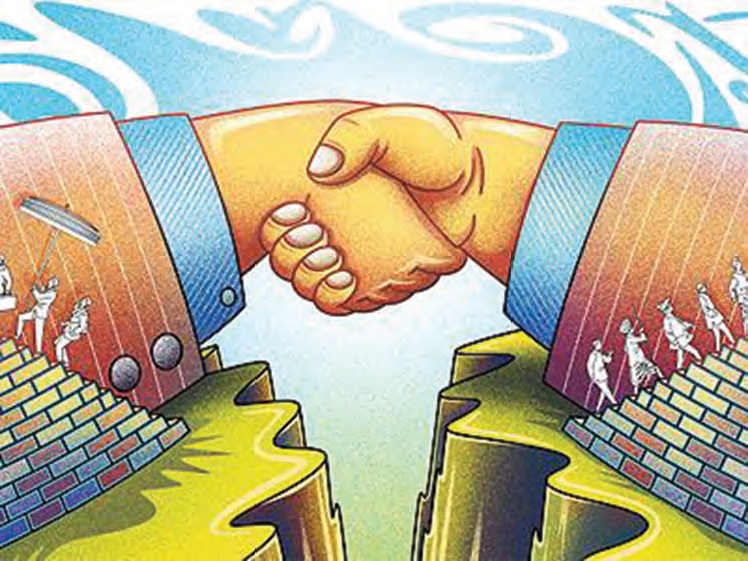 In a major move towards banking consolidation the authorities – the Union Government and the State Bank of India (SBI) Board- have decided to merge the associate banks with the SBI. The central board of directors of the SBI has already accorded its approval to the scheme of acquisition of the State Bank of Bikaner and Jaipur (SBBJ), State Bank of Mysore (SBM), State Bank of Travancore (SBT), and Bharatiya Mahila Bank Limited (BMBL) by the SBI.

In the long run, more such moves are expected. The government plans to hold more such mergers featuring PSU banks in future. The banks will be more competitive globally and will have stronger capital base following consolidation.

The phrase “small is beautiful” doesn’t hold true in the present times. The big is powerful and as far as the global economy is concerned, only the powerful entity survives.

The Indian government started the process of bank mergers this August starting with the country’s largest lender, the SBI, in which the government has a 61.32% stake. The merger included the Bharatiya Mahila Bank (BMB), which was created by the UPA government in 2013, has a capital of `1,000 crore.

However, it is not the first time that the SBI organised such mergers. Earlier, too, the SBI had merged two of its erstwhile associate banks with itself, namely, the Bank of Saurashtra in 2008 and the State Bank of Indore in 2010.

The latest merger will create financial assets worth `37 lakh crore ($550 billion), including the fixed assets of associate banks worth `4,000 crore.

Speculation over a merger of state-owned banks has been in the air since the Finance Ministry made public its intent to cut down on the total number of public sector banks to about 10 or less from the current 27.

According to the financial experts if the merger goes through, the SBI will be ranked as the 45th largest bank globally in terms of assets, up by 7 points from its current 52nd position. In the post-merger scenario, the cost-to-income ratio will come down by 100 basis points a year.  After the merger, the SBI’s employee costs could rise by `23 crore a month. The five subsidiaries have about 6,400 branches and 38,000 employees. As of 2014-15, the SBI had more than 14000 branches including 191 foreign offices spread across 36 countries, with employee strength of 2,22,033.

When compared to the ICICI bank, which is the second largest bank in the country the SBI’s consolidated position will be well ahead both in terms of employee strength and number of branches. However, in order to ensure synergistic benefits the SBI will have to rationalize branch network and employees as there is some duplication of branches and costs currently. The areas of operations are overlapping in many cases.

The proposed merger is likely to be completed much before the end of the current financial year. Arundhuti Bhattacharyya, Chairman, SBI, expects to have a combined balance sheet for the financial year ending 2016-17. SBI’s current balance sheet on a standalone basis stands at ` 28 lakh crore, which will account for about 75% of the total assets of the new entity. The bank has already sought “in-principle sanction” from the government to enter into negotiations with subsidiary banks to acquire their businesses. The swap ratio will only be worked out before getting final approvals from the two stakeholders – the Reserve Bank of India and the government. If the merger takes place successfully, it will be the country’s largest merger exercise.

One of the major banking unions, The All India Bank Employees’ Association (AIBEA) wants the five associate entities to be merged into a separate, single large bank, instead of all of them being merged with the SBI.

According to informed sources, the merger exercise may face legal hurdles and resistance from employees and trade union bodies, which may delay the process.

There has been an incident which has created a furore in Kerala over the merger issue of State Bank of Travancore (SBT), with SBI which has resulted in transfer of SBT’s Chief General Manager, S. Adikesavan for reportedly questioning the fairness of the merger scheme. The incident prompted Kerala Chief Minister Pinarayi Vijayan to send a letter to Prime Minister Narendra Modi. It was expressed in that letter that SBT was virtually bulldozed into the merger plan without following the due process.   Analysts also fear the move will lead to higher operating costs in the near-term for SBI.

Sajan Peter, IAS (Retd.), Independent Director on the SBT Board, said, “I opposed the merger procedure as it was done without following the due formalities. There was no discussion or negotiation between SBT and SBI for the merger. It was virtually steamrolled … all the decisions were taken by the SBI and the proposal was just put across. As the chairman of the SBT’s audit committee, I cannot agree to this kind of merger.”

The scheme of the merger has clearly made a mention of the negotiations. According to media sources, Adikesavan told the audit committee there was no negotiation with SBI on the merger. He had written a note to the management in August stating that due process should be followed and employees and customers should be taken into confidence. K.S. Krishna, General Secretary, State Bank of Travancore Employees Union, said, “However, the SBI management was stage managing all the decisions on their own and asked SBT officials to put their signature. They have not taken into account the sentiments of people, customers and the Kerala government.”

In his letter to the Prime Minister, Chief Minister Vijayan said the government should take suitable action as the decision to transfer Adikesavan to SBI’s Hyderabad office was an act of vengeance, that too before the merger could be completed. He stated in his letter, “The stand of people in Kerala and the government is that there should not be a merger of SBT with SBI. Kerala Assembly also adopted this stand. As this is considered as a vengeful act, Prime Minister should intervene to ensure justice.”

The Kerala Legislative Assembly has recently passed a resolution against the merger of SBT with SBI, stating it would adversely affect the state’s economic growth. The resolution, introduced by the Chief Minister, sought rescinding of the decision to amalgamate SBT with SBI by the Centre and the Reserve Bank of India.

However such initial blocks need to be eased by dialogue and cooperation. It is well accepted that the merger will make the banks a stronger entity. The Indian Banks will be able to create more solid database of potential customers and other borrowers. While the Indian banks have been passing through a very difficult phase of high ratio of Non-Performing Assets (NPAs), the mergers may address the issue. The banks will also be ensured a huge capital base and solid asset structure will enhance their performance.