IN SPITE OF TALL CLAIMS GOVERNMENT HELP TO SMALL TEA GROWERS IS MINIMAL
00:00 am 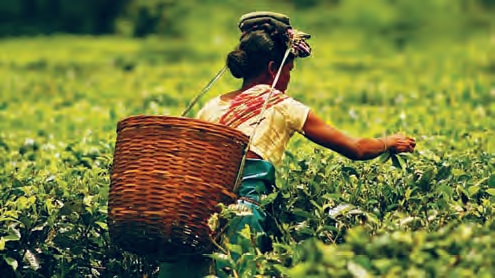 The twenty-second session of the inter-governmental group on tea was held at Naivasha, Kenya, on May 25-27. Ninety-two delegates were present from all the tea producing countries of the world. At that session, different problems relating to tea industry and their possible solutions were discussed at length. The group noted that the world tea production grew at 1.2% to 5.3 million tonnes (MT) while the consumption grew by 2.4% to 4.95 MT. So 2014 left a surplus of 180,000 kg in the global tea market as a whole. This was the reason for decline in price by 5.35% in the FAO Composite Tea Price. On the other hand, export volume declined by 2.4% to 1.73 MT and export value in 2014 was $ 5.16 billion, 4% less than that of 2013. More and more countries have been entering into tea production. On the other hand, global tea industry is facing several crises. Production has been increasing and at the same time, surplus production has also been a problem in many countries.

Many of the small tea producers are not in a position to prosper if some measures are not undertaken. The group noted that production and market uncertainties, adverse climate change, weeds and disease infestations, etc. are responsible for making small-holders’ income unsustainable. In some cases, incomes of some of the small-holders are so low that those are below the national and international poverty levels. The group has decided to take several steps to lower demand-supply gap. Then the small-holders will be benefited.

During the last two to three decades, the number of small tea growers (STG) in India has been rising. Earlier, the tea estates were the main tea producers and the holdings were very large. A section of small tea growers started growing tea in their own small holdings near the established tea gardens. Then a section of young men began to plant tea by taking land on lease. In the beginning, tea plantation was lucrative. But gradually problems rose. A number of tea factories were also set up in those areas where small tea growers planted. The factories are known as bought leaf factories as they buy leaf from small tea growers and are not under the big tea gardens. So small tea plantations and bought leaf factories have been made for each other. Bijoy Gopal Chakraborty, President, Confederation of Indian Small Tea Growers Associations (CISTA), said that at present, in Bengal, STG produces about 40% of the total tea. In south India, the share is as big as 70% where as it is 27% in Assam. The share of STG is expected to be 50% by 2020.

The government help to small tea growers is not satisfactory

There are 72 lakh employments in three lakh STG gardens of India. The potential is huge for STG if governmental help is available. A few years ago, the UPA government set up Small Growers Development Directorate. A total amount of ` 200 crore was allotted for the development of small growers. To provide finance for setting up tea factories and infrastructure for small growers were the main purposes of that fund. But  sources said that almost nothing has happened on these matters.

Regarding selling of tea leaves, the tea board of India fixes minimum prices. The prices are fixed on a monthly basis. In last May, it was ` 15.35 per one kg of tea leaf. But the sources said that bought leaf factories purchase leaves at not more than ` 11 a kg in Jalpaigudi and other places of West Bengal. But at the late hours, that is, after 3pm of any day, the growers have to sell leaves at ` 3 or 4 or 5 per kg. This illegal trading has become a norm and the Jalpaigudi Tea Board and other related authorities do not take proper action when they are informed. One small grower in north Bengal told the reporter that when they would complain at proper place, police and bureaucratic action come on occasion. But that type of action comes at a time when all the leaves are sold to the factories. In the factories, there are almost no proper documents of such distress selling. There is always a huge pressure from the factories on the STGs. The late comers have to sell leaves within 3 to 4 hours of plucking otherwise the leaves would start rotting. In that case, tea leaves have no use value. Some of the small growers said that sometimes, they could not realize even the transport cost of the leaves from garden to factory.Chakraborty said that the cost of small growers’ leaves is about ` 11 per kg. “If this is the situation then how will the small growers improve the quality of leaves and compete in the market?,” asked Chakraborty.