Swami Vivekananda: An Excellent Exponent and Expander of Basic Indian Philosophy
00:00 am 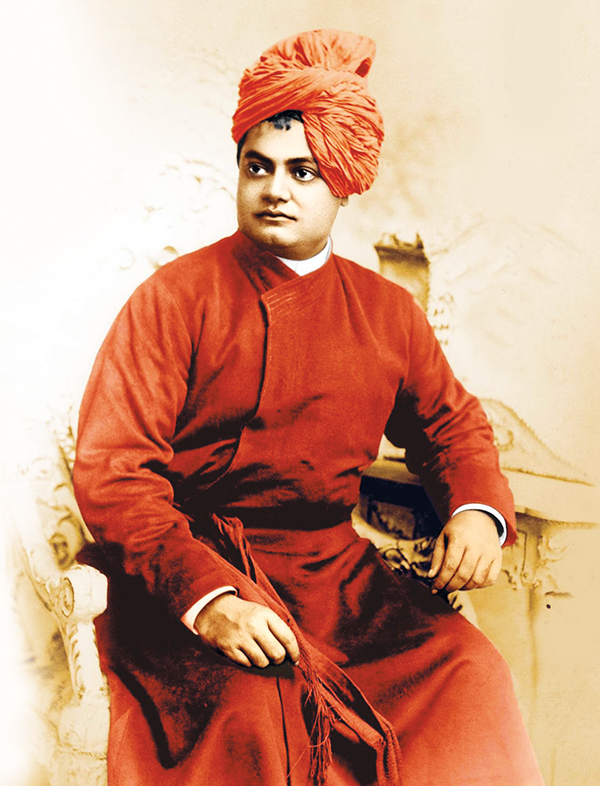 To understand the contributions of Swami Vivekananda in totality, one needs to delve deep into the fundamentals of Indian philosophy. For this purpose, familiarity with foremost concepts of the basic Indian philosophy is necessary. These concepts include the universal unity –creature unity, interdependence of everything – movable or immovable on one-another while essentially staying within the scope of the eternal Law of Change and human divinity. A thorough understanding of the various aspects of Indian philosophy will be essential to know Swami Vivekananda.

Indian philosophy includes various schools of thought. Besides, Hinduism, Jainism, Buddhism and Sikhism originated from it. Theist and atheist, both are the components of Indian philosophy. Along with all the six leading
Vedic-Hindu schools of thought –the Nyaya, the Vaisheshika, the Samkhya, the Yoga, the Meemamsa and the Vedanta, various branches of knowledge such as the Pashupata (Shaivism), the Shaiva (theistic Samkhya school), the Pratyabhijna, the Raseshvara, the Panini Darshan or the Ajivika are within the ambit of Indian philosophy.

Indian philosophy gives due importance to Dharma, the Karma-Sanskara, the state of Dukha in life –its root cause
and cessation of grief or sorrow, the Dhyana-Chintana –mediation-contemplation and the Nirvana –liberation of the Soul as the ultimate goal of life. All branches of Indian philosophy share these concepts. Along with this, the most important thing or reality, which becomes evident from a fair or prejudice-free study or analysis of fundamentals of any of the schools of thought of Indian origin, is that the Vedic-Hindu philosophy is the most ancient in the Indian subcontinent. It could also be assessed that the Vedic civilization developed about 4000-8000 years ago in the Indian subcontinent. Thus, the Vedic-Hindu philosophy is the fountainhead of almost all schools of thought in India.

The Vedic–Hindu philosophy stands on four pillars. The first of the fundamentals of the Vedic-Hindu philosophy is its belief in universal unity. Almighty Ishwara –Paramatma, Parameshwara or Parabrahman is Himself the maker of
the universal unity. He is Himself the supreme director of the universal order and the upbringer of His creatures. The Vedic-Hindu philosophy embraces the reality of the eternal Law of Change and calls for active goodwill towards living beings in all situations. The eternal Law of Change expects a human being to keep evolving in all walks of life according to the demand of time and to involve himself in welfare oriented activities.

The entire ideas of Swami Vivekananda and his works can be well assessed keeping in mind the above-mentioned fundamentals. Swami Vivekananda accepted the authority of God – His perfection in all manners, and the basic source of the Dharma. In his own words, “I believe in God” and “my mission is to show that religion (the Dharma) is everything and in everything.” Hence, the Dharma of the conception of Swami Vivekananda is the manifestation of God Himself. It is His Order. God Himself is the basic source of the Dharma. The Dharma in its true form guides man at every step – at all levels in all walks of life to get him well realized and discharge his duties towards humanity. His following statement can also be assessed getting his broad viewpoint regarding the Dharma as the nucleus, “If there is ever going to be an ideal religion (the Dharma), it must be broad and large enough to supply food for all minds. It must supply the strength of philosophy to the philosopher, to the devotee’s heart, to the worshipper and to the ritualist. It will give all that the most marvellous symbolism can convey to the poet, it will give as much of heart as he can take in, and other things besides...”

It is only the Dharma, which makes one capable to obey the Authority and the Rule of God. Through the Dharma one can realize and embrace the reality of universal unity and draw inspiration to work for this. It is the key message of the Vedic-Hindu philosophy –teachings of the Vedas and the Upanishads. Swami Vivekananda conveyed this very message continuously through his addresses. He said, “Our watchword...will be acceptance, and not exclusion. Not only toleration, for so-called toleration is often blasphemy, and I do not believe in it; I believe in acceptance.”

In this very perspective divulging the ever significant aspect of the basic Indian philosophy, which calls for infinite love, welfare of one and all and serving the humanity selflessly, Swami Vivekananda put forth, “Good motives, sincerity, and infinite love can conquer the world. One single soul possessed of these virtues can destroy the dark designs of millions of hypocrites and brutes.”

The Dharma never inspires one to be dependent on anyone or anything, or surrender to the lower instincts in a state of compulsion. The Dharma is the Eternal Order – God manifested and it is well and predominantly defined in the Upanishads – the Vedanta. The Dharma leads one to become his own pathfinder and reminds him of his duties towards humanity. The Dharma shows one the way to discharge responsibilities through righteous acts. In the words of Swami Vivekananda, “Religion –the Dharma is that which does not depend upon books or teachers or prophets or saviours, and that which does not make us dependent in this or in any other lives upon others. In this sense Advaitism of the Upanishads is the only religion.”

Swami Vivekananda rightly accepted human beings to be the best of the creatures of God. Regarding man’s superiority in the creation of God, he has beautifully mentioned, “Man is the highest being that exists, and this is the greatest world. We can have no conception of God higher than man, so our God is man, and man is God. When we rise and go beyond and find something higher, we have to jump out of the mind, out of body and the imagination and leave this world; when we rise to be the Absolute, we are no longer in this world. Man is the apex of the only world we can ever know. All we know of animals is only by analogy, we judge them by what we do and feel ourselves...”

Revealing the truth of the Advaita Vedanta, he declared every human being –woman or man equally to be divine, the possessor of divine virtues. Thus, everyone is similarly the holder of the highest position among the entire creatures. According to the Advaita Vedanta, Brahman and Atman are not different realities. Rather, they are identical, the eternal, all-pervading realities underlying all existence. They are two different labels for the one and the same reality behind all the objects. Through the realization and development of divine virtues one possesses, and making them the basis of his Karmas, thus transforming Karmas in the Satkarmas –the righteous acts, he can achieve the ultimate truth. He can become identical with Ishwara –can become one with God, which is the ultimate goal of life. The statement of Swami Vivekananda himself divulges this reality in which he said, “To emancipate myself from earthly ties and attachments so that there will be no rebirth for me. When I die I want to become at once absorbed in the divine, one with God. I would be a Buddha.” As an excellent exponent and expander of the basic Indian philosophy, Swami Vivekananda worked throughout his life. His life remained dedicated till the last breath to this great cause.

Swami Vivekananda called his fellow beings to take human welfare as the prime duty of their life. He urged human-equality in the Indian context. He desired man to offer  service to humanity, taking the motto and principal practice of his life to be the best way to follow the Dharma and reaching the Satya –God.

Today, when crores of people are hungry all over the world and are without shelter, deprived of basic needs like medical facilities and have no means to live a decent life, the significance of the message of Swami Vivekananda multiplies manyfold. His message reminds those ‘haves’ to discharge their responsibilities towards the ‘have-nots’ and to support those who are depressed, helpless, poor and underprivileged.