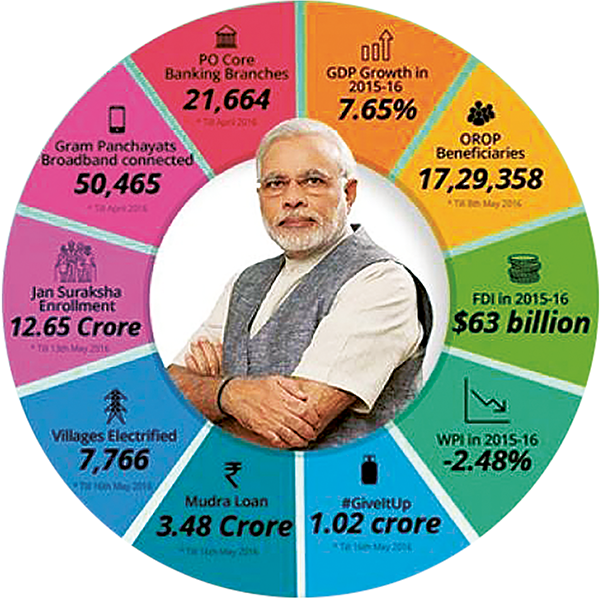 The Narendra Modi led NDA government completed three years in office this May. It was the first time in three decades (since 1984) that the single largest party was successful to draw absolute majority in Lok Sabha elections. The Modi government has initiated a slew of reforms and introduced a number of social welfare schemes. To convince the people in general and the opposition in particular, the government is now working on rolling out a ‘report card’ of its achievements in the last three years. Let us evaluate the flagship programmes of this government.

‘Make in India’ was the first big policy of the NDA government that aimed at locating the Indian economy among the leading manufacturing economies. It also aimed to generate better employment opportunities. But there has been no meaningful change in the share of manufacturing, which has been keeping flat for the last decade or so. Further, FDI in manufacturing and the percentage of FDI flowing to the sector has declined in the past few months. The impact of international factors like Brexit, Trump’s win in USA and increase in interest rate by the US Fed cannot be ignored in this context. But this seems to have taken a toll on domestic investment that has dipped, incurring a loss of 550 jobs per day in the last four years.

The second major scheme launched by the Modi government was the Jan Dhan Scheme (JDS) which targeted at providing a bank account (with zero balance) to every citizen above the age of 10 years along with providing accidental insurance cover and overdraft facility. But a survey by MicroSave in 2016 highlighted that roughly one-fourth accounts of total 24.10 crore Jan Dhan Accounts continue to have zero balance and the banks are bearing an average cost of Rs. 140 per account per year for maintenance. Also, the banks were forced to deposit at least `1 in these accounts (to make them alive) which were sourced from different heads like maintenance funds, canteen subsidy and fee obtained for Demand Draft, etc. During the demonetisation drive, black money owners parked their black money in these accounts. The JDS has failed to deliver its purpose.

Swachh Bharat Abhiyan, a mission to eliminate open defecation, eradicate manual scavenging and introduce scientific municipal solid waste management practices is running short of the target. Estimates by Centre for Science and Environment, Delhi highlighted a miserable performance in terms of construction of toilets. In order to realize the mission of ‘Clean India’ by 2019, we need to have 82.3 million more toilets at a rate of 56 toilets every minute. However, the pace at which toilets are being constructed makes the target unachievable. In Varanasi, where 2.3 lakh toilets are to be built, it would take about 32 years at the ongoing pace. An impact assessment study by the National Sample Survey Organization (NSSO) revealed that the villagers are wary of using the toilets built in rural areas and many of them remain unused.

For promoting hi-tech start-ups, the government launched the National Initiative for Development and Harnessing Innovations (NIDHI) which aimed at nurturing the ideas and innovations in the start-up ecosystem. The government created Rs.10,000 crore ‘Fund of Funds for Start-ups’ and roped in the multinational companies like IBM, Microsoft, Target, Google, Tata etc. to promote the start-ups by providing low cost tools. Reports compiled by research agencies like Xeler8 states that 997 start-ups of a total of 2281 that initiated operations since June 2014 have failed in the last two years.

Another scheme, Soil Health Cards (SHCs) was launched for the Indian farmers. It aimed to advise them on soil nutrients in their holdings and specify the dosage of fertilisers required for maintaining the soil health of their land. But the scheme failed to take off.

The demonetisation drive was designed to curb black money, counterfeiting currency and terrorism besides developing a digital economy, has virtually failed on all accounts. This bold initiative got a jolt when nearly 98% of the scrapped currency got deposited in the banks in the
first 50 days. Further, the campaign failed to put any check on the menace of counterfeiting currency or on financing terrorism. The drive however boosted the revenues of companies like Paytm.

GST, which was largely propagated as a radical measure, is yet to see the light of day. Consensus on unified tax rates, exclusion of goods under the ambit of GST, revenue distribution between the producer and consumer states is yet to be arrived at despite a series of meetings between the state governments and the central government.

In yet another scheme Namami Gange, the government approved Rs. 20000 crore for cleaning the holy river which passes through five major Indian states. However, of the total amount approved only Rs.3633 crore (18%) has actually been allocated and of that, only `1836 crore (9%) has been spent in the past three years. Henceforth, no significant improve-ment is visible in terms of cleaning. In fact, where 6087 million litres of waste water was flowing into Ganga in 2013, it stands at 7500 million litres today. There are many more schemes like Krishi Sinchai, Smart City, Kaushal Vikas, Garib Kalyan and UDAN that were kicked off enthusiastically but failed to achieve their objective.

The next two years are going to be the decisive. The government should not feel complacent on account of its victories in municipal elections in Delhi or state assembly elections in Uttar Pradesh and Uttarakhand.