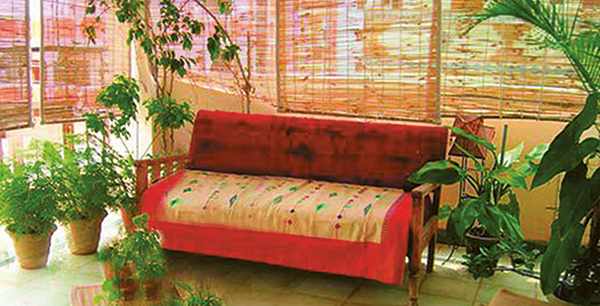 Smart architectural designs can significantly contribute in keeping a structure cool and pleasant. Centuries ago, latticed screens or “jaali” filtered direct sunlight into palaces. The effect was decorative and helped to reduce the heat. Similarly the Hawa Mahal in Jaipur, in Rajasthan is an interesting example of a naturally cooling structure. The Rajput palace built in 1799 by Maharaja Sawai Pratap Singh uses the principle of ‘Venturi Effect’ of physics. The air that blows into it is compressed, very similar to the laws which are used to operate our modern day air-conditioner. The air is reflected through Hawa Mahal’s curvy linear bay windows, keeping the whole structure cool. Additionally, the Hawa Mahal is made of limestone and that added to its unique designing, makes it a very climate responsive  building.

BE had reported last year, that a unique intervention was being organised in Bangladeshi villages using this very principle of physics. Discarded soft drink bottles were cut and mounted on cardboards with the nozzle fixed on
perforated cardboards. These mounted cardboards were  attached to windows of tin houses in Bangladeshi villages and could successfully reduce the interior temperatures.

Water is another natural cooling agent that was extensively used in Indian architectures. The Pearl Academy of
Fashion in Jaipur remains 20 degrees cooler inside during the searing summer months. While the exterior appears to be keeping with the trends of contemporary design, at the base of the building is a vast pool of water -- a cooling concept taken directly from the step well structures developed by the Rajputs over 1,500 years ago.

Manit Rastogi, who designed the academy, informed, “When water evaporates in heat, it immediately brings down the temperature of the space around it.” This  simple concept was used extensively in Rajput and Mughal architectural planning. In Iran, where temperatures can be very extreme, pool houses are being seen as classical cooling structures. Pool-house is an independent or dependent house to a building and the pool is located where the subterranean water is flowing into the central courtyard to cool the space in hot summer days. Study of ancient Roman architecture indicates that there were provisions for piping water through the walls of houses to cool the brickwork and lower the room temperature. Ventilation is another key feature of natural cooling. Wind towers are an integral element in traditional Iranian architecture. It facilitates available natural ventilation which is known as an important principle for conserving energy.

In India khus mats are used extensively to keep rooms cool during the summer months. These mats are woven from khus roots and provide a natural way of keeping the home cool. However, the mats have to be kept constantly wet for a greater cooling effect. A natural way to keep your home and surroundings cool and oxygen-rich is with plants. Potted plants located strategically inside the house and kept constantly wet and watered can considerably reduce the inside temperatures. Well-located deciduous trees on the eastern and western sides of a house can also be considered. A moist lawn can also cool the house. Vines on trellises are fast  becoming a popular cooling option as the dark, coarse leaves absorb solar radiation and release water vapour which has a cooling effect.

Another interesting and indigenous way of cooling a room is to hang a clothesline close to the house so as to ensure that the breeze blowing in through the wet clothes cools the room. Hanging wet clothes inside the room, preferably near the windows can keep the indoors cooler.

Reflective window coatings are another way of keeping off the heat. Besides cutting off the glare from the sun, it protects the upholstery, drapes and carpets from fading.  However, tinted sun control film can also darken the room.

Solar shading is another important method of passive  cooling. The most effective method of cooling a building is to shade windows, walls and the roof of building from direct solar radiation. Heavily insulated walls and roofs need less shading. However, solar shading can be implemented by  using overhangs on the outside facade of the building.