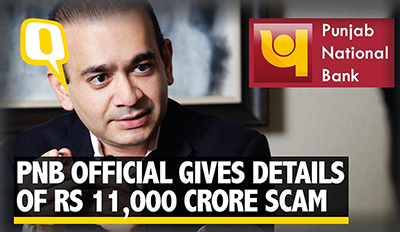 The troubling fortnight that was
15:57 pm

Cheery news always tends to get dwarfed by depressing news. That is the news world’s counterpart of Gresham’s Law in economics: bad money drives out good money!

The news on the economic health released on February 27 gladdened the policy makers and the public alike. The economy recorded strongest growth at 7.2% in the last quarter of 2017 (October –December 2017) after a string of low growth rates from the third quarter of 2016 until now. Though the latest growth rate is much below 9.2% of the third quarter of 2016, the news did raise the sagging morale, much needed, after the setbacks due to poor implementation of  demonetization efforts and the rocky introduction of GST.

The happy news that the economy has been recovering should have been a matter of celebration. It was not.

The mother of all bank frauds

The nation was not in the mood, as the shockwaves giving rise to fears of the failing banking system had not yet subsided.  Just about a fortnight earlier, the news broke about the Punjab National Bank (PNB) fraud of around Rs 12,700 crore.  That was the “the mother of all- time bank frauds”. The detection of the fraud, subsequent investigations, initial arrest of two employees at the branch level and a series of sensational developments culminating in the undetected departure from Indian shores of a leading jeweller, once listed by Forbes as one the world’s rich, now delisted after filing bankruptcy applications after he landed in New York early this month –   were all hitting the headlines.

Fresh revelations on a daily basis did not give any room for rejoicing at the news of economic recovery.

It was an avoidable embarrassment to Government. The PNB is the third largest public sector bank, with market capitalization of Rs 26,737 crore, the first being State Bank of India (Rs 196,320 crore), followed by Bank of Baroda
(Rs 36,505 crore). Not everyone is aware that PNB also enjoys the reported “distinction” of topping the list of banks with a maximum number of bank loan fraud cases: 389 to date, amounting to Rs 65.62 billion over the last five years. It is also reported only a few years ago that PNB, along with a few other banks was cheated by Winsome Diamond Group, another jewellery firm that defaulted on letters of credit (LoCs). The total amount defaulted was about Rs 6,800 crore.

So another one?  Is it due to negligence of supervision by top bank management at the branch and regional levels or failed supervision by the regulating authority? Questions will continue to be asked in the next coming months.

The banking public is already worried about the rising pile of non-performing assets of banks, with public sector banks having more than 80% share of non-recoverable loans of the banking system. The genuine borrowers for undertaking new investments have been finding it difficult to have access to bank credit, since banks are unwilling to lend in view of the mounting non recoverable loans.

What is in store for the economy?

Impact of demonetization of November 2016, resulting in cash crunch and disrupting economic activities, is behind us. The GST implementation procedures have now been streamlined. Reform measures to tackle the bad loan problem (around Rs 82,33408 crore or 10.2% of loans and advances are in place with a huge recapitalization programme of public sector banks (Rs 211,000 crore) with planned auctions of stressed assets underway. Their effects in improving the banking system would take time, three to five years, to clean up the so called twin balance sheets, of the banks and the corporate borrowers.

As pro-reformists would lament that the economy is underperforming, the growth rates are below the potential. With elections just a year away, there is no eagerness to carry out reforms, let alone much discussed, but serious thought has neven been given to privatization of the sick public sector banks.  The task of “belling the fat cat” is now postponed or at best left to the next government. In the meanwhile, an Oxfam study released on Feb 22 a report that the wealth of India’s billionaires (estimated to be 101 including the missing jeweller, a number that was once boasted as a great “achievement” for a developing country), is around 15% of India’s GDP in 2018, increasing from 10% only five years ago.

Structural reforms, though less challenging than privatisation of public sector banks, are also now seen to be given less attention. A Bloomberg columnist refers to a proposal that was announced and withdrawn in less than a week. The proposal was about allowing enterprises, employing less than 300 workers to terminate employment of a non-performing worker without the consent of the government officials, which is now available only to those enterprise employing 100 employees.

Aside from structural reforms, whose impact would not be immediate but felt only in the medium term, there are some emerging concerns before policy makers which need early attention.

Global trade environment, which was recovering rapidly with investment cycle which had favourably turned in a few months ago, has now become unfavourable with the United States announcing imposition of tariffs on steel and aluminium imports. The protection sentiments are growing, with indicated retaliatory actions from major economic powers, including China and the European Union.

These do not augur well for India which is already experiencing rising trade deficits for a while.

Trade deficit rose to US $16.3 billion in January 2018 from US$ 9.9 billion a year earlier giving rise to the highest trade deficit since May of 2013. Imports rose by 26.1% year-on-year to US$ 40.68 billion as against increase in exports only by 9.1% to US$ 24.4 billion. The capital inflows have been supporting all along to reduce the trade deficit. Now it looks difficult to expect the same kind of support with the increasing possibility of US monetary policy getting tightened in view of the latest employment data just released on March 9.

In February, jobs in US grew by 313,000 and the rise was the largest in months; and the unemployment rate is 4.1%, which was the lowest in 17 years. The new chairman of the US central bank early this month indicated there would be at least four interest rate hikes. The first hike now looks likely sooner than anticipated. That means there would be reversal of capital inflows enjoyed by India and other emerging economies. The dollar assets would then begin to give higher returns, diminishing the attractiveness of investing in bonds and stocks in India and other emerging markets. All these are all hot moneys. They would now fly back to US.

That will make the nominal rupee fall in nominal value in terms of dollar. The Indian rupee the other day touched 65 per one US dollar. Imports would be more expensive, widening the trade deficit in rupee terms.

In the meanwhile, domestic inflation is rising. The consumer price index (CPI) has been steadily rising: from 134.2 in July 2017 shooting up to 137.2 in December, only slightly declining to 136.9 in Jan 2018. With oil price rising, things would only worsen. Rise in CPI relative to foreign price level would push up the real exchange rate, which means reduced competitiveness of India’s exports. That is the last thing one would want now, when trade deficits have been widening.

Tough times are ahead, as RBI would not keep the neutral stance any longer. The policy rates have to be tightened. That would make borrowing costs going up, especially when private investment is looking up. So, a return to sensible, conservative macroeconomic policies, including controlling public expen-diture both at central and state levels and keeping down the fiscal deficits from bulging is the priority. That will be a hard choice as elections are coming up closer and closer!