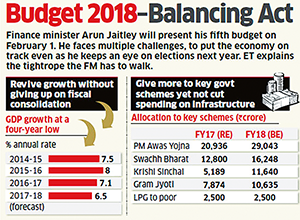 After winning the recent Gujarat and Himachal Pardesh elections, BJP, either directly or in coalition is steering 19 of India’s 29 states. However, looking at the setback that the party received in non-urban areas (particularly in Gujarat), it is likely that the focus will now shift towards the rural economy and the common man. In light of this, the ruling party will try to woo the masses through budget 2018 which incidentally is likely to be the first major occurrence of 2018 and also the last full fledged budget of the present government. But, keeping into consideration the political, economic and international developments in the recent past, presenting a genuinely populist budget is not going to be a cakewalk.

On the domestic front, the government has already taken some audacious measures in this fiscal which are expected to put a substantial burden on the coffers of the government. In the month of October, the government announced a
` 2.11 lakh crore plan to recapitalise the public-sector banks
which are grappling with the mounting NPA problem. Of course, recapitalisation is not taking place immediately, but it’s also truethat the huge amount to be disbursed cannot be arranged in a single day. Planning to look for viable alternatives to build up the treasury calls for all revenue generating and cost cutting mechanisms.

Prior to recapitalisation, implementation of the Seventh Pay Commission (since 2016) had led to a 55% increase in Centre’s total salary and allowances bill (` 1.84 lakh crore in 2016-17) vis-à-vis 2015-16. Supplementing it, the recommendations of Ashok Lavasa Committee (formed in June 2016 to remove the mismatch in the allowance structure) that got the cabinet’s
nod in June 2017 led to an additional burden of` 30748 crore on the exchequer.

Further, in the backdrop of a shortfall in revenue collected under the Goods and Services Tax (GST) and disinvestment proceeds, the projected receipts for the governmenthave gone haywire. Explicitly, the deficiency in average revenue for all the states under GST in the month of October remained 17.6%, although the government is contended that it has come
down from 28.4% in August. Similarly, in context of disinvestment proceeds, against the targeted proceeds of
` 72500 crore for this fiscal, only` 52300 crore could be realised till November 2017.

Besides, in the previous budget, finance minister offered a soothing balm to the individual and corporate tax payers to heal the wounds created due to the stick of demonetisation. Tax rate was reducedfrom 10% to 5% for the individuals having annual income between` 2.5 lakh and` 5 lakh which eventually led to a loss of` 15000 crore to the exchequer. Of course, the loss was attempted to be neutralised by increasing the surcharge on the individuals having an annual income more than` 50 lakh, but how far it has been compensated next month’s budget document will notify. Likewise, the revenue foregone in the process of extending incentives to corporates touched` 83,492 crore which stood` 6635 crore more than the previous year. Barring these domestic issues that led to a massive expenditure in the last one year or so, there are a number of concerns at the international front also that may restrain the finance minister from offering a common man friendly budget.

America’s decision to reduce the corporate tax to 21% from the existing 35% and to resort to territorial tax to revive the economy may create ripple effects for the economiesworldwide. So far, the foreign subsidiaries of US corporations were subjected to higher rates of taxes when they repatriated the profits back to the US. For example, let’s say a subsidiary of a US corporation based in Oman is paying a corporate taxof 12% only. However, if the same foreign subsidiary repatriates the profits to the US, then it is subjected to a corporate tax at a rate of 35% with a credit of 12% that it has already paid in Oman. This high tax rate compel the foreign subsidiaries notto repatriate the profits to the US as a result of which untaxed earnings overseas flits around $2.6 trillion. With a one-time repatriation tax on corporate earnings held overseas, along with different rates for liquid assets (15.5%) and illiquid assets (8%), further payable over eight years in instalments, US corporations get facilitated to repatriate the accumulated profits whenever they want to do so. Certainly, it would lead to an increase in the flow of investment in US corporations from abroad, but itwill cause a problem for the countries like India which in order to attract foreign investment have now to reduce the corporate tax on the same lines as done by the US. Reduction in corporate tax at this juncture probably means cutting down the public spending as the government is already facing a burden of an increase in crude oil prices.

In the first seven months (April - October) of this year itself, India has seen an increase in oil import bill to an extent of $56.25 billion (` 36000 crore) attributed to a rise in the prices of crude oil from $50.9 per barrel to $54.92 per barrel. This increase is expected to reach $90 billion (` 57000 crore) by the end of March 2018 which may widen the trade deficit besides pushing the inflation up, thereby leaving lesser room for an increase in public spending by the government.

Above and beyond, New York-based global credit rating agency Moody’s upgradation of ranking for India from Baa3 (positive) to Baa2 (stable) in 2017 and placing it at par with countries like Italy is a recognition of Modi’s efforts to bring down the fiscal as well as Current Account Deficit (CAD) in last four years. This recognition may offer a boost to investment, particularly foreign investment which in the wake of worldwide recession is fading away. However, living upto the expectations of global rating agencies, it is likely that the government goes along with fiscal consolidation measures thereby pruning the expenditure on welfare programmes.

Amid enduring turbulences, maintaining a balance between a pragmatic and a populist budget is like walking a tightrope.