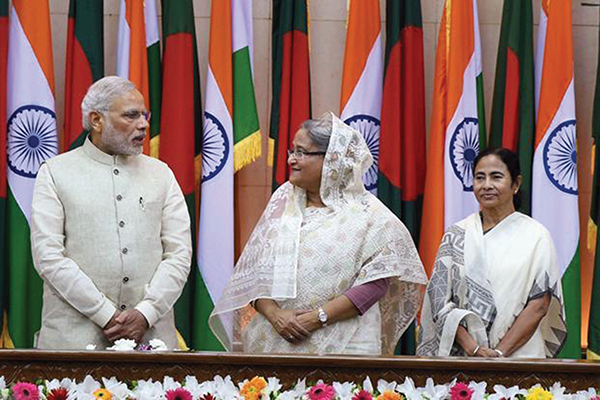 In Bangladesh, the opposition Bangladesh Nationalist Party (BNP) had been upbeat since their victory in the Coomilla Corporation last month. With the Teesta agreement not being signed, they received another shot in their arm against the present government led by the Awami League. BNP is known for their anti-India positioning.

In the recently concluded visit of the Bangladeshi Prime Minister Sheikh Hasina to New Delhi, Indian Prime Minister Narendra Modi promised that the proposed Teesta Pact will be signed in her present term. But the West Bengal Chief Minister Mamata Bannerjee remains wary. She made public her displeasure with Modi’s announcement.

A section of the senior Awami League leaders were baffled by Mamata’s sudden announcement that instead of Teesta, Bangladesh can have water from the Torsha river. Torhsa is not an Indian river. It originates in Bhutan. To execute what the West Bengal Chief Minister stated, a tripartite agreement would be needed that would involve Bangladesh, Bhutan, and India. Torsha has a strong water flow in only the tree months of the monsoon.

Such a stance of the Bengal Chief Minister is being perceived as anti-Awami League by senior Awami League leaders. Abdur Rahman, MP and joint general secretary of Awami League, has said that the Awami League is upset with the entire episode. BNP and Jamat are likely to capitalize on this issue and strengthen their anti-India rhetoric.

A senior Dhaka-based journalist has informed that the Bangladeshi Armed Forces would prefer to buy arms from China. They may not agree to buy arms from India. He further added that though Hasina is still in full control of forces but that may change in future.

The Bangladeshi Prime Minister’s latest India visit could not be termed a total success as she failed to get the Teesta pact sealed. The posturing of the West Bengal Chief Minister complicated matters. Political observers are of the opinion, that by floating the option of Torsha River, Mamata Banerjee played the ‘delaying’ card. She may announce a commission or committee unilaterally. The committee will drag the issue for another 3-4 years. In that case, Prime Minister Modi’s promise will be under threat.

India and Bangladesh have been negotiating the elusive Teesta river water-sharing pact for close to two decades now. The impasse on Teesta is bound to have a negative impact on Indo-Bangladesh relations. The ties with Bangladesh have been on an upswing recently driven by closer cooperation in many sectors.

Since water is a state subject, the Centre cannot do much about the Teesta agreement so long as Mamata Banerjee decides to play hardball. Water sharing pacts are very difficult to arrive at. India and Bangladesh share 54 rivers but there is only one water sharing pact that exists between them, which is the Ganges water-sharing treaty of 1996.

Apart from the complex nature of water sharing negotiations, the Teesta has become a political issue in Dhaka. “Oh, Teesta!” a front-page headline in one of Bangladesh’s leading newspapers, Daily Star, screamed in June 2014, coinciding with the visit of Modi to Bangladesh. “Thin river to continue reminding Bangladesh about prolonged sufferings inflicted by India,” the paper had commented.

In spite of Mamata Banerjee’s Torsha googly, Bangladesh is hopeful about getting the Teesta water and stands firm on its demands. “I believe we will get water and noone can stop it,” Bangladeshi Prime Minister Sheikh Hasina had said recently at a media briefing on her India visit.