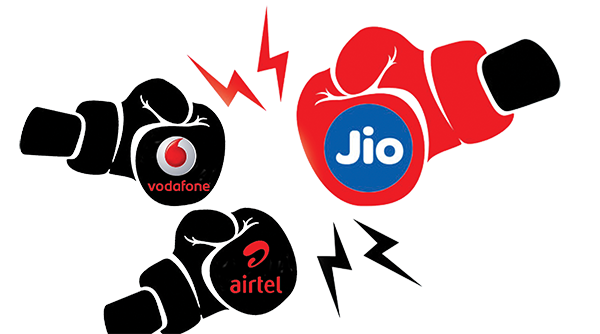 Rashika Singh (22) is fond of her Jio mobile connection. She says, “Jio is student-friendly. It is affordable. It has offered us free mobile data for around five months and I don’t think any other company would have offered the same. Surprisingly, I get the Jio network even while travelling in the underground metro rail.”

Pooja Sharma who uses Airtel, said, “I am thankful that Jio entered the market. It has spurred a competitive market and Airtel has increased its mobile data from 750MB to 10GB with a recharge of Rs. 190. The unused data get added to the next month’s data balance.”

But what Rashika and Pooja did not know was that this trend of providing unlimited free mobile data has largely threatened the telecom industry. Since Mukesh Ambani’s Reliance Jio Infocomm Ltd. entered the market with its offer of free voice calls and three months of free data that later extended to six months, mergers and acquisitions have become inevitable in India’s hyper-competitive telecom industry. The merger between the country’s second largest provider Vodafone India Ltd. and the third-ranked, Idea Cellular Ltd. was one such merger. The merged entity became India’s largest mobile telephone and data service provider with 39.25 crore customers, ahead of the market leader Airtel, which had a 26.44 crore user base. Vodafone India has been valued at Rs.82,800 crore ($12.4 billion), while Idea has been valued at Rs72,200 crore ($10.8 billion). This ensured that the new entity would enjoy substantial synergies on cost and capital expenditure synergies with an estimated net present value of approximately Rs.67,000 crore ($10 billion) after integration costs and spectrum liberalisation payments and had an estimated run-rate savings of Rs.14,000 crore ($2.1 billion) on an annual basis.

Prior to Reliance Jio’s entry, Bharti Airtel, Vodafone, and Idea managed to increase revenue and earnings, even as smaller carriers struggled to make a profit in an industry that needed huge investments in infrastructure and spectrum acquisition.After the launch of Jio, market leaders such as Bharti Airtel and Idea Cellular have seen a reduction of as much as 35% in operating profit and around a 10-percentage-points contraction in operating margins as they looked to match the cost of Jio’s services. Idea Cellular had posted losses for three straight quarters.

To overcome the challenges, Bharti Airtel, leveraging its huge customer base as well as one of the highest monthly billings in the business has battled Jio on the beaches and the trenches. Bharti matched the ultra-cheap offers of Jio and expanded its 4G coverage and spectrum footprint, while increasing its revenue market share to 34%. It has significantly enhanced its revenue and spectrum market share through acquisition of weaker operators such as Videocon, Telenor and now Tata Teleservices Ltd. (TTSL). In most cases, the seller was running out of options.

According to Rajan Mathews, Director-General of the Cellular Operators Association of India, there is currently a tariff war which may not be sustainable for long. This has severely impacted the revenue stream of operators, not just in terms of an increase in costs but also in terms of a marked decline in the revenue stream. All these have put the financial condition of this industry at risk and increased the debt to Rs.4.3 lakh crore which has led to a severe decline in government revenues from the industry.” In contrast to 13 operators a few years ago, the Indian mobile telecom market is down to four or five operators.

The 4G ecosystem has developed well in the country. One of the biggest challenges is to provide quality services on 4G networks. Globally, 44% of 4G networks are deployed over 1800 MHz spectrum because of the efficiency it provides and the lesser number of towers it requires. At the same time, on 2300 MHz bandwidth more number of towers is required which might affect the quality of services.

Bharti Airtel has got 2300 MHz of spectrum for 4G in 15 circles and has purchased 97 MHz of 1,800 MHz spectrum in 15 circles. As per a media report, “It has plans to roll out high speed 4G networks in various circles using FD-LTE (frequency division LTE) technology in the 1,800 MHz band in addition to its existing TD-LTE (time division LTE) rollout in the 2,300 MHz band, giving it a pan-India 4G footprint.

At the same time, Reliance Jio has offered 4G services using FDD-LTE on 1800MHz and TDD-LTE on 2300MHz through an integrated ecosystem. The country’s second-largest operator Vodafone has launched 4G LTE services on the 1,800-MHz band in five circles–Mumbai, Delhi, Kolkata, Karnataka and Kerala, which account for half of its data revenue.

Recently, Reliance Jio has made the ‘Happy New Year 2018’ offer. The company has essentially revamped its existing plans to offer either 50% more data or Rs.50 discount on the price of the plans. The new recharge plans became valid from January 9 2018.Its Rs.149 recharge offer gives users a total of 28GB 4G data for 28 days, which is one of the cheapest rates in the industry. Additionally, Jio’s plans come bundled with free unlimited voice calls, SMS and access to Jio’s suite of apps.

Reliance Jio’s Rs.198 recharge offer now gives 42GB data as compared to the earlier offering of 28GB with a validity of 28 days. The pack has a 1.5GB daily data limit. Airtel’s Rs.349 plan offers 2GB of data per day with unlimited local and STD calls. Users also get free outgoing, national roaming and free SMS (limited to 100/day). The plan is valid for 28 days. The plan previously offered 1.5GB data per day. However, it was recently revised to give users 2GB daily data.

Vodafone users who need 1.5GB 4G/3G data per day for 28 days will have to recharge with the company’s Rs.349 plan. The company is also offering unlimited local and STD calls to any number and free roaming as well. However, it is to be noted that there is a cap of 250 minutes per day and 1000 minutes per week on outgoing calls. Those who opt for this plan will also get a free subscription to Vodafone Play.

After Jio, the telecom sector has seen massive changes involving heightened focus on data and accelerated consolidation of operators. This highly competitive market has now transformed into a five player market. This has resulted in a loss of 75,000 employees in the span of one year according to a report by Economic Times.

With the emerging Vodafone-Idea entity, Teleanalysis cited job losses to the tune of 10,000. India’s telecom major, Bharti Airtel is trying to acquire Tata Teleservices after merging Telenor India with itself. As the incumbent operators keep up with the price war from Jio, it has resulted in selling off tower assets, rolling out new plans and a drastic fall in average revenue per user. The merged company after the merger of Vodafone and Idea also announced selling of their telecom tower assets to American Tower Corporation for a staggering $1.2 billion.

The Ind-Ra analysts believe that a redistribution of market share among existing telcos is underway. Jio’s subscriber base could cross 100 million but the telco’s ability to retain market share would be driven by both pricing as well as user experience of its voice over LTE (VoLTE) technology. It is true that the consumer behaviour and market share will undergo a change after Jio starts charging for its services. The industry could witness an increase in the dual-SIM phenomena in the interim, following which the data and voice usage pattern for each Telco could remain inconsistent and unpredictable. “Retaining customer base will necessitate the telcos to continue to augment their capacity and coverage for superior speed and virtual network platforms. Telcos with a superior spectrum holding will be better placed to compete on user experience,” the Ind-Ra report noted.

India will emerge as a leading player in the virtual world by having 700 million internet users of the 4.7 billion global users by 2025, as per a Microsoft report. Internet economy is expected to touch `10 trillion ($155 billion) by 2018, contributing around 5% to the country’s GDP. With the government’s favourable regulation policies and 4G services hitting the market, the Indian telecommunication sector is expected to witness fast growth in the next few years. The Government of India also plans to auction the 5G spectrum in bands like 3,300 MHz and 3,400 MHz to promote initiatives like Internet of Things (IoT), machine-to-machine communications, instant high definition video transfer as well as its Smart Cities initiative.