A Year in Retrospect What Went Wrong? How to repair the economy?
15:46 pm

The year 2019, witnessed the biggest domestic slowdown in the last decade. It was painful, as the steady fall in the rate of growth was unstoppable. Reasons, which are now well-known and understood, have been documented.

Components of aggregate demand, namely domestic consumption, investment and net external demand which are the driving forces behind the gross domestic product are seen to be declining.

Domestic consumption, accounting for 60% of total demand and including daily necessities like toothpaste and biscuits in the rural parts of India and semi-durables such as appliances and cars in urban areas was along the downward path. The rural sector’s incomes have been deeply affected by falling agricultural incomes and growing financial stress preceded by failure to re-pay debts incurred by farmers. Rising unemployment in the urban sector caused by falling industrial production have been the significant factors behind the decrease in consumption level of durables among the urban middle class. Bank credit influencing consumption has been shrinking.

Declining consumption, which is a function of income, is bound to affect the overall economy. The contraction in car sales in 2019 is the biggest contraction since 2014. The slowing demand for tractors in rural areas has been another concern, reflecting the decrease in agricultural incomes. It is recorded that tractor sales during the first quarter (Q1) of FY 2019 went down by 14%, the steepest fall in four years. The negative multiplier effects from the slow down are always adverse.  Contraction in auto sales leads to decrease in production all around:  steel, tires, glass, and other components which go into making of the vehicles. It also affects selling agents at all points ranging from dealers to promoters and publicity agents.

In regard to private investment, statistics on housing are a dismal reading. About 30 major cities had more than 1.50 million unsold housing units in 2019, which is a clear indication of falling housing demand. Since housing construction is known to have linkages, both backward and forward, with numerous ancillary industries, which include sub-sectors ranging from cement to steel to paints and furnishings, the adverse impact gets much more magnified. The reduced demand for housing has led to fall in property prices and the owners feel their paper wealth has gone down, which would mean that their borrowing capacity has gone.

Investment as a whole, comprising both public and private segments, has been falling. One of the indicators as reported in national income data is gross fixed capital formation, which has been going down from the highest at 34.3% of GDP in 2011-12 to the lowest 27.8% in the second quarter of 2019-20. The decrease amounts to 6.5 percentage points. Under the assumption of India’s incremental capital/output ratio at 4, Professor Rangarajan, a former Governor of RBI has estimated the loss of potential rate of growth by 1.6 percentage points.

One of the causes behind falling private investment is banks’ reluctance to lend to investors, because of mounting bad loans since 2016. Weak appraisal of projects since the Great Bank Mela of the yesteryears after the 1969 bank nationalisation and the growing crony capitalism nurtured by political influences and sheer indifference by public sector banks (PSBs) are the major causes of the current state of affairs. Non-performing assets (NPAs) or bad loans finally landed the PSBs in soup.

According to available data we find banks in both public and private sectors have accumulated NPAs, to the extent of `0.94 trillion in FY 2016-17, `1.86 trillion in FY 2017-18 and of the same amount for 2018-19. The latest ‘Report on Trend and Progress of Banking in India 2018-19’ released in the Christmas week reveals that India’s ratio of NPAs to total loans is the world’s highest at 9.2% followed by Turkey (4.1%), South Africa (3.7%) and Brazil (3.1%).   It has been reported that some PSBs including State Bank of India have underreported NPAs. If true, it reveals only inefficiencies, if not dishonesty, in reporting by banks. 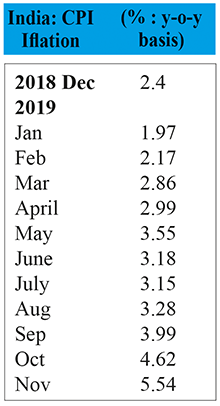 The Reserve Bank of India has been toying with interest rate as a tool during the year. It lowered the interest rate by 135 basis points or by 1.35% to 5.15% in October. The magic of cheap money did not work. Only one third of this rate cut was passed on to customers by banks. As inflation rate on annualized basis rose to 4.6% in October, and with fears of further rise in November (in fact it was close to 5.54%), RBI felt it appropriate to cry halt to a cutting spree. The RBI’s mandated goal is price stability at the target rate of 4%.

Monetary policy work is effective only when RBI wants to control inflation, by making borrowing cost expensive. On the other hand, cheap money does not buy growth. It does not work the other way. It is business confidence that makes the economy move.

Ajay Chhibber, formerly associated with World Bank, observed that the weighted average lending rate (WALR) has gone up over the last one year. In fact since the establishment of Monetary Policy Committee under RBI in 2014, it has gone up in real terms from 2% to around 7% for outstanding loans and 6% for new loans. 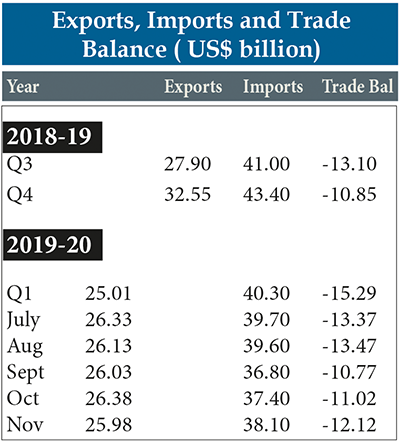 If domestic consumption and expenditure were declining did the export sector come to rescue? Here, we have only disturbing news. In 2019, export earnings have been falling.Net export for April to June 2019 stood at $46 billion. This was almost similar to the net exports for April to June 2018 at $46.6 billion. This is primarily because both exports and imports during the period were at almost similar levels as last year. Given this, there hasn’t been any increased economic activity on the exports front either. The only solace is the narrowing trade deficit. However, that is no comfort at all. In fact, fall in imports is another indication of the slowing down of the economy as India’s imports were growth enhancing capital and intermediate goods. India’s exports comprise mostly of pearls and precious and semi precious stones (16% of total exports), minerals and fuels, oils and waxes (5%), pharmaceuticals (4%), nuclear reactors, boilers, mechanical appliances (5%) and organic chemicals (4%). Most of them are replaceable by exports of the same kind from other trading countries.

If India’s exports have to grow, they have to be competitive with similar goods from other exporting countries. The only way is to make them attractive to foreigners is to maintain its competiveness. The export activity can be encouraged only making the real effective exchange rate (REER) low. 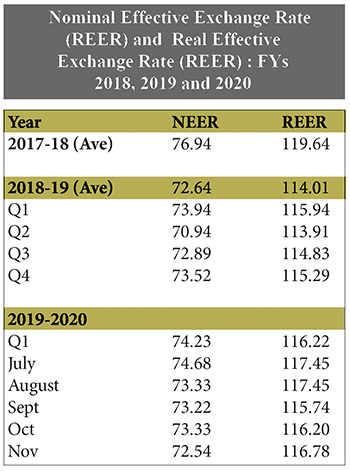 Where do we go from here?

If we consider the domestic conditions are purely cyclical, the solution is countercyclical policies. Monetary policy has its limitations. A total 135 basis point cuts during the year have not worked, as we saw. So will an expansionary fiscal policy work? It did. Against the background of 2008 global financial crisis, a countercyclical fiscal policy promoting public expenditure against limited revenue was adopted which resulted in fiscal deficit of 6% of GDP in 2008-09 and 6.5% in 2009-10. It was worth it.

Can it work now?

With poor supply situation all around, fiscal deficits may take a longer time to work out. But, it will certainly indicate to the business sector that government now means business. It will raise confidence. If public expenditures are in quick yielding projects, they will be helpful. If they are in projects in steps as they have with long gestation periods, they would also raise confidence. An outstanding example is the Indian Rivers Inter-link Project. It is a long time project that aims to effectively manage water resources in India by linking Indian rivers by a network of reservoirs and canals for enhancing irrigation opportunities and groundwater recharge. They would also reduce persistent floods in some parts and water shortages in some other parts.

Corporate tax cuts have been well received. But, the business sector is waiting. Consumers would be happy to receive personal income tax rate cuts. They would certainly induce to consume more of frequently consumed goods as well as semi-durables.

Other than immediate tax relief measures and quick yielding projects, speeding up reforms in various sectors is the prime need of the hour. First and foremost is the financial sector. Commercial banks in public sector need re-capitalisation.  Further, one of the solutions is setting up a bad bank: an idea talked about but not seriously considered is establishing a bank for buying up the bad loans of commercial banks and pursuing vigorous measures to recover bad loans.

Areas of reforms in the medium run, as suggested by leading economists include the following:

(d) selecting a few industries for priority support  as was done regard to auto and pharmaceuticals; 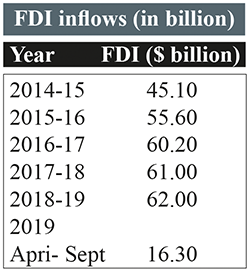 Finally, India cannot ignore global interests. Trade war between China and the US has affected our external trade.  The ASEAN countries took advantage of it in the last two years. Trade diversion of the US trade from China benefited ASEAN nations through trade creation.  Vietnam's exports rose by 30%. The US manufacturing units located in China moved out to ASEAN countries, notably Vietnam where labour is inexpensive and where more FDI friendly policies are followed. India has missed the opportunity to join the Regional Comprehensive Economic Partnership (RCEP). However, the doors to RECP membership are not closed. In fact, some of the partners in RECP are keen to have India to serve as a counterweight to China’s aggressive policies. Negotiations should be quietly carried on.

FDI inflows should be encouraged to come in. The policies have been liberalised.  India moved up to the 77th position in the World Bank’s Index on Ease of Doing Business, though it was pushed to the 68th position from its 58th place in the Competitiveness Index tracked by World Economic Forum. Foreign portfolio investors have brought in more funds. They shifted their attention to buying up more bonds away from the uncertain stocks. India’s reserves have been growing to reach a record high at $454 billion recently. They have not lost hope in India as a safe long term bet. What we now need is improving the business environment by focusing on governance. In the Competiveness Index referred to earlier, we find many ASEAN nations are ranked higher in the ‘institutions’ component. It is the political governance which matters here. We find India has more laws to prevent scams, frauds and corruption.

But, delays in implementation and delays in bringing culprits to justice are enormous. Unless, we make considerable headway in governance, we cannot improve the image of the country and raise business environment and consumer confidence.